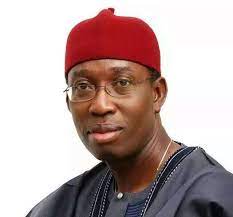 by afrikanwatchngr@gmail.com
By Daniel Njienue, News/Comments, June 22, 2021 ASABA-The opposition party in Delta State, All Progressive Congress has lashed Governor Ifeanyi Okowa, on his recent outburst on those the governor described as enemies of progress of Anioma Nation. APC in a statement released by the party through its Publicity Secretary (Caretaker)  Sylvester Imonina, Esq, wonder why... Read More

Game of Hacks – See How Good You Are

ASABA-The opposition party in Delta State, All Progressive Congress has lashed Governor Ifeanyi Okowa, on his recent outburst on those the governor described as enemies of progress of Anioma Nation. APC in a statement released by the party through its Publicity Secretary (Caretaker)  Sylvester Imonina, Esq, wonder why a sitting , who is supposed to play the role of  an elder statesman,  is now taking side with a section of the state, his own people. The statement read:

The All Progressives Congress (APC), Delta State and indeed Deltans are disturbed by the recent utterances, actions and inactions of the State Governor, Sen. Ifeanyi Okowa in the governance of the States. The persistent failure of the Governor to correct his mistakes when the opportunity beckons only suggest one thing; and that is the fact that what he says and does are clearly premeditated and intentional. Recently, the Governor who was supposed to be an embodiment of ethnic harmony and unity, tagged a group of people as “haters of Anioma” because of his political biasness and ethnic inclination. Rather than see himself as a Deltan before seeing himself as an  Owa-Alero man by virtue of the position he presently occupies, he  rather prefers to  always throw caution to the wind in all that he does, not minding how Deltans outside his home town feel.

He basically has no emotional intelligence and this has driven him to care less about Deltans who are not from his locality. He places more premium on ethnic bias to the detriment of the State and this is probably what drove him to hurriedly dissolve the State Executive Council several weeks ago, not minding the effect that it will have on the smooth running of government especially at this period when the state is facing a lot of challenges.  Infrastructurally, the Governor gives more attention to his home Town, Owa-Alero than even the State Capital, Asaba! Deltans, particularly in Ndokwa Nation now comfort themselves with the saying that “no matter how dark the night may be, there must be dawn”. What this means is that the deliberate and intentional underdevelopment of Ndokwa Nation under Sen. Okowa led Government shall last but for a while. On the 19th of June, 2021, there was an advertorial in Pointer Newspaper wherein the Ministry of Works, Asaba, called for contractors’ interest in the construction of eleven roads in the State. Out of the eleven roads advertised for, ten of them were to be constructed in Owa-Alero, the Governor’s home town in Delta North while only one is in Effurun in Delta Central, and none in Delta South!

What worries Delta APC and Deltans is that the oil producing communities, the “hen that lays the golden eggs” and indeed other parts of Delta State were never considered in the said Advertorial by government. Wherein lies equity and inclusiveness in governance? Is this not politics of clanishness taken too far! Unfortunately, the “hallelujah boys” of the Governor are giving excuses to the effect that someone in the past did something similar to what Govr. Okowa is doing today. We state without any air of equivocation that this excuse is not and cannot be tenable in our present Delta State. The past cannot be used as a justification to deprive other Deltans of what they are entitled to. Presently, there is a simmering discontentment and wind of disharmony, accentuated by the nepotistic disposition of the PDP led-Government in the State.

Delta APC therefore calls on the Governor to have a rethink. Delta State belongs to all and it is the desire of all Deltans to be partakers in the affairs and development of the State as against what is presently obtainable in the State. It is never too late to do the right thing.