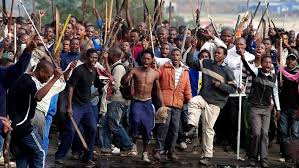 Xenophobic attacks: Most Nigerians in SA are enmeshed in wicked deeds:- Countrymen must restore our dignity- Commentary

by afrikanwatchngr@gmail.com
By Mark Columbus Orgu, September 9, 2019, news/comments COMMENTARY-After a careful look at the various arguments concerning the incessant attacks on Nigerians in South Africa few weeks ago, which also resulted to some youths attacking South African own businesses like ShopRite (s) and MTN, is what most social critics described as unfortunate as against the... Read More
Breaking: Ukrainian strikes killed ‘dozens’ in Russian-occupied Melitopol, exiled mayor says

COMMENTARY-After a careful look at the various arguments concerning the incessant attacks on Nigerians in South Africa few weeks ago, which also resulted to some youths attacking South African own businesses like ShopRite (s) and MTN, is what most social critics described as unfortunate as against the growth of African Continent.  Meanwhile, African leaders have condemned the act, reiterating the sacrifices made by our African heroes, to keep Africa as one family. The lates Nkrumah, Nyereye, and even Azikwe, were all promoter of oneness, and made us to see reasons to share love, rather than hate.

Like Martin Luther King Jr. tells us that, “along the way of life, someone must have sense enough and morality enough to cuff the chain of hate and evil. The greatest way to do that is through love. I believe firmly that love is a transforming power than can lift a whole community to new horizons of fair play, goodwill, and justice”. This is what those South African plotters would have done, and follow the rule of law to engage Nigerians, who they might have considered to be a threat to their rightful job opportunities as alleged. Another trending story was the alleged involvement of Nigerians in drug business, and the pollution of their land. But, the truth is that crimes are found everywhere, so therefore, the burden of prove cannot be upon Nigerians living in South Africa.

Now, South Africa’s Foreign Minister, Naledi Pandor, has accused most Nigerians living in the country of illegality, describing the xenophobic attacks as an embarrassment for her country.”Our government regrets all violence against foreign-owned stores or Africans from other countries who are resident in South Africa,” she was quoted as saying on national broadcaster SABC. She therefore ordered the closure of the country’s high commission in the Nigerian capital, Abuja, and its mission in Lagos, following threats made to the diplomatic staff. The question is that, should we now repay evil with evil or act like the Corinth, where Christianity name was coined from, or follow the teaching of Christ, who preached against retaliation, well, that is another discussion for another day.

Meanwhile in a short conversion I had with a friend, (name withheld), who is a Nigerian, and resident in South Africa for more than a decade, described most attacks against Nigerians in South Africa as sad, but has this to say “Indeed, this has been our concern; the majority of Nigerians in South Africa are engaged in nefarious activities ranging from drug-dealing, financial crime, human trafficking and using locals for prostitution. I must add that the concerns of South Africans are legitimate, unfortunately, they are addressing it in a barbaric manner.  In the wake of this attacks, our government needs to cajole Nigerians to conduct themselves according as responsible residents of this country” It is regrettable that innocent Nigerians are affected by the Barbarism of some uninformed South Africans, however, the blame must be equally shared as well as the solutions”

“Let me use this platform to discourage Nigerians at home from damaging the properties and businesses of South Africans; believe me, the root of this problem is the conduct of our countrymen. Let us utilize the energy in talking to ourselves; the whole idea of hitting it big overseas is a mirage; the only difference between these countries and ours is that they have a better government and social infrastructure. It is really sad to see fellow countryman destroying our identity as Nigerians just because of the pressure back home” he concluded. This was just a whatsapp chat i had with him last night.

The question before us are, when can we regain our pride of our founding fathers, where is our dignity, even with all the free gift of nature, that God has given to us as a country. Yes, we have bad leaders that lack vision and direction. Our young ones find solace outside their country, just because the few have encaged national wealth to themselves. It is time to rethink Nigeria, otherwise, more damaging situation will arise- if nothing is done to engage our young Nigerians productively.

Mark Orgu , is the editor, Afrikanwatch, Nigeria,  he is also a social critics and commentator, writes from Lagos. (mcnext8@gmail.com)