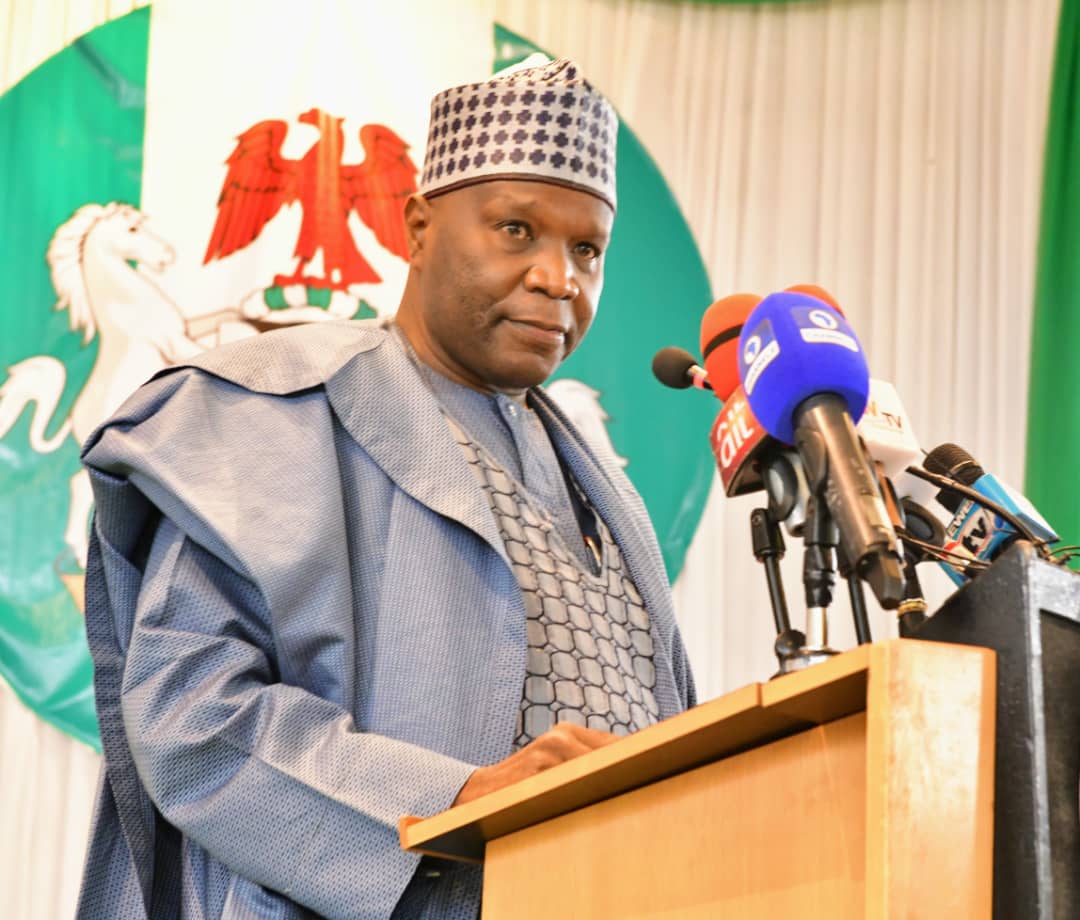 X-raying the two years of Governor Inuwa’s administration, what the future holds for Gombe State

by afrikanwatchngr@gmail.com
“With the tempo of hard work and massive support enjoyed presently by the Inuwa Yahaya administration it is quite clear that sooner than later, more national and International recognitions are on the way of the Governor and the Jewel in the Savannah” By Ismaila Uba Misilli, June 26, 2021, News/Comments After two years in the... Read More

Editorial: DSP, Omo-Agege and the bill that translated into the proposed Federal Polytechnic, Orogun

“With the tempo of hard work and massive support enjoyed presently by the Inuwa Yahaya administration it is quite clear that sooner than later, more national and International recognitions are on the way of the Governor and the Jewel in the Savannah”

After two years in the saddle, Governor Muhammadu Inuwa Yahaya has recorded many firsts in governance and has bagged many awards, including Man of the Year from four different Newspapers in different sectors. Under his watch, Gombe State however added yet another first recently when it was adjudged the best in Ease of Doing Business by the Presidential Enabling Business Environment Council (PEBEC). The Council, headed by the Vice President of the Federal Republic of Nigeria, Prof Yemi Osinbajo, is a status report podium on the current attractiveness of states’ business climates for small and medium scale enterprises (SMEs).

Since his assumption of office at a time the economy of the state, and indeed that of the country in general, was already struggling to stay afloat in the murky waters of economic doldrums, Governor Yahaya’s exceptional business acumen which accounted for his phenomenal success in his private businesses has been brought to bear in the governance of Gombe.

Although he inherited a humongous debt profile left behind by the immediate past administration in the State, Inuwa Yahaya was undaunted having overturned several challenging situations like that in the past and always making huge successes out of all. It was definitely a dire situation for Gombe State, considering its low-standing Internally Generated Revenue IGR status and its unfavourable position as second to the last State on the nation’s statutory allocation log.

But no sooner Governor Yahaya settled down to tackle these problems head on than the novel Coronavirus Pandemic set in, destroying literally global economies, particularly Nigeria’s ailing economy to which Gombe State is an integral part of. As it were elsewhere, this pandemic brought to a complete halt the attention of the Gombe State government on other sectors of the economy in order to channel all energy and resources towards containing the virus.

Today, the story is different as a great deal of the challenges associated with the novel Coronavirus Pandemic have since been addressed brilliantly by Governor Muhammadu Inuwa, bringing back to reckoning, the social, infrastructural and economic vision and mission his administration has for the State. To this end, the Governor has triggered a robust 10-year Development Plan otherwise known as Development Agenda for Gombe – DEVAGOM.

This plan is basically aimed at positioning the State as a beacon for socio-economic infrastructural and cultural development, while making Gombe State a destination haven for investors. To achieve these lofty initiatives contained in the plan, the APC administration in the State came up with an ambitious project known as the “Network 11-100” which targets the construction of at least one hundred kilometres of road in each of the eleven Local Government Areas of State because it is the conviction of the Governor that road network plays a pivotal role in opening up a society for economic growth and development.

Also, in its firm belief that health is wealth and a healthy nation is a wealthy nation, the Gombe State government wasted no time in embarking on the construction and revitalization of Primary Health Care Centres, PHCs across the 114 political wards of the State. This is in addition to the complete overhaul and upgrade of the State Specialist hospital Gombe. Today every ward in the State can boost of a functional PHC operating 24 hours with the compliment of solar system to generate energy at the facility and boreholes to supply water.

On the transport sector, the administration of Governor Muhammadu Inuwa Yahaya on coming into office approved the procurement of 50 Toyota Hummer buses to be used by the Gombe state transport service, known as Gombe Line. The immediate approval for the procurement of the buses came at the heat of public outcry on condition of the Gombe line buses. However, the State owned Transport Company is currently doing credibly well, providing services to commuters travelling to different parts of the country.

In the same vein, the Gombe State government, under the leadership of Governor Inuwa Yahaya, embarked on a sweeping and wide ranging reform to block financial leakages, ensure prudence in Government spending as well as breaking all forms of administrative bottlenecks in the system. From the establishment of the Gombe Geographic Information Systems ( GOGIS) in an effort to digitize, manage land matters effectively to the new tax regime in the state.

Perhaps, the above measures and other world class business models introduced by the ebullient and effervescent Governor Inuwa Yahaya made Gombe to outclass other states on the Ease of Doing Business medal table. It is not surprising at all to see Inuwa Yahaya giving tacit encouragement and support to small and medium scale industries. The State Government has reorganised the industrial cluster in BCGA by providing them access to financial services and building infrastructure such as road networks to ease the movement of goods and services in the area.

The political sagacity cum economic dexterity of Governor Muhammadu Inuwa Yahaya can be better appreciated in his conceptualisation of the Gombe Industrial Park in Dadinkowa Yalmatu Deba Local Government Area of the State. The Industrial Park is standing on a 1000 hectres of land with the compliment of 40-megawatt hydroelectricity in Dadinkowa Dam. The industrial Park is expected to revolutionise the agricultural sector which is the main occupation of the State.Furthermore, Inuwa Yahaya has been able to sustain a relative peace and tranquility uncommon in the North East of Nigeria. This relative peace is perhaps the most fundamental factor that placed the State at a vantage position to be ranked first in the country with the favourable conditions for doing business. All these efforts by the APC led Government in Gombe State aptly captured the parameters used by the Presidential Enabling Business Environment Council (PEBEC) and won the committee’s heart.

This subnational survey methodology framework was developed by the PEBEC-NEC Technical Working Group comprising representation from six states embodying the six geopolitical zones, the NEC (National Economic Council) Secretariat, Nigerian Governors Forum, the Nigerian Bureau of Statistics, the Nigerian Investment Promotion Commission, the Nigerian Export Promotion Council, the Nigerian Summit Group and other private sector representatives. PEBEC has developed a homegrown indicators used in the survey which are; infrastructure and security, transparency and access to information, regulatory environment and skills and workforce readiness. Each state was rated on a ten-point scale across the indicators, which provided the basis for calculating the overall performance of the state. The field survey was conducted by KPMG Professional Services between November 2020 and January, 2021.

The survey captured the reforms baseline enabling each state’s Ease of Doing Business Council to craft their own reform agenda and implementation roadmap based on empirical data and feedback from a cross section of 998 SMEs across the 36 states and the FCT. A breakdown of the result showed that on security, Gombe scored 5.86 in Electricity, 5.86 in Transportation, Primary Healthcare 7.50 and Security, 7.99, with an average score of 6.80. In Transparency and Access to Information, the state scored 9.35 in Investment Promotion and 8.69 in State Information Structures, with an average score of 9.02. In regulatory environment, it scored 5.75 in paying taxes, 8.21 in Starting a Business, 6.44 in Enforcing Contracts and 7.64 in Land, Property Acquisition and Development. Its average was 7.01.In Skill and Labour, Gombe scored 7.94 in Technical and Professional Skills.

The cumulative average of the state was 7.69, shooting it to the top of the list of states with the best enabling environment for doing business in the country. Like Dr. Ibrahim Hameed noted in a recent article, that the ease of doing business survey was an indication of the suitability and attractiveness of a state to both local and international investors, implying that the more the state improves its business regulatory environment the more it attracts investment and achieve sustainable growth, creates jobs and reduces poverty which results in the rise in standard of living of the state populous which is a key in delivering the dividend of democracy and good governance.

Governor Muhammadu Inuwa Yahaya had while reacting to the development, attributed the attainment of the feat to a clear demonstration of his administration’s commitment to good governance which has culminated in comprehensive reforms in land administration, financial management, revenue administration and the massive infrastructural development that are critical to doing business.

“Noteworthy is the drastic reduction in transaction time for processing land title and ease of payment of taxes as captured in the harmonised Gombe State revenue law. In addition, the clear and purposeful drive in vocational and technical education, as well as support to SMEs, have ensured the upgrading of the skills of the youthful population of Gombe State”, he said.

The Governor assured citizens of Gombe of his determination to sustain the tempo, while acknowledging the hard work by the public service in making these achievements happen. He expressed belief that the successes recorded so far are also part of the dividend of his administration’s comprehensive reforms in the civil service.

With the tempo of hard work and massive support enjoyed presently by the Inuwa Yahaya administration it is quite clear that sooner than later, more national and International recognitions are on the way of the Governor and the Jewel in the Savannah.

Murder of a Super TV CEO by a Unilag Side Chic, Chidinma: Suicidal society and the loss of parental values –Mark. C. Orgu
Previous Post
DSP, Omo-Agege And The Grace Beyond Measure: What Posterity Holds-COMMENTARY