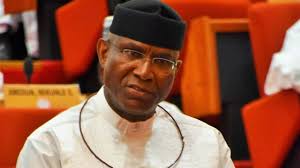 We’ll be vigilant and watchful-UPU, says, no one can be allowed to callously rubbish DSP, Omo-Agege

by afrikanwatchngr@gmail.com
January 18, 2020, News/Comments. DELTA- The recent dubious allegation levelled against the Nigerian Deputy President of the Senate, Senator Ovie Omo-Agege by a group of young Nigerians led by one Solomon Adodo, who accused the Senator of forgery and being convicted in United State , US, has been totally condemned in a strong term by... Read More
COMMENTARY: Time for referendum or create a new constitution—Nigerian-UK base- Samuel Taiwo Brown

DELTA- The recent dubious allegation levelled against the Nigerian Deputy President of the Senate, Senator Ovie Omo-Agege by a group of young Nigerians led by one Solomon Adodo, who accused the Senator of forgery and being convicted in United State , US, has been totally condemned in a strong term by the highest Urhobo’s organization, Urhobo Progressive Union, UPU. They wonder why jobless and hired young youth could waste their time and energy for fruitless exercise that will end in total futility. The Union therefore warn that, Urhobo nation would not hesitate to mobilise its members across Nigeria for a peaceful protest, if those political jobbers fail to stop their useless agitation of resignation on Omo-Agege.

Meanwhile, in a press release on Thursday 16th January by UPU, signed by its President-General, Olorogun Moses Taiga described the sad scenario as a reprehensible grand scheme to further rape and deprive the country’s fifth largest Nationality of her rightful place in the National Scheme.: The statement, “The allegation against Senator Omo-Agege, who represents Delta Central Senatorial District of Delta State was not only most obnoxious and odious but repugnant and devilishly wicked”.

The Urhobo umbrella body stated that it had done its checks and discovered that the allegation of the Deputy President of the Senate being convicted by a Californian court in the United States of America was false and, a calculated attempt by enemies of the Urhobo Nation to have their son vacate his seat as DSP.

The Union stressed that those calling for Senator Omo-Agege’s resignation are enemies of the “Live and Let Live” basics of democracy, which include fair hearing, due process, based on irrefutable facts.

“For the avoidance of doubts, the UPU has never supported criminality or immorality in the polity. Therefore, ordinarily, if there were any iota of substance in their call for his resignation, the Urhobo Nation would have been boxed into a tight corner, but would still have stood firmly and stoutly for moral rectitude. Rather, the call, by the group, lacks the slightest whiff of believable scent”, the statement read.

“The UPU is well briefed that this odious matter has long been disposed of in the earliest days of Senator Omo-Agege’s entry onto the Political arena. Our Senator has been going to the United States of America, before he became a Senator, and even recently, as his family partly resides there. Even, as we speak, Senator Ovie Omo-Agege’s Californian Law License is very much active”.

“On the issue of the forcible seizure of the Mace of the Senate of the Federal Republic of Nigeria, Senator Omo-Agege was exonerated of any complicity by an Abuja High Court sitting in Bwari”, the body said.

“Instead of this undemocratic resort to mudslinging and nuisance to the public peace”, the Urhobo socio cultural group in its statement, called on all those who feel Omo-Agege has a case to answer, to go to court.

It further urged the Civil Society Coalition, threatening to mobilize a noisome coterie of those they would be misinforming against our Senator, to have a rethink.

“The role and position of the Urhobo Nation in the Nigerian Project, not only in size, but even more critically in her economic wellbeing, dictates that her rights be fully recognized and upheld, such that no frivolous group should lightly contemplate depriving her of her rightful place in such a critical chamber of Policy-making, as the Senate”, the UPU stated.

“The Urhobos are constitutionally and legally, as well rich enough in numbers to also, mobilize her own people to counter any form assault on her rights”, it declared.

The Statement also put the entire Urhobo Nation on the alert, reminding all that this is the all-time highest position any of their nationality has ever held.

“It behoves all Urhobo persons the need to be vigilant and watch one of theirs being casually and callously rubbished”, UPU declared.

The statement from the UPU also urged all Urhobo leaders in the ruling All Progressives Congress, APC, “to sheathe every sword, put their house in order and end internal wrangling that embolden others to feel free to hatch such schemes to put down such a great nationality as the Urhobo Nation”.

UYC and OPU place red alert on those blackmailing DSP, Omo-Agege, it is a character assassination
Previous Post
Supreme Court Coup on Imo: Nothing can change until this generation dies off-Commentary