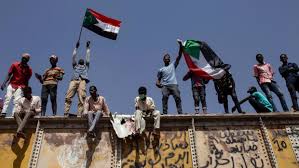 US, UK, to hold Sudanese military over killings, and attacks on protesters

by afrikanwatchngr@gmail.com
-June 4, 20119, news/comments KHARTOUM, Sudan –The U.S. Embassy in Sudan is calling on Sudanese security forces to stop their “attacks against protesters and other civilians.” AP had reported earlier that the embassy sounded a note of warming   via Facebook that apparent attempts by Sudanese troops to move against a months-long protest camp in the... Read More

Participate actively in the ongoing amendment of the Constitution rather than seek for a new one-DSP, Omo-Agege

KHARTOUM, Sudan –The U.S. Embassy in Sudan is calling on Sudanese security forces to stop their “attacks against protesters and other civilians.”

AP had reported earlier that the embassy sounded a note of warming   via Facebook that apparent attempts by Sudanese troops to move against a months-long protest camp in the capital are “wrong,” and that it holds the country’s Transitional Military Council responsible for the attacks.

Meanwhile, The British ambassador in Sudan, Ifran Siddiq, says he is “extremely concerned by the heavy gunfire” he’d heard from his official home in Khartoum, as well as “reports that Sudanese security forces are attacking the protest sit-in site, resulting in casualties.” He further noted in his twitter “No excuse for any such attack,”

However, Sudan’s ruling military council  had also affirms that  there have been clashes between troops and protesters in a sit-in area in the capital, Khartoum.

The spokesman for the council, Shams al-Deen al-Kabashi,, stressed in televised remarks that the military was targeting what it considers a problematic area near the sit-in, nicknamed “Colombia.” a number of people from that area then moved to the main protest site, and that the clashes had been between security forces and those people, he added.

He did not make clear if the military’s goal was to break up the entire sit-in camp, but said forces are moving to open blocked roads across the capital. In the same “Colombia” area, three people, including a woman, were killed by security forces in recent days.

Sudanese protest leaders say at least five people were killed as security forces moved against a protest sit-in camp in the capital, besieging the site and setting fire to tents.

The Sudan Doctors’ Committee said Monday that an unspecified but high number had been wounded. The group said medical personnel and injured people were trapped in clinics in the area, and demanded that they be allowed to leave.

Videos circulating online appeared to show protesters standing at low brick barricades in the street, then being driven back by walls of blue-clad security forces carrying sticks. Other videos showed protesters running through streets lined with sit-in tents, heads down, as the sound of gunfire filled the air.  Explosions and heavy machine gun fire are being heard across the Sudanese capital of Khartoum and troops are blocking roads leading to a sit-in camp of protesters who have demanded transition to civilian rule.

An Associated Press journalist also saw smoke rising from the site in Khartoum as the raid went on early Monday morning. The sit-in has lasted weeks as civilians and military officials argue over the makeup of a transitional government. The military overthrew longtime ruler Omar al-Bashir in April after mass protests against his 30-year rule. Protesters insist no elections should be held before three years so that civilian leaders can dissolve all social and political networks of al-Bashir’s old party and purge all state institutions.