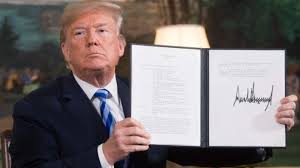 US is always ready for war-Trump, imposes sanction on Iran over terror act

by afrikanwatchngr@gmail.com
-September 21, 2019, news/comments United States President, Donald Trump said on Friday that there’s ‘plenty of time’ for him to ‘go in’ to Iran if the country continues to ignore his warnings and illicitly finance terror operations. After putting new sanctions on Tehran, which he described as the stiffest penalties “ever put on a country”... Read More

United States President, Donald Trump said on Friday that there’s ‘plenty of time’ for him to ‘go in’ to Iran if the country continues to ignore his warnings and illicitly finance terror operations.

After putting new sanctions on Tehran, which he described as the stiffest penalties “ever put on a country” the U.S. president said it “would be very easy, easiest thing’ for him to give Iran a taste of American military might.

“We are by far the strongest military in the world. Going into Iran would be a very easy decision, as I said before, would be very easy, easiest thing,” he noted at a White House news conference.

Continuing, he stressed “And most people thought I would go in, in two seconds. But plenty of time, plenty of time.” He added, “I think I’m showing great restraint. A lot of people respect it. Some people don’t. Some people say, we should go in immediately. And other people are so thrilled with what I am doing.”

MailOnline, had earlier reported that, Treasury had said that it was also making it a crime to do business with an Iranian-based company, Etemad Tejarat Pars, it accused of concealing financial transfers that funded military purchases.

The entities are charged with providing funds to the Islamic Revolutionary Guard Corps, an Iranian military force that Trump designated a terror organization; Qods Force, a unit within the IRGC; and Hizballah, a Lebanon-based terror organization that’s propped up financially by Tehran.

“This is very big. We’ve now cut off all source of funds to Iran,” announced Treasury Secretary Steve Mnuchin in the Oval Office. As Trump entertained the Australian prime minister, who’s on an official state visit in Washington this week, he said the only way for Iranian President Hassan Rouhani’s regime to crawl out from under the administration’s sanctions is to end state-sponsored terror, the MailOnline noted in its report.

“These are the highest sanctions ever imposed on a country. We’ve never done it to this level. And it’s too bad what’s happening with Iran. It’s going to hell, doing poorly. Houthi rebels say they’ll end drone, missile attacks on Saudi Arabia

“They are practically broke. They are broke,” he said. “They could solve the problem very easily. All they have to do is stop with the terror.” He warned that the alternative is far less desirable, hinting at the possibility of a military strike or deployment. Trump said the United State is ‘always prepared’ for war and he’s spent $1.5 trillion dollars making it so.

That’s the easiest thing I could do. It’s so easy. “And for all of those that say, “Oh, they should do it. It shows weakness. It shows…” Actually, in my opinion, it shows strength. Because the easiest thing I could do, “Okay, go ahead. Knock out 15 different major things in Iran.” I could do that and — all set to go. It’s all set to go. But I’m not looking to do that if I can.’ Trump said then that in his opinion, ‘it shows strength’ to keep his finger off the trigger.

‘I think it shows far more strength to do it the way we’re doing it. And again, whether it’s next week or two weeks or three weeks doesn’t make any difference. “Whether it’s now or in three weeks doesn’t make any difference,’ he contended. ‘But I think the strong person’s approach and the thing that does show strength would be showing a little bit of restraint. Much easier to do it the other way. It’s much easier.’ He added, ‘And Iran knows if they misbehave, they’re on borrowed time.’ ‘But think of it: one and a half-trillion dollars. And we have the greatest in the world. But I think restraint is a good thing. I think it’s a good thing,’ the president said.