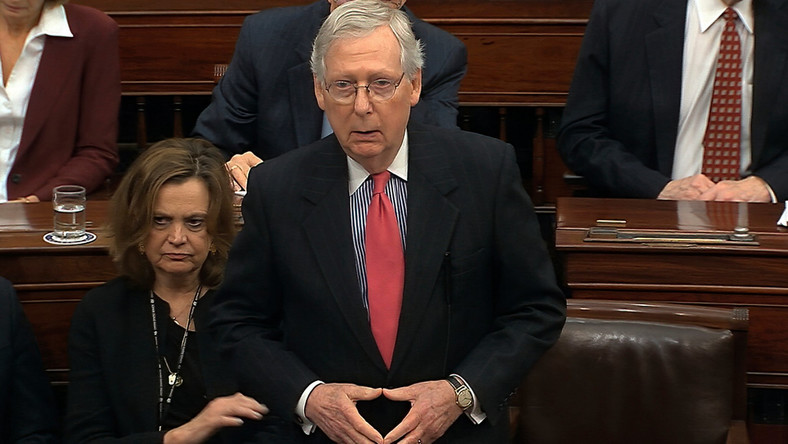 by afrikanwatchngr@gmail.com
-February 1, 2020,news/comments. US President Donald Trump is set to be acquitted in his impeachment trial after senators voted against calling witnesses or admitting new evidence. Democrats hoped four swing Republicans would vote for witnesses, which would have extended the trial without in all likelihood changing its outcome. In the end, only two of the... Read More

US President Donald Trump is set to be acquitted in his impeachment trial after senators voted against calling witnesses or admitting new evidence. Democrats hoped four swing Republicans would vote for witnesses, which would have extended the trial without in all likelihood changing its outcome. In the end, only two of the four Republicans voted with Democrats.

The trial now moves forward to a vote on whether to acquit President Trump, which he is all but certain to win. Senior members of President Trump’s Republican Party pushed from the outset for a speedy trial with no witnesses or new evidence. Above all, they wanted to avoid senators hearing from former National Security Adviser John Bolton.

According to reporting by the New York Times, Mr Bolton writes in his forthcoming book that the president directly instructed him to withhold military aid from Ukraine in exchange for dirt on a Democratic political rival, Joe Bide. Testimony from Mr Bolton about his involvement in the Ukraine affair threatened to significantly undermine the case made by the president’s lawyers during his trial.

Trump was impeached on two charges – abuse of power and obstruction of Congress. The first charge stemmed from an allegation that he pressured Ukraine to damage Mr Biden for his own political benefit. The second from an allegation that he purposefully obstructed the Congressional impeachment investigation. The final vote on whether or not to acquit Mr Trump will be held on 5 February.The Senate will vote on Wednesday 5 February on whether to convict or acquit the president on the two articles of impeachment brought against him.

Democratic Senate leader Chuck Schumer said there would be four votes on Friday night on Democratic amendments, followed by closing arguments on Monday, speeches from senators from Monday to Wednesday, and a final vote on Wednesday – the day after President Trump’s State of the Union address.

A two-thirds majority in the chamber of 67 votes is required to remove him from office. The Republicans control the Senate with a 53-47 majority over Democrats, and no Republican senator has signalled that they plan to vote for Mr Trump’s removal.

Eyes will instead fall on several Democrats in Republican-leaning states who have indicated they may vote to acquit. Any Democratic defections would be a symbolic victory for the president that he will likely use to his advantage on the campaign trail in the coming months.Enable it in your browser or download Flash

The battle over witnesses intensified a week ago after reports emerged that Mr Bolton might have highly damaging testimony about the president’s involvement an alleged quid pro quo with Ukraine.

Mr Bolton’s forthcoming book reportedly alleges that the president personally directed the scheme to get dirt from Ukraine on Mr Biden, a former US vice president. The revelations threatened to undo Republican arguments that no impeachment witness had first-hand testimony of the president’s involvement.

But the slim chance of Mr Bolton being called to give testimony to the Senate slipped away from Democrats on Friday, after two of the four Republican senators they had hoped would defect confirmed that they would not.

Senator Lamar Alexander of Tennessee said in a statement late on Thursday that, while the Democrats had clearly demonstrated the president’s actions were “inappropriate”, they had not proved to be impeachable offenses.

“The question then is not whether the president did it, but whether the United States Senate or the American people should decide what to do about what he did,” he said.  “I believe that the constitution provides that the people should make that decision in the presidential election that begins in Iowa on Monday.”  Senator Lisa Murkowski of Alaska, another moderate, said in a statement on Friday afternoon: “The House chose to send articles of impeachment that are rushed and flawed. I carefully considered the need for additional witnesses and documents, to cure the shortcomings of its process, but ultimately decided that I will vote against considering motions to subpoena.”

Republican senators Susan Collins of Maine and Mitt Romney of Utah decided to vote to call witnesses, but they were alone among the 53-strong Republican Senate caucus. Democratic House impeachment managers said throughout the process that a trial without witnesses amounted to a sham trial. They were joined on Friday by President Trump’s former White House chief of staff, John Kelly, who told a New Jersey publication that Mr Trump had been subjected to only “half a trial”.

Barring an unforeseen and unexpected blockbuster development, a largely party-line vote will acquit him of the two charges brought by the House of Representatives, which itself approved those articles of impeachment on a nearly party-line vote.

Both sides will soon be left to sift through the political rubble just nine months before a national election that has the entire House, more than a third of the Senate and the presidency itself on the ballot. According to polls, the nation’s political disposition is much as it was before the impeachment process began. The US is sharply divided along partisan lines. The president’s approval ratings hover in the low to mid-40s, roughly where they’ve been the entirety of his term in office. His re-election chances are dicey but far from slim.

The decision not to seek witnesses – which polls show Americans overwhelming wanted – may be forgotten before long. Polls don’t tell the whole story, however, and there are other signs that the impeachment proceedings have made an impact. Three of the four Democratic senators running for president tweeted in the moments after the witnesses vote went against the party.

“Senate Republicans just failed the American people & broke their oath to the United States Constitution,” wrote Massachusetts senator Elizabeth Warren. Vermont senator Bernie Sanders, an independent who caucuses with Democrats, wrote: “I’ve never heard of a trial where you don’t have witnesses. This is a sad day in American history.”

Senator Amy Klobuchar of Minnesota wrote: “If you don’t have witnesses, you do not have a fair trial. The truth will come out.”