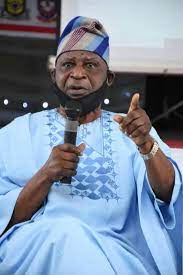 by afrikanwatchngr@gmail.com
By Daniel Njienue, Interview/News, June 6, 2021 OGUN-Speaking with Afrikanwatch Network on a telephone interview last week Thursday is an elder statesman, who is also a chieftain of Afenifere, a Pan Yoruba Social Organisation, Sen. Femi Okurounmu, CON, who reiterated why he would prefer a break up in the Nigeria state rather than remain under... Read More

OGUN-Speaking with Afrikanwatch Network on a telephone interview last week Thursday is an elder statesman, who is also a chieftain of Afenifere, a Pan Yoruba Social Organisation, Sen. Femi Okurounmu, CON, who reiterated why he would prefer a break up in the Nigeria state rather than remain under what he described as “second colonialism”.  Stressing that, Nigeria is at the edge of total collapse and that, the current administration, led by President Muhammadu Buhari has also created the avenue for agitations for secession.  “Circumstances push people into  whatever they do, at least it’s the circumstances in Nigeria today that is pushing people for a break up of Nigeria” The Senator went further to say that, he would prefer a break up of Nigeria peacefully rather than be a slave to any Fulani leadership. “I will prefer a break up rather than be a slave”.  He noted that, secession over the world does not require hundred percent support but only determined mines who feel marginalized triumph gloriously.

Asked that, most key Yoruba leaders in government today do not support Secession, and the agitation for Oduduwa republic, Okurounmu said:  “Well, you are the one calling them key people. For the fact they are in power doesn’t make them key people. Those are the slave Masters, they would not like to lose any of their slaves. Yes, they are slaves to the Fulani’s, that’s my personal opinion”

In a similar vein, Sen. Okurounmu agreed on the view of Prof. Itse Sagay who said that the country should go back to the 1963 Constitution, describing it as the solution to Nigerian problem but the Senator said that, he is not a fan of the Professor, who is working for President Buhari “I don’t support Prof. Sagay ever since he started working with President Buhari but, on that particular one of going back to 1963 Constitution, I agree with him because that Constitution will serve us better. “Let us return back to the 1963 constitution, it will solve the problems” he stressed.

Asked again, that the structure and population of the country as at that time was not the same with the 21st century antics. The Afenifere Chieftain said “It’ has nothing to do with population, it has nothing to do with 3 regions or 4 regions, my personal view is that we should go back to Gen. Yakubu Gowon retd 12 states.  He created 12 states because he wanted to satisfy the minorities. The point is that, if we apply the 1963 constitution, instead of having 4 regions, we should have 12 states as created by Gowon. But people always have their selfish interest, which has made people not to go for what is good for the people of Nigeria and what is good for Nigerian progress”

88 Senators, 288 reps members are needed for a new Constitution-DSP, Omo-Agege, assure Nigerians of inclusive amendment
Previous Post
Breaking: Emerhor to emerge as new NDDC Board Chairman and others