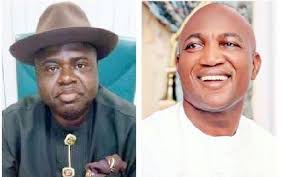 by afrikanwatchngr@gmail.com
-February 27, 2020, news/comments. ABUJA-The Supreme Court, on Wednesday, declined to reverse its judgment that sacked David Lyon and Degi-Eremieoyo as governor and deputy-governor elect of Bayelsa state. The apex court, in a unanimous decision by a seven-man panel of Justices headed by Justice Sylvester Ngwuta, dismissed the two different applications that sought to set... Read More

EndSARS: You’re on your own -Mr Macaroni, Falz tells Sanwo-Olu, says, ‘we can’t walk with you on peace without justice’

ABUJA-The Supreme Court, on Wednesday, declined to reverse its judgment that sacked David Lyon and Degi-Eremieoyo as governor and deputy-governor elect of Bayelsa state. The apex court, in a unanimous decision by a seven-man panel of Justices headed by Justice Sylvester Ngwuta, dismissed the two different applications that sought to set aside the judgement it delivered against Lyon and his deputy on February 13.

In the lead verdict that was delivered by Justice Amina Augie, the apex court, described fresh applications that were filed by Lyon, his deputy and the All Progressive Congress, APC, as “highly vexatious, frivolous and gross abuse of the judicial process”. It held that the applications were aimed at “desecrating the sanctity of the court”, stressing that it was an invitation for the Supreme Court to sit on appeal over its final judgement.

According to Justice Augie, “It is clear that the two applications lack merit and constituted an abuse of court process”. She said there was no doubt that the applications were aimed to review a final judgement of the apex court, in violation of Order 8 Rule 2 of the Supreme Court Act. Justice Augie stressed that the use of the mandatory word “Shall” in the said Order 8, was an indication that such application for review of final judgement of the court was bound to fail. “The court is nor authorised and lacks the jurisdiction to review its judgement”, she held, adding that the Applicants failed to either show that there was any clerical error, accidental slip or commission, or that any aspect of the judgement that needed to be varied.

She said the sole aim of the Applicants was to set-aside “operative and substantive parts of the judgement”, despite the provision of section 235 of the 1999 constitution, as amended, that gave the Supreme Court the final say in every appeal. “Once this court has finally determined an issue, it is functus-officio. It is final forever, only legislation can alter it. It is final for all ages. No force on earth can get this court to shift its position on Bayelsa matter”,Justice Augie held.

She said even if the apex court was minded to review its judgement, there was no guarantee that the PDP and its candidates would not also file their own application for a review.

Supreme Court declines to reverse judgement on Bayelsa guber “There must be an end to litigation to ensure certainty in the law”, she added, saying “there must be finality to decision of the court”. Justice Augie held that if the applications were not dismissed, “every disaffected litigant will bring appeals ad-infinitum. This must not be allowed”. She expressed her disappointment that counsel to the Applicants, being senior members of the legal profession, encouraged their clients to desecrate the sanctity of the apex court. Consequently, Justice Augue awarded a cost of N10million each against Lyon, Degi-Eremieoyo and APC, to be paid in favour of governor Douye Diri, his deputy, Lawrence Ewhruojakpo and the Peoples Democratic Party, PDP.

She ordered that the cost should be personally paid by lawyers to all the Applicants. Earlier, Lyon and his deputy had through their lawyer, Chief Afe Babalola, SAN, maintained that the Supreme Court had inherent powers to set aside its own judgement when it constituted a nullity. Babalola, SAN, contended that the judgement was a nullity as it amounted to a breach of the right of fair hearing of his clients.

“The procedure adopted by this court on February 13 was such that deprived the judgement of the character of a legitimate adjudication”, he argued, saying the previous panel that was headed by Justice Mary Odili failed to consider the issue of cause of action before it disqualified both Lyon and Degi-Eremieoyo”, he argued. Likewise, the APC, through its lawyer, Chief Wole Olanipekun, SAN, also argued a similar application he filed on February 23 to challenge the judgement, he said was entered in error.

Counsel to the PDP, Chief Tayo Oyetibo, SAN, however, described the two applications as “undisguised invitation for the Supreme Court to abuse of the 1999 Constitution, especially section 235″. He said: ” This court is the final court of the land, but these applicants are trying to constitute this court to an appellate court over the February 23 judgment. It is an invitation for this court to sit in appeal over its own final judgement.

The applications deserve to be summarily dismissed. “Once this court has given full-blown hearing to an appeal and an order made, that order is final and final forever. “It will be scandalous if this application is granted. Under section 22 of the Supreme Court Act, this court has wide powers to make orders such as directing INEC to withdraw the Certificate of Return it earlier issued”.

He maintained that the order the Supreme Court made in its February 13 judgment was not out of place. “Grant of these applications will engender juridical instability in the country. Your lordships will find that once this application is granted, over 1000 applications will flood this court within the next one month. What reason will this court give as not to accede to their applications?”, Oyetibo queried.

Similarly, counsel to governor Diri, Yunuz Uztaz, SAN, and that of his deputy, Chief Chris Uche, SAN, prayed the apex court to dismiss the applications for constituting a gross abuse of court process. Arguing his preliminary objection, Uche, SAN, maintained that the Supreme Court had become functus-officio in the matter since it has already handed down its final judgement. He argued that granting the request would “open floodgate for the bastardization of judgements of the Supreme Court”. “We urge your lordships to decline this dangerous invitation to violate the constitution. It will erode the dignity of the Supreme Court as the final court of the land. “This is why we pray your lordships to dismiss the applications with substantial cost to prevent further abuse of processes of this court”, Uche submitted. On its part, the Independent National Electoral Commission, INEC, through its lawyer, Mr. Taminu Inuwa, SAN, said it would abide by the decision the court.