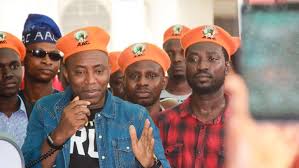 by afrikanwatchngr@gmail.com
December 6, 2019, news/editorial. LAGOS-While many are jubilating over the release of the publisher of Sahara reporters, Mr. Omoyele Sowore, others have narrowed it down, by saying, “democracy at work” This was parts of the report from the Voice of America who also reported that supporters of Nigerian activist and reporter Omoyele Sowore  has been... Read More

LAGOS-While many are jubilating over the release of the publisher of Sahara reporters, Mr. Omoyele Sowore, others have narrowed it down, by saying, “democracy at work” This was parts of the report from the Voice of America who also reported that supporters of Nigerian activist and reporter Omoyele Sowore  has been freed from state custody following a Thursday ( yesterday court ruling demanding his release.

The report reads: “A Nigerian court on Thursday ruled that state security officials have 24 hours to free the journalist and former presidential candidate, along with at least one of his two co-defendants, from what it called unlawful detention.

Word of Sowore’s release first appeared on social media, followed by a report from Sahara Reporters, the New York-headquartered news outlet that Sowore founded in 2006.

Sowore, who campaigned against President Muhammadu Buhari as a minor candidate in February, has been jailed since taking to social media in August to urge protests against Buhari’s second presidential term under the banner “#RevolutionNow.”

Before his arrest, Sowore regularly reported on official graft in Nigeria. His supporters have since called for nationwide protests against misrule in Nigeria, describing charges against the men as a politically motivated effort to stifle dissent in the oil-rich West African nation.

“The DSS cannot constitute itself as a parallel court of law,” Ojukwu said. “So it must release the defendants within 24 hours.”

“Upon meeting the bail conditions, Justice Ojukwu directed the [DSS] to release the defendants from detention,” said Falana last month in a prepared statement. But, he said, in contempt of the orders of Justice Ojukwu, the State Security Service has refused to release them. Last month, Sowore’s supporters accused state police of opening fire on unarmed people staging a peaceful protest calling for the release of all three defendants. Although the security agency denied the allegations, footage that surfaced online tell another story”

But it was like end of road for a former Governor of Abia State, now a Senator, representing Abia north,  Orji Uzor Kalu, when Justice Mohammed Idris delivered judgment against him, in a case of fraud, and therefore, declared the former Governor guilty of the charges brought against him, and ordered that Kalu should spent 12 years in jail. So far, the judgment has been lauded by many who sees it as a good omen against corruption, others were of the view that, the former governor is not on a good record of President Muhammadu Buhari. But whatever the case may be, justice at last- that public servants who think that they can misuse public fund or steal public fund and go free, is no more.

However, it could be noted that Mr Kalu was tried alongside his company, Slok Nigeria Limited, and Udeh Udeogu, who was Director of Finance and Accounts at the Abia State Government House during the former governor’s administration. In an amended 39 counts charge, they were accused by the Economic and Financial Crimes Commission of conspiring and diverting over N7 billion from the coffers of the state, the defenders out rightly denied.

Premium Times had earlier reported:  “The EFCC alleged that Mr Kalu, who was Abia State Governor between 1999 and 2007, “did procure Slok Nigeria Limited – a company solely owned by you and members of your family – to retain in its account, domiciled with the then Inland Bank Plc, Apapa branch, Lagos, an aggregate sum of N7,197,871,208.7 on your behalf.”

The prosecution claimed that the N7.1 billion “formed part of the funds illegally derived from the treasury of the Abia State Government and which was converted into several bank drafts before they were paid into the said company’s account.”

It was on this basis that the EFCC prosecuting counsel, Rotimi Jacobs, stressed   KALU violated Section 17(c) of the Money Laundering (Prohibition) Act, 2004, and was answerable to punishment under Section 16 of the same Act.  Premium Times also reported that apart from the N7.1bn, which he was accused of laundering, the ex-governor and the other defendants were also accused of receiving a total of N460 million allegedly stolen from the Abia State Government treasury between July and December 2002. The prosecutor said they breached Section 427 of the Criminal Code Act, Cap 77, Laws of the Federation of Nigeria, 1990. The defendants had pleaded not guilty to all counts. During the trial, the prosecution called 19 witnesses while the defendants testified on behalf of themselves.

The sentences will run concurrently meaning he would be in jail for 10 years. Justice Idris further held that Mr Kalu’s company, Slok Nigeria Limited, the third defendant, be wounded up and all assets forfeited to the federal government.  Kalu would now jail his colleague, Joshua Dariye, a former Governor of Plateau State in Kirikiri or Ikoyi Prison. It could recalled that the a Federal High Court, Gudu, Abuja, on Tuesday 12th June, 2018 sentenced Dariye to 14 years’ imprisonment on the charges of criminal breach of trust and misappropriation of funds (1.6 billion naira) while he was a Governor .

Voice of America and Premium times