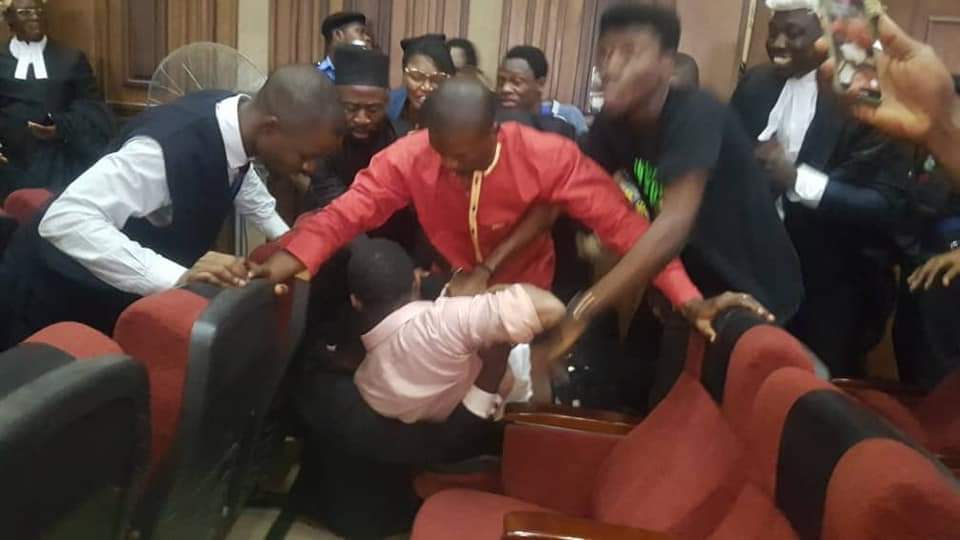 by afrikanwatchngr@gmail.com
By Angel James, December 7, 2017, news/comments LAGOS-With the re-arrest of Mr. Omoleye Sowore yesterday at the federal high court in Abuja after his bail condition, many political scientists and international bodies have condemned in a strong term of Mr. Sowore’s second arrest, while some described the situation as an ambush and desecration of the... Read More
Editorial: Racism and Slavery: The 1995 Nigger Hunting license, issues and prospects

LAGOS-With the re-arrest of Mr. Omoleye Sowore yesterday at the federal high court in Abuja after his bail condition, many political scientists and international bodies have condemned in a strong term of Mr. Sowore’s second arrest, while some described the situation as an ambush and desecration of the legal Institution, of which , a bad precedent has been laid. Among these critics, include, a former vice president and People Democratic Party (PDP), presidential candidate in the last election, Alhaji Atiku Abubakar, who called for the sanction of those DSS operates who have acted in unprofessional manner and engaged in what he called treat to democracy and rule of law, his words:  “Without the rule of law, there can be no rule at all. Power in Nigeria still flows from the people, not from the barrel of a gun. I call on all men and women of goodwill not to keep quiet or sit on the fence at times like this. To keep Nigeria democracy is the paramount duty of all concerned stakeholders. Please speak up against this tyranny and side with the Nigerian people”

For, the Socio-Economic Rights and Accountability Project (SERAP), they join in the condemnation. SERAP “Strongly condemned the violent re-arrest of Omoyele Sowore and his co-defendant, Olawale Bakare by officials of the State Security Service (SSS), and the apparent harassment and intimidation of Justice Ijeoma Ojukwu.”, SERAP deputy director Kolawole Oluwadare  further noted: “The appalling invasion of the courtroom and the ill-treatment of Sowore and Bakare is a blatant attack on the rule of law and the sanctity and integrity of our justice system. An independent judiciary, free from intimidation and harassment is a basic precondition to a functioning democracy under the rule of law.”

Also joining in lending their voice is the Human Rights Writers Association of Nigeria (HURIWA), who described the SSS action as a reminder of the dark era of military rule in the country.  “We urge Nigerians to speak out and defend democracy before it is too late” HURIWA however called on the world leaders to save democracy from the imminent death in Nigeria.

Meanwhile, the Nobel Laureate, Prof. Wole Soyinka has likened the action of the DSS on Friday to a pack of wild dogs attacking their prey. Hear him, “I apologize for underestimating the DSS capacity for the unthinkable. I reiterate the nation’s concern, indeed alarm, about the escalating degradation of the judiciary through multiple means, of which disobedience of court orders is fast becoming the norm”

In another development, a retired Assistant Director and Security Expert, Mr. Dennis Amachree, MON, has seen no wrong with the DSS action over the re-arrest of Mr. Sowore. In a question sent to him on the issues and how democracy can grow, Mr. Amachree said: Growing democracy? Even in the largest democratic country, India, charges are reviewed, some dropped and new ones added as a case proceeds. About what happened in the court yesterday, Sowore and his lawyers won the well planned propaganda? Like you said it was a movie, well scripted by Sowore and his supporters. They said the DSS stormed the court with guns and scared the Judge to run away!!?? I watched that video up to ten times, I did not see any gun in that courtroom. Maybe those who saw guns can help us point them out here. The DSS was there to re-arrest Sowore for violating his previous bail condition at the Hilton Hotel after his release and for the failure of his lawyer to apply for a fresh bail”

“And they were outside the courtroom waiting while Sowore and his supporters were dramatizing their script in the courtroom. We keep forgetting who actually is sabotaging our democracy here. An election was held. A winner emerged. Whether by hook or crook. Other losers went to court. But Sowore rather than going to court is calling for a revolution!! Mobilising people to overthrow the government!! Is that the growing democracy you are talking about? Can Hillary Clinton, with that Trump is doing in America, call for a revolution? They are rather impeaching Trump and that is democratic. Forget all the drama of resisting arrest and churning out high propaganda. After all Sowore need to tell Nigerians what went wrong with the government his Sahara Reporters vigorously campaigned for in 2014”