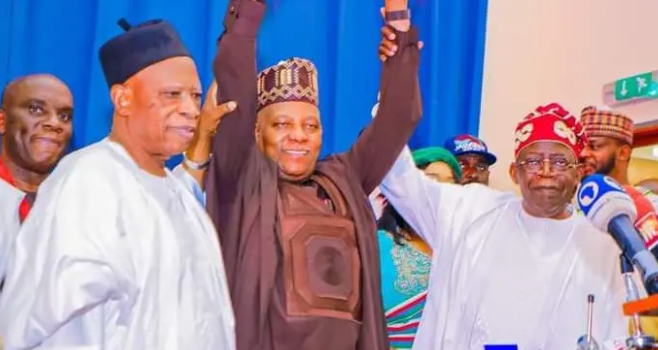 Shettima’s unveiling as Tinubu running mate: We’ll constitute an obstacle to the victory of our party-Adamu

by afrikanwatchngr@gmail.com
By James Okoro, News/Comments, July 21, 2022 ABUJA-The National Chairman of the ruling All Progressives Party, APC, Senator Abdullahi Adamu, has said that, the former Lagos state Governor and the Presidential Candidate of his party in the 2023 election , Senator  Asiwaju Bola Tinubu, has chosen to walk along the path of great Nigerians like... Read More

ABUJA-The National Chairman of the ruling All Progressives Party, APC, Senator Abdullahi Adamu, has said that, the former Lagos state Governor and the Presidential Candidate of his party in the 2023 election , Senator  Asiwaju Bola Tinubu, has chosen to walk along the path of great Nigerians like late MKO Abiola in picking Sen. Kashim Shettima, as his running mate, stressing however, that a great challenge has been posed on the party with the Muslim-Muslim ticket.

Adamu made this known on Wednesday in Abuja at Musa Yar’adua’s centre during  the unveiling of Tinubu’s running mate, Sen. Kashim Shettima, a former two-term governor of Borno State. Stating that, the party must face the consequence of its action “It is now time for the APC to step out to the public space with one of its best. Since the presidential candidate of our party, Asiwaju Bola Tinubu, announced the choice of his running mate on July 11, the nation is yet to know who he is, we welcome this opportunity to unveil him. As the national chairman of our party, it is both my honour and duty to unveil this distinguished son of our country and formally present him to this august body and through it, the Nigerian public,” .

The Chairman however retraced the step taken by the late MKO Abiola in 1993 presidential election, in picking a Kanuri man, Alhaji Babagana Kingibe from the North-East as his running mate, which Tinubu feels is best for him to follow.

“We are beginning to suspect there must be some synergy between the Yoruba people and the Kanuri people. Maybe there is a mutual attraction between them that the rest of us do not know, never mind, we will put the searchlight on them,”  According to Adamu, the 1993 MKO Abiola-Kingibe presidential ticket and the current Tinubu-Shettima ticket, bridged one of our fault lines in the management of our diversities.

Adamu recall  that Nigerians during Abiola’s time massively voted for Muslim-Muslim ticket because they believed him, as he was a man who opened his arms to every tribe and religion in the country to run an inclusive government. He said that Tinubu was tolling that part and have no doubt that if he wins, will bring relief to all Nigerians.

“He has used his wealth to bring succour to the needy, he can be trusted to run an inclusive government in which character, competence and vision matter to his administration.Our party has produced a candidate who is accepted by all zones in our country, he enjoys the trust of every strata in our national socio-economic structure.

“We are confident that Nigerians will entrust him with the leadership of our country in 2023. We offer our gratitude to Nigerians for the continued trust they repose on the APC.In our political tradition, the choice of a running mate is the exclusive right of the presidential candidate,” Adamu noted

Dwelling on why Tinubu decided to jettison national outcry on same faith ticket, Adamu noted competence and proved track records was ultimate but stressed that Tinubu knows why he made the choice.

“At this time in our national development, and given the myriads of our national challenges, we should look for men and women of character, competence and demonstrable evidence of their performance in public or private offices.We believe these informed Tinubu’s decision to select Shettima because he fits the bill.

“Shettima brings to the joint ticket impressive antecedents as a political leader and administrator, Tinubu could not have made a better choice of a running mate. He chose a man he believes can partner with him to undertake the urgent task of our economic recovery as well as social and political development in peace and security,” he said.

Adamu said that Shettima never abandoned his people, but continued to serve them under virtually impossible conditions.

“Shettima is not a stranger to the security challenges confronting our dear country going by his personal and first hand experiences with Boko Haram while they were at the peak of their operations in Borno. He has earned his right to a higher political office, he must now move up the ladder of our national service as the next Vice-Presidential of Nigeria.

“The unveiling of the Vice-Presidential candidate today sends out a strong signal to the country that our great party is ready and united around the common cause of coasting home with victory at every level in 2023.But we must not be unmindful of the hurdles ahead, it is time to purge ourselves of the bitterness arising from our individual losses in the party primaries. :It it time to submit ourselves to the will of God and the party and do nothing to sabotage its well-laid plans for victory. The other political parties want what we want, and that is, to win and form the next government.

“If by any acts of omission or commission we give in to bitterness and pettiness or fail to see the larger picture or take any of the political parties for granted. We will constitute an obstacle to the victory of our party.”

Email us @: afrikanwatch122@gmail.com, for your interview on national issues, or article, commentary or event coverage. View our services and profile by clicking about Afrikanwatch Network and Service.

Eminent Nigerians who have received Afrikanwatch Gold Merit Award in the last 9 years-Editorial
Previous Post
2023:Your beer parlour narrative of history is misleading, Tinubu hits back at Atiku