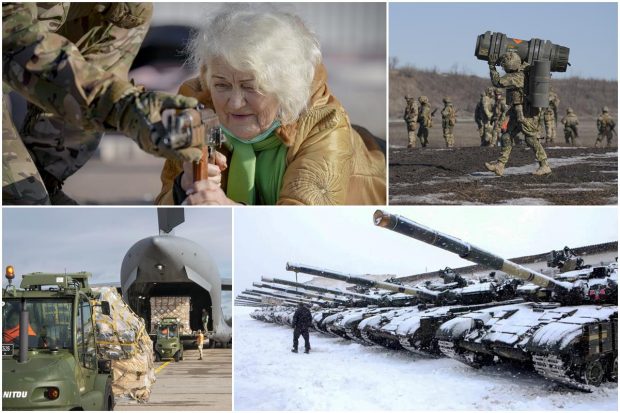 by afrikanwatchngr@gmail.com
-March 15, 2022, News/Comments Russia said Sunday that negotiators were making headway at talks to resolve war in Ukraine, more than two weeks after President Vladimir Putin ordered his army over the borders of its pro-Western neighbour. This is as Turkey sought Russia’s help to evacuate its citizens stranded in Mariupol Here are the latest... Read More

Russia said Sunday that negotiators were making headway at talks to resolve war in Ukraine, more than two weeks after President Vladimir Putin ordered his army over the borders of its pro-Western neighbour.

Here are the latest developments in Russia’s war in Ukraine:

– Over 2,100 killed in Mariupol – More than 2,100 residents of Ukraine’s besieged city of Mariupol have been killed since hostilities began, the local authorities say, raising the toll by almost 1,000 since Wednesday.

A convoy of aid heading for the strategic southern port, where residents have been trapped without running water and power for close to two weeks, is blocked at a Russian checkpoint.

Mariupol faces “a worst-case scenario” if the warring parties do not urgently reach a “concrete humanitarian agreement”, the International Committee of the Red Cross (ICRC) warns.

– 35 dead near Polish border –
Thirty-five people die and more than 130 are injured when Russian troops launch air strikes on a military training ground outside Ukraine’s western city of Lviv, near the border with NATO member Poland, local officials say.

– Battles rage outside Kyiv –
Fighting rages in the Kyiv suburbs as Russian forces advance ever closer to the capital. Only roads to the south remain open and Kyiv is preparing to mount a “relentless defence”, according to the Ukrainian president’s office.

Bucha to the northwest is entirely held by Russian forces along with parts of Irpin, Ukrainian soldiers at the scene tell AFP.

– ‘Foreign mercenaries’ killed –Russia says that an airstrike it carried out in Ukraine, near the Polish border, killed “180 foreign mercenaries” who had joined Kyiv’s army in its fight against Russia.

– US journalist killed –
A US journalist is shot dead in Irpin, medics and witnesses say, becoming the first foreign reporter killed since Russia’s invasion. Papers found on the reporter’s body identify him as 50-year-old video documentary maker Brent Renaud.

– ‘Progress’ at talks: Russia –
Leonid Slutsky, a senior member of Russia’s negotiating team, says that “significant progress” has been made following several rounds of talks hosted on the border of neighbouring Belarus to resolve the fighting.

– Pope urges end to ‘massacre’ –
Pope Francis issues a plea for an end to the “massacre” in Ukraine, saying there is no justification for attacks on civilians.

– Mykolaiv strike –
Eleven people are killed in a strike on the southern city of Mykolaiv, the regional governor says. The city lies on the road to the port city of Odessa, around 100 kilometres (62 miles) away.

– 1,300 Ukrainian troops killed –
“Around 1,300” Ukrainian soldiers have been killed since the start of the invasion, Ukrainian President Volodymyr Zelensky says, the first time he has given a toll for Ukraine’s forces. Russia said on March 2 it had lost 498 soldiers but Zelensky says the figure is closer to 12,000.

At least 579 Ukrainian civilians have been killed, the UN says, stressing that the real toll is probably much higher.