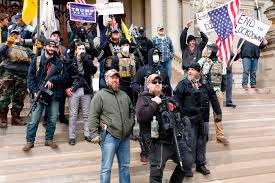 by afrikanwatchngr@gmail.com
By Mark C. Orgu, News/Comments, January 7, 2021 US-President-elect of the United States of America, Joe Biden has described President Donald Trump’s supporters’ disruption of Congress yesterday at Capitol as an embarrassment and insurrection to democracy and the people of America, stressing again, that Trump must respect the power of the people who voted massively... Read More
Just-in :Itoghor, Udoma , and Orgu, congratulate Igbuzor, hail DSP, Omo-Agege,

US-President-elect of the United States of America, Joe Biden has described President Donald Trump’s supporters’ disruption of Congress yesterday at Capitol as an embarrassment and insurrection to democracy and the people of America, stressing again, that Trump must respect the power of the people who voted massively for a change and return to true democratic administration. 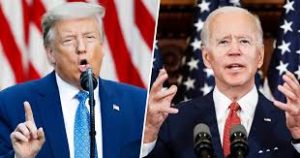 Meanwhile, CNN had reported that President Trump supporters breached the Capitol and one woman was shot when a protest spiraled out of control, interrupting Congress’s count of electoral votes to certify President-elect Joe Biden’s win. Biden is due to assume the presidency later this month. “The violence erupted after Trump spoke to protesters to repeat his false claim that he won the US election in November.

With the continuous threat and refusal by the outing President Trump to accept defeat, keeps generating tension and security threat to the adorable and admirable democracy in USA as a model. As to this regard, World leaders have appealed to Trump to concede defeat and caution his supporters to follow the path of peace, describing the chaotic scenes of his supporter’s disruption of congress as “shocking” and “disgraceful.”

“Canadian Prime Minister Justin Trudeau tweet:  “Canadians are deeply disturbed and saddened by the attack on democracy in the United States, our closest ally and neighbor. Violence will never succeed in overruling the will of the people. Democracy in the US must be upheld — and it will be.”

New Zealand Prime Minister,  Jacinda Ardern tweets, “What is happening is wrong. Democracy — the right of people to exercise a vote, have their voice heard and then have that decision upheld peacefully should never be undone by a mob.”

Norwegian Prime Minister tweets:  Erna Solberg. “What we are now seeing from Washington is a completely unacceptable attack on democracy in the United States. President Trump is responsible for stopping this. Scary pictures, and amazing that this is the United States”President Trump and several members of Congress bear substantial responsibility for developments,”

Irish Minister of Foreign Affairs Simon Coveney : “Shocking & deeply sad scenes in Washington DC — we must call this out for what it is: a deliberate assault on Democracy by a sitting President & his supporters, attempting to overturn a free & fair election! The world is watching! We hope for restoration of calm,”

As the drama  continuing to unfold, countries whose citizens reside in US have advised their citizens not to join in unholistic process of demonstration of denying democracy built by the founding fathers of America more than 200 years ago. This is coming on a heed of the  January 6 mass protest in DC Washington, and the local authority have announced an emergency curfew. However, various world leaders in Iceland, France, Austria, Poland, Ecuador, Colombia and Scotland and others, have reminded the US of its role as a model of democracy in the world, and expressed disbelief at the breach of the US Capitol

CNN has also captured the following “This is not America,” wrote European Union High Representative Josep Borrell, describing  the mob’s actions as “an unseen assault on US democracy, its institutions and the rule of law.”

“The United States stands for democracy around the world,” wrote UK Prime Minister Boris Johnson on Twitter. “The US Congress is a temple of democracy. To witness tonight’s scenes in #WashingtonDC is a shock,” said President of the European Council Charles Michel.

NATO Secretary General Jens Stoltenberg urged Americans to respect the outcome of the November election — a call echoed by European Parliament President David Sassoli, who added, “We are certain the US will ensure that the rules of democracy are protected.”

Ursula von der Leyen, President of the European Commission, also wrote, “I believe in the strength of US institutions and democracy. Peaceful transition of power is at the core. Joe Biden won the election.””I look forward to working with him as the next President of the USA,” she added.