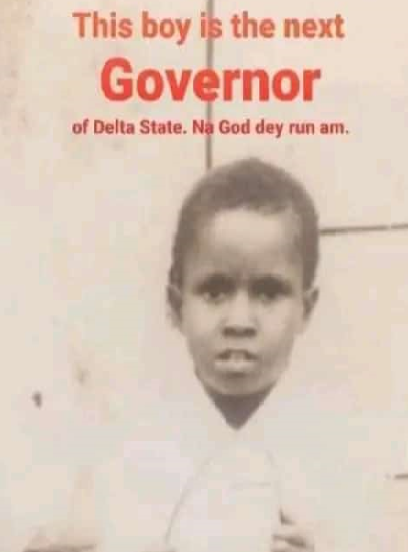 by afrikanwatchngr@gmail.com
“I am super excited that Senator Ovie Omo-Agege and Rt. Hon. Osanebi Ossai Friday are presenting EDGE (Employment and Empowerment, Development, Good Governance and Ensuring Peace and Security) to BAND (Build A New Delta) agenda – A model for all round development of Delta State. It is an idea whose time has come” –September 3,... Read More

“I am super excited that Senator Ovie Omo-Agege and Rt. Hon. Osanebi Ossai Friday are presenting EDGE (Employment and Empowerment, Development, Good Governance and Ensuring Peace and Security) to BAND (Build A New Delta) agenda – A model for all round development of Delta State. It is an idea whose time has come”

COMMENTARY-The first time I stumbled on the photograph of this little child, Ovie, who is now Senator Ovie Omo-Agege (The incoming Governor of Delta State), I took a circumspect look at the photograph and what came to my mind was the thoughtful and irrefutable words of wisdom by Charles de Gaulle which says; “Nothing great will happen without great men, and great men are great only if they are determined to be so”.

Who would have believed that the young boy in this photograph would rise to the seat of Deputy Senate President of the Federal Republic of Nigeria and the next Governor of Delta State, come 2023,  by the special grace of God Almighty. The truth is that  we may be too bamboozled by his current status in the country and in life that we may forget the bitter truth that he didn’t get to where he is today by accident. First, God Almighty favoured him, but he equally worked extremely hard to get to where he is today. He planted the seed of greatness that he is enjoying today. He was determined to be  great and he channeled his path towards greatness step by step.

Mahatma Gandhi understood how our actions shape our future, hence he made this very philosophical statement,; “The future depends on what we do in the present”. Senator Ovie Omo-Agege present actions only goes to prove that he is a caring leader and he has the WILL to make his people happy.

If you take a journey down memory lane from the creation of the State, you will  understand vividly how the heavily  and naturally endowed Delta State has found herself in a terribly deplorable situation in all spheres of socio-political and socio-economic narratives as a result of wicked leaders and bad governance over the years. I mean leaders who sowed the seeds of destruction of our beloved and lavishly blessed State.

The example of Governor Ifeanyi Okowa as Governor of Delta State would make a classic illustration of a PhD dissertation on the topic, “HOW NOT TO  GOVERN A STATE”. From the time he unfortunately became the Governor of the State till date, he has consistently and successfully taken actions that has reduced Delta State to one of the most backwards States in Nigeria, despite the mind blowing monthly Federal allocations and internally generated revenue, as well as his unbridled passion and appetite for securing loans that are not accounted for and nothing to show. Delta State is indeed, in a mess. Why are we so blest?

The focus of this write up is not to lament, but to remind Deltans both young and old that we must wake up from our political slumber and drive the process of freeing our State from the hands of demonically selfish leaders who do not believe in the betterment of Delta State. More than ever before, the collective efforts of all Deltans are needed to emancipate the State and return her to her lofty heights, to the admiration of the comity of other States.

The 2023 gubernatorial election in the State presents a golden opportunity for Deltans  to rewrite our bitter experiences that the successive PDP administrations have put us through for many years now. In this regard, I am super excited that Senator Ovie Omo-Agege and Rt. Hon. Osanebi Ossai Friday are presenting EDGE (Employment and Empowerment, Development, Good Governance and Ensuring Peace and Security) to BAND (Build A New Delta) agenda – A model for all round development of Delta State. It is an idea whose time has come.

His Excellency, Senator Ovie Omo-Agege is not a man that needs to struggle to convince Deltans that with him as Governor of the State that  he  has the WILL to serve Deltans from his track record of achievements, through Interventions he has made as Senator to make like meaningful for Deltans and also to hit the ground running, he already has a working template and visionary blueprint that would produce better life for all Deltans. His representation at the Nigerian Senate has shown his unmatched ability to embarrass his people with pro-masses projects across his senatorial district and even beyond. It is certain that he will embarass Deltans with sustainable projects which will impact the lives of Deltans. His representation at the Senate is a pointer of a man who would make deliberate plans to change the unpalatable narratives of Delta State in all ramifications. His track record attests to his ability and suitability for the number one position job of the State.

In summary, as Deltans we must always remember that “life is lived forward, but understood backwards”. The misrule of PDP over the years brought Delta State to her pitiable  stagnant situation. They can’t give what they don’t have (they don’t have solutions to the problems they have created). Senator Ovie Omo-Agege and Rt. Hon. Osanebi Ossai Friday are the liberators of Delta State. We must not miss the opportunity of enjoying better experiences that the Senator Ovie Omo-Agege and Hon. Osanebi Ossai administration would orchestrate. We need fresh air!

It is time to change the narratives! It is time to showcase Delta State as one of the leading States in Nigeria. It is time for every Deltan to be proud to be a Deltan and the man to trust for this job that will bring about a “New Delta” is Senator Ovie Omo-Agege.