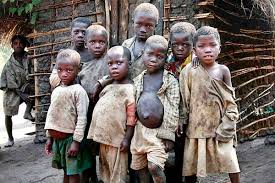 Nigeria’s population will rise to 400 million by 2050, yet, poverty reigns supreme-Editorial

by afrikanwatchngr@gmail.com
“All over in a civilised world, those who are desirous or desperate to make monies go into business or private sector, but those who wish to serve the public through leadership positions go into serving with the mind of true service. To serve, not to be served” Today, the story and the narrative of Nigeria’s... Read More

7 unique egg decorating ideas for you to try this Easter

“All over in a civilised world, those who are desirous or desperate to make monies go into business or private sector, but those who wish to serve the public through leadership positions go into serving with the mind of true service. To serve, not to be served” Today, the story and the narrative of Nigeria’s poverty level has not changed, but remains in  increase, due to the lack of good leadership system, lack of poor planning and data upkeep of citizens,  lack of better policy implementation and no establishment of well reliable institutions for emergency and future event”

EDITORIAL-Why is  it that , Nigeria is always given bad image all the time, does it mean nothing good can come out of us ?, why is it that, western world, in any slightest opportunity to dent Nigeria’s image, they utilize it very well, yet our leaders still worship and pay secret homage to them as mini-gods. Why can’t we for once change our attitude and prove these white men wrong, that we are endowed with fortunes and abundance of talents, human resources capital development and men of high standards, who are making the country proud and of course, the blessings from the Almighty God. First, Western world capitalized on our weaknesses and low trusted leaders, who know how to waste our collective resources and put sorrow on the faces of her citizens. In other words, they refer to us as “inferiors and low brain people, who cares less for her masses” –A failed leadership system.

Several years ago, there was a leadership programme held in Columbia Business School, Columbia University, New York and apart from the issues discussed was the problems of Africa desperation towards leadership. Meanwhile, they narrowed down the problem of leadership in Africa to desperation and wealth making to the detriment of the people they claim they govern. And so, the problem in Africa, especially Nigeria is the eagerness to make quick money, and we wonder what a greedy and money seeker is looking for in a public service like ours.

All over in a civilised world, those who are desirous or desperate to make enormous wealth go into businesses or private sector, but those who wish to serve the public through leadership positions go into serving with the mind of true service and sacrifice. To serve, not to be served.  Many of our elected leaders today in a normal circumstance deserves not to be in leadership position but because they had won election before it was even announced. And that was why most political scientists described Nigeria as a country with historical precedents, where election results are declared before the actual voting take place, and power is then taken by force. This was what William Shakespeare described in the Macbeth; “make the sitteth heart knock at my ribs against the use of nature-some revelations, a few evidence was led and proved, are blooded cuddling”

Today, the story and the narrative of Nigeria’s poverty level has not changed, but remains in increase, due to the lack of good leadership system, lack of poor planning and data upkeep of citizens, lack of better policy implementation and no establishment of –a well reliable institution for emergency and future occurrence, as a means of preparation against any unforeseen odd like the Coronavirus pandemic ravaging the world with thousands of people already dead and millions effected.  Now, CNN had happily reported just yesterday of Nigeria’s retrogressiveness and happy backwardness with no meaningful effort to change the country’s narrative to glory. The report reads  “Forty percent of people in Nigeria live in poverty, figures published by the statistics office on Monday showed, highlighting the low levels of wealth in a country that has Africa’s biggest economy. The National Bureau of Statistics (NBS), in a report about poverty and inequality from September 2018 to October 2019, said 40 percent of people in the continent’s most populous country lived below its poverty line of 137,430 naira ($381.75) a year. It said that represents 82.9 million people. 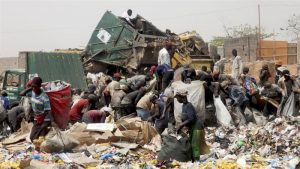 Nigeria is the top oil exporter in Africa, which has helped to create wealth related to crude sales that account for more than half of government revenue. But a failure to diversify the economy and build much-needed transport and power infrastructure has stymied growth and the spread of wealth beyond a rich elite”.

CNN went further to state: “Rapid population growth outstrips economic growth, which stands at about 2 percent. The United Nations estimates that Nigeria will have a population of 400 million by 2050. Nigeria was already struggling to shake off the effect of a 2016 recession before the new coronavirus pandemic hit economies worldwide. In Nigeria, 40.1 percent of total population were classified as poor. In other words, on average four out of 10 individuals in Nigeria has real per capita expenditures below 137,430 naira ($352) per year,”  The statistics office said it did not include Borno, the state worst hit by the decade-long Boko Haram armed uprising, because many areas there were not safe to reach. A total of nearly eight million people need humanitarian assistance across Borno and two neighbouring states affected by the attacks, according to the UN. The statistics office said 52 percent of people in rural areas live in poverty, compared with 18 percent in urban parts of the country. It said the highest poverty levels were in the northwest state of Sokoto, where 87.7 percent of people live under the poverty line compared with 4.5 percent in commercial hub Lagos state, which had the lowest rate”

This is where we are, as a country that once strived and was enviable in all endeavors. Where did we get it wrong, are our leaders not seeing things clearly, what must be done, and where do we begin from.  These are the questions begging for answers. Well, as usual, let us pray and hope for a true messiah of leadership to come and redeem Nigeria. However, Nigerians should not wait anymore for any government for redemption but take their destiny by their hands, by engaging themselves in a most productive ventures like technical skills, entrepreneurial mind-set while remaining law abiding citizens. The time to exploit potentials is now, and create a name, is now. Like what George W. Washington of blessed memory told the Americans, “think of what you can do for your country, not what your country would do for you”. This, should be our motivation for success.