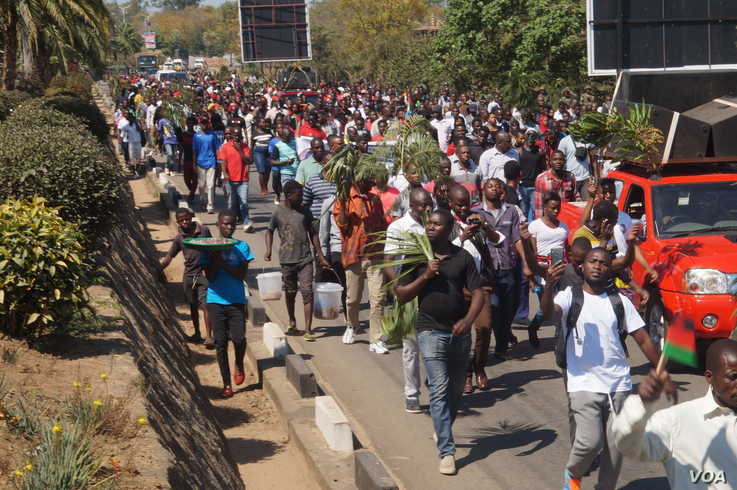 by afrikanwatchngr@gmail.com
-February 4, 2020, news/comments LILONGWE, MALAWI – What many political scientists and commentators described as a new political stage-set-in by the Malawian court, citing a working legal system in Africa. This is coming as the Court sacked its president on a basis of massive election rigging, irregularities and none compliance with electoral standard.  The election... Read More

LILONGWE, MALAWI – What many political scientists and commentators described as a new political stage-set-in by the Malawian court, citing a working legal system in Africa. This is coming as the Court sacked its president on a basis of massive election rigging, irregularities and none compliance with electoral standard.  The election which was won by the ruling party candidate, President Peter Mutharika, last year May has now been crushed by the country’s constitutional court in Malawi on Monday. (Previous day), thereby ordering a fresh elections within 150 days and also reinstated former Vice President Saulos Chilima.

The verdict which was read by the lead Judge Healey Potani, spurred instant jubilation from opposition supporters who attended the court session. In the 500-page judgment, the court cited various irregularities and anomalies petitioners had brought before the court against the Malawi Electoral Commission (MEC). These irregularities included the use of correction fluid, uses of duplicate forms and lack of signatures on some result sheets. The court also found that MEC had breached constitutional provisions demanding transparent elections. The lead lawyer for Chilima, Chikosa Silungwe, said he was happy with the verdict.

“We are contented with the judgment,” he said. “Right from the start, we based our case on three pillars. The first one was the qualitative argument. The second one was [the] irregularity argument. And the third one was [the] fraud argument. When the court asked us to answer the three constitutional questions, the court has actually agreed with our argument.”

The judgment can be appealed to the Supreme Court, but MEC’s lawyer, Kalekeni Kaphale, said the commission had yet to decide.  “I will have to take instructions and then do what clients tell me,” Kaphale said. “We will have to examine those findings with the client and come up with the decision.”

It could be recalled that Saulos Chilima, leader of the opposition United Transformation Movement Party (UTMP), and Lazarus Chakwera, leader of the Malawi Congress Party had filed a case before the court,challenging the victory of the president.

The MEC declared Mutharika the narrow winner of the May election with 38% of the vote, followed by Lazarus Chakwera with 35% and Saulos Chilima with 20%. The judges also challenged the electoral system, noting that the Constitution says the winner must receive a majority of votes cast. It called for a new law to guide fresh elections.

For Lilongwe resident Rose Dunga, the verdict portrayed the country’s maturity in democracy.

“It’s a welcome development to me to have fresh elections, because [it] shows that Malawi has matured in democracy,” she said. “Because if there were no fresh elections, there could have been some misconceptions and speculations about our democracy.”