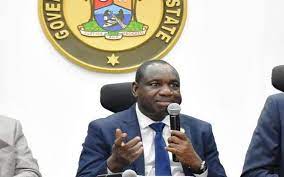 by afrikanwatchngr@gmail.com
By Daniel Njienue, News/Comments, August 10, 2021 The Lagos state commissioner for information, Mr. Gbenga Omotoso has charged Lagosians to remain hopeful for better housing units across the state. He made this known during a courtesy visit by the Editor-in-Chief of Afrikanwatch Network, Mark C. Orgu in his office, last week at the state secretariat... Read More

The Lagos state commissioner for information, Mr. Gbenga Omotoso has charged Lagosians to remain hopeful for better housing units across the state. He made this known during a courtesy visit by the Editor-in-Chief of Afrikanwatch Network, Mark C. Orgu in his office, last week at the state secretariat complex, Alausa.

The Commissioner noted that Lagos state is building housing units for residents so as to live comfortable and affordable accommodation. “Looking at the size of Lagos, you will find out that these housing units are just a drop in the ocean. We started with that of Jakande housing unit and have commissioned the ones in small areas within the state”.

Omotoso reiterated why people in the private sector should partner with the state government to distribute mass standard housing units such as skyscrapers to the citizens with a low renting rate. “There are plans for the government to partner private sector to control estate transactions between owners of property and tenants, so that they will not have a license fee-attitude to increase their rent anyhow. You cannot exploit people or take advantage of them by inflating accommodation charges anyhow”

He narrowed down the high cost of accommodation in the state to the uncontrollable movement of people as enshrined in the 1999 constitution, saying that the trooping of people into the state for greener pasture has created more challenges.

The former Editor of the Nation stated that, as the population of the state continued to grow geometrically, the government decided to come out with the Lagos State Residents Registration Agency, LASRRA so as to know its real population, and plan better welfare and development.

“We should be able to see things at any point in time, we should have a total number of people in Lagos, so that we can easily classify those, who cannot even take care of themselves, those who are old, those who are retired, and those who are living with disabilities. When we have such data, we will be able to cater for them”.

Omotoso however reiterated that some people believe that when they are asked to come and take LASRRA card, it’s an attempt to make them pay tax. “It is not about taxation at all but about development. Is all about gathering data, because without such, no society can move forward. Everyone should apply for it. We need to ensure that our people are included in the state plan. This is made possible with data”

Meanwhile, in another development, he spoke widely on the population census of Lagos, stating that the state have not monitored any population census, but said, the last census, Federal government puts the state at 14 million. “As I speak, Lagos population is more than 22 million. If anybody has told me that Lagos population will rise up to that size of labels in comparison with the other mega cities of the world, such as New York, Johannesburg, etc. I think Lagos population would be about 25 million. The last time we had a record of the number of people that comes into Lagos, we had an estimated figure of 1000 people daily. All you need to do to confirm the figures is, just go and stay at Julius Berger bus stop, then you will see how trucks and buses are conveying people from all over West Africa to Lagos state.