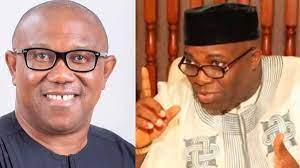 by afrikanwatchngr@gmail.com
By Gbenga Ojo, July 6, 2022, News/Comments The placeholder Vice Presidential Candidate of the Labour Party, (LP), Dr. Doyin Okupe has said on Channels TV political roundoff programme on Tuesday, that the talk on alliance with the New Nigeria Peoples Party (NNPP) has collapsed a month again when he asked the party leadership whether it... Read More

The placeholder Vice Presidential Candidate of the Labour Party, (LP), Dr. Doyin Okupe has said on Channels TV political roundoff programme on Tuesday, that the talk on alliance with the New Nigeria Peoples Party (NNPP) has collapsed a month again when he asked the party leadership whether it would be fair to have another 8 years of a Northern extraction as Nigerian President after President Muhammadu Buhari, that their response was disappointing when they insisted to have the presidency. “It was on this I considered the alliance dead and buried on arrival” Okupe further noted that, anything less than fairness, equity and justice, LP will not accept, pinpointing that the influence of Sen. Rabiu Kwankwaso, the NNPP Presidential candidate , whom he thought was a nationalist is not, and of course, his area of influence is limited to Kano,which his vision does not align with that of the Nigerian youths.

“For Kwankwaso to come on national television to play an ethnic card, saying the north will not vote for a candidate in the south-east, this is a man that is electorally restricted to Kano and that’s the problem,” Okupe said.

The former Media spokesperson to former President Goodluck Jonathan reiterated however that, the former Governor of Kano cannot just sit in Kano and use the parameter of supports he gets there to conclude of victory

“He’s judging everybody else in the north with the prism of what he sees in the Kwankwasiyya movement in Kano. “How do you measure seniority in politics? Is it age or how many years you’ve been in politics? And that’s not the issue right now.The  issue is who can solve the problem facing the country. What Kwankwaso is delving into and relying on is that he’s been speaker of the house of assembly, a senator, a governor for two terms. That doesn’t answer the question the young Nigerians are asking”

“The young Nigerians are saying ‘our future is in dire straits and we need a man that can drive the country well’. Kwankwaso has nothing in his background that convinces anybody that he can match Peter Obi. It’s not a matter of seniority; it’s a matter of capacity”. “Those discussions about mergers, alliance were led by me from our side and it’s dead and buried. The Labour Party and its presidential candidate have long since withdrawn from that conversation. It was NNPP that tried to continue to benefit from the traction of the popularity of Obi. The talk about the alliance had been dead for over four weeks”