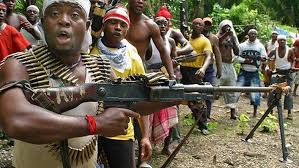 Just-in:Rivers poll: FG is inviting war in the Niger Delta, we will match them gun to gun-Dreadful Militants kick

by afrikanwatchngr@gmail.com
-March 13, 2019, news/comments As the tension remains in Rivers state over the halts of the March 9, governorship and state House of Assembly election results by the Independent Electoral Commission, INEC, on an alleged violence and thuggery , which became paramount for the commission to do the needful as a way of bringing normalcy,... Read More

As the tension remains in Rivers state over the halts of the March 9, governorship and state House of Assembly election results by the Independent Electoral Commission, INEC, on an alleged violence and thuggery , which became paramount for the commission to do the needful as a way of bringing normalcy, continue to generates criticism across the country. Meanwhile, a group known as Amalgamated Niger Delta Volunteer Force (ANDVF), has issued a warming to the Federal government over their interest to subvert the will of the people of Rivers State, using disgruntle elements, and vowed to unleash serious attacks on oil installations across the Niger Delta region , thereby cripple the nation’s economy.

In a statement signed by Comrade Orunene Alagbarigha, and made available to journalists with a titled “Operation Red Warning: Desist or We March Force with Force”, the group noted that the Niger Delta region has suffered casualties of death and desecrations of kingdoms in the hands of federal government through military invasions of Kingdoms. The statement reads:

“We are pained at the current developments in the Niger Delta especially in Rivers State in the last 72 hours where our mothers, young girls and innocent children have been raped, killed at point blank, brutalized and the entire community forced out of their homes into the forest, swamps and exposed to all manner of harm and danger; traditional institutions and shrines brazening desecrated all in an attempt to foist upon the people alien and undemocratic governance process of selection thus depriving our people their fundamental rights to vote and elect leaders of their choice at all levels as enshrined in our constitution.

“As peace-loving people, we deemed this action as evil, wicked and unprovoked attack on our people and can therefore no longer consider these undemocratic developments as fair play and to fold our arms and watch while an army of uncivilized occupation is unleashed on our people.

“We are equally aware of the plans by the federal government to instigate crises as an excuse to declaring a state of emergency and unleashing more mayhem on our people. We are too civilized to allow this to happen in this 21st century.

“As a people whose resources is the mainstay of the nation’s economy and on whose resources and accommodating nature and lifestyle the country armed forces have magnanimously benefited from since colonial times by the procurement of hardware for the entire military and their welfare to turn and use same equipment upon the people who have borne the brunt of economic deprivation, hardship and environmental devastation spanning decades is to say the least evil as it goes against all norms of human decency, dignity and equity.

“By the Nigerian government actions, it is manifestly clear that war has been declared upon us and we hereby put the international community on notice that as a peaceful people, we are not afraid and never cowards. We promise to respond in a swift way and manner to reciprocate this gesture of wickedness by the national government of Nigeria.

‘We are sure our capacities to respond swiftly to unprovoked and unwarranted attacks on our people and communities, is not in doubt. We have proven that times without number and are ready to completely prove that again at the shortest possible time by making sure that we cripple all hydrocarbon activities in the entire region as our cells in all the region are now on red alert to respond immediately and swiftly.

“By this, all international oil companies operating in the region are hereby put on alert as we will not be held accountable for any harm that may befall their people and facilities should this undemocratic actions by the national Government of Nigeria in the guise of election security continue. “We will meet them force to force and will not fail nor falter in our quest to liberate our land from an army of occupation and oppression”