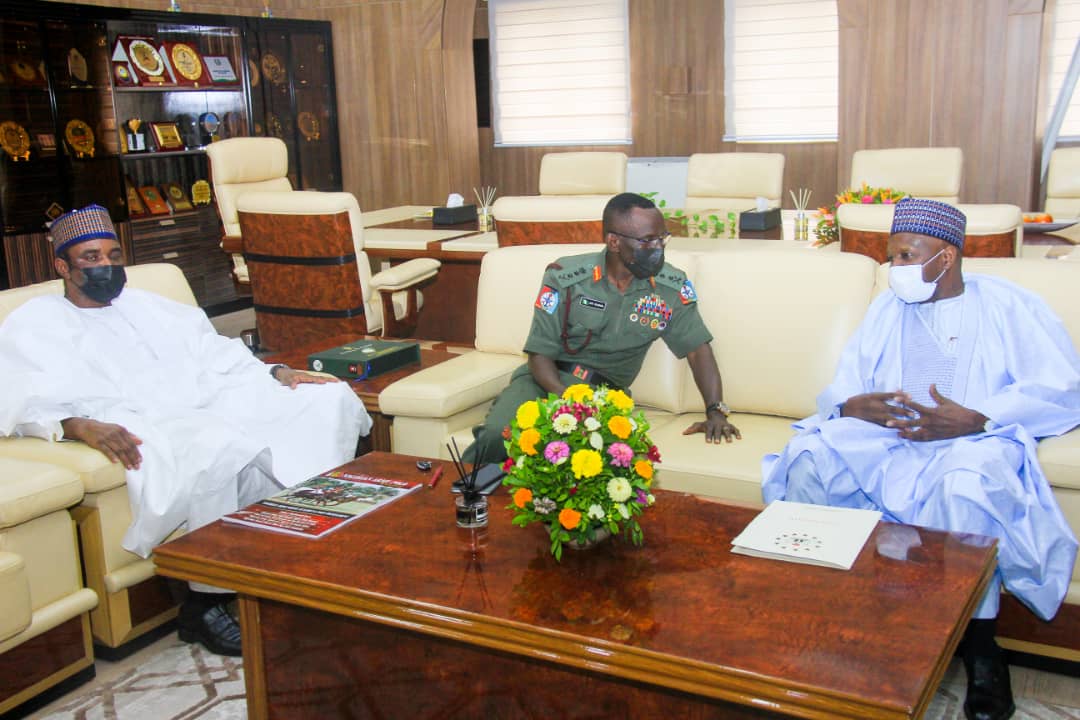 by afrikanwatchngr@gmail.com
By Ismaila Uba Misilli, News/Comments  ABUJA-Gombe State Governor, Muhammadu Inuwa Yahaya, earlier today visited the Chief of Defence Staff, General Lucky Irabor at the Defence Headquarters in Abuja in furtherance of his engagements towards ensuring that peace and security continue to prevail in Gombe State. Gen. Irabor with Governor Inuwa Governor Yahaya, who spoke to... Read More

ABUJA-Gombe State Governor, Muhammadu Inuwa Yahaya, earlier today visited the Chief of Defence Staff, General Lucky Irabor at the Defence Headquarters in Abuja in furtherance of his engagements towards ensuring that peace and security continue to prevail in Gombe State. 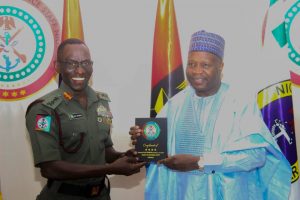 Governor Yahaya, who spoke to newsmen shortly after the meeting on the comforting role the State is playing towards hosting of Internally Displaced Persons, IDPs from neighbouring states, Borno Yobe and Adamawa, decried the effect of insurgency and its resultant consequences in the region, especially in putting a strain on its ability to adequately deliver essential services to the people. He equally observed the strange faces coming into the state as a result of pressure coming from the security forces in the neigbouring states against banditry, Boko Haram, herdsmen kidnapping among others.

“Secondly whenever pressure is put on the insurgents in a bit to move , they relocate and come up to settle around Gombe that is why we need to do the correct thing by putting up a proper safeguard so that we don’t allow the negative effects of insurgency to come and infiltrate and get settlement in Gombe”. The Governor stated that, given the current dynamics of insecurity, it behooves on all to work together to aid security personnel in the fight against all forms of criminality”.

He maintained that his administration will ensure the De-radicalization and Rehabilitation camp in the State, run by the Nigerian Army for repentant Boko Haram insurgents and give all the necessary support to operate effectively for the benefit of its clients and the people of the State.

On his host’s response to the prayers made, the Governor said, “We had fruitful and meaningful discussions on how security issues in the state can be tackled.” The visit also had in attendance, Senator representing Gombe North, Sen. Saidu Ahmed Alkali, Special Adviser to the Governor on Abuja Liaison, Hon. Usman Aliyu Garry and other aides.

Lagos Accommodation: You cannot inflate charges anyhow-Information Comm.-Omotoso, puts state population at 25m
Previous Post
Every woman in the continent of Africa must be educated-Dr. Jaiyesimi, as WINB-Africa holds workshop