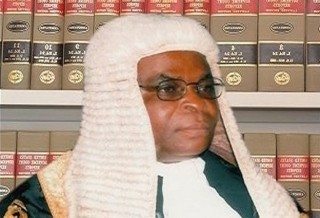 ABUJA—The Abuja Division of the Court of Appeal, on Thursday, ordered the Code of Conduct Tribunal, CCT, to stay further proceedings on the six count charge the Federal Government preferred against the Chief Justice of Nigeria, Justice Walter Onnoghen. Justice Onnoghen.

The appellate court ordered the Mr. Danladi Umar’s led tribunal to temporarily hands-off the matter till January 30, a date it fixed to deliver ruling on an appeal the embattled CJN lodged before it. A three-man panel of Justices of the appellate court led by Justice Abdul Aboki, gave the order after it listened to counsel to the CJN and that of FG, regarding what transpired at the tribunal last Tuesday.

When the matter was called up, counsel to the CJN, Chief Wole Olanipekun, SAN, who led 18 other Senior Advocates of Nigeria, traced the history of the case for the appellate court panel.   Olanipekun told the appellate court that FG had on January 11, through the Code of Conduct Bureau, CCB, commenced what it termed as investigtion of information contained in the assets declaration forms that were submitted by by the CJN.

His words said: “My lords, on that same day, the charge was filed before the CCT. By the next Monday being January 14, the tribunal issued a summon for the Appellant to appear. On that same day, the Appellant filed an appeal to challenge jurisdiction of the Tribunal’ “Likewise, the Respondent, on the same day, filed a motion asking the Applicant to step aside from office pending the determination of the substantive trial and for President Muhammadu Buhari to be compelled by the tribunal to swear in the most senior jurist of the Supreme Court as the acting CJN”.

He said in view of the development, the tribunal, on January 14 which was the first day the case came up before it, ruled that it would take both the applications by the CJN and that of  FG together. Olanipekun said the CJN who was dissatisfied with the decision of the tribunal, promptly filed a motion before the appellate court on January 18, as well as adduced eight exhibits to show why his motion and that of the prosecution should not be heard the same time.

In the said motion, the CJN prayed the appellate court to stay further proceedings in respect of charge No.CCT/ABJ/01/2019, pending against him before the CCT. He urged the court to suspend further action on his trial, pending the determination of his appeal. Olanipekun told the appellate court that regardless of four separate court injunctions that stopped further action on the matter pending determination of legal issues surrounding both the competence of the charge and jurisdiction of the tribunal to entertain same.

The CCT Chairman, in a ruling last Tuesday, insisted on proceeding with the trial. He told the court that aside Mr. Umar’s position that the CCT was not bound by orders from both the high court and the National Industrial Court, he equally refused to temporarily hands-off the matter to await the outcome of the CJN’s appeal. More so, Olanipekun noted that the same tribunal had in the case involving Justice Sylvester Ngwuta of the Supreme Court who was also slammed with non-assets declaration charge, held that its hands were tied by virture of an appeal the defendant lodged to challenge its jurisdiction. Olanipekun alleged that over 48 hours after the tribunal gave its ruling, it had yet to furnish the Applicant with a copy despite a letter that was written on behalf of the CJN.

He said the Supreme Court had previously held that in situation where an Applicant failed to adduce a copy of a contentious ruling, the appellate court, was at liberty to admit affidavit evidence, as well as certified newspaper publications on the subject matter in dispute. He said the CJN’s motion to temporarily halt further proceedings at the CCT was to avoid the foisting of a state of fait-accompli (helplessness) on the Appeal Court and thereby render his appeal nurgatory.

Olanipekun further drew attention of the appellate court panel to the fact that both the CCT and its Chairman are parties in all the pending cases. “We are urging my lords to protect the ‘Res’ of this matter which is not only about the office and position of the CJN, but about the judiciary and the constitution. The Res in this matter is serious and very unique.

There is a threat to the institution of the judiciary and the ruling of the tribunal further compounded the already existing conondurum. “The sanity and sanctity of the legal profession and the judicial process is at stake. We want to plead your Lordships to accede to our request and order stay of proceedings at the Code of Conduct Tribunal and also order accelerated hearing of the appeal. “I dare submit that there cannot be two kings in the palace.

The court of appeal has been seized of the matter and yet that tribunal want to proceed on Monday. “The urgency of this situation deserves an intervention of your lordships”, he pleaded. Meanwhile, on his part, FG’s lawyer, Mr. Oyin Koleosho, urged the appellate court to dismiss the CJN’s application. He argued that it was within the discretion of the tribunal and not the FG to decide whether or not the trial should be temporarily suspended. “It is not within the powers of the Respondent to on its own, stay proceedings.

It is the exercise of discretionary powers of the tribunal. “Exhibit A to A4 attached to the Applicant’s further affidavit clearly indicated that the tribunal adjourned to hear the application challenging its jurisdiction. “This exhibit equally shows that the adjournment at the tribunal was at the instance of this Applicant who sought for time to file his response. “There is nothing before this court to show that the application challenging jurisdiction of the tribunal and the one asking him to step aside were adjourned together.

“The exhibit will show that the tribunal adjourned to hear the motion challenging its jurisdiction.  “If an order of stay of proceeding is granted, how then can the tribunal take that motion challenging its jurisdiction? “It is our position that even if this appeal succeeds, it cannot terminate the charge against the Applicant or the proceeding before the lower tribunal. “The success of the instant appeal will be of no utilitarian value to the Applicant.

Therefore this appeal should not be the basis for granting a stay of proceeding. “In conclusion, we urge your Lordships to dismiss this application”, FG’s lawyer added. After it had listened to both sides, the appellate court panel adjouned for ruling, even as it ordered stay of proceedings at the CCT. “Ruling on this appeal is hereby adjourned till January 30, meanwhile the tribunal should suspend the proceeding before it pending the ruling”, Justice Aboki held. It will be recalled that the CCT had in a two to one split decision, adjourned till next week Monday to continue with trial of the CJN with hearing of all the pending applications. Whereas the Chairman of the tribunal, Umar, relied on section 306 of the Administration of Criminal Justice Act, 2015, to reject the CJN’s motion for staying of proceedings to await the outcome the appeal, a second member of the panel, Mr. William Agwadza Atedze, relied on section 287(3) of the 1999 Constitution, as amended, and plethora of Supreme Court decided cases, to insist that the CCT was under obligation to respect the four interim injunctions that restrained all the parties, including the tribunal, from taking further steps in the matter. Atedze noted that all the cases upon which the interim injunctions were granted, bordered on whether or not the CCT has the requisite jurisdiction to try the CJN on the strength of allegations FG levelled against him.  FG had in the six-count charge it lodged at the CCT, alleged that the CJN filed to declare his assets as prescribed by the law, as well as maintained foreign bank accounts. Meantime, on two consecutive dates, the CJN, declined to appear before the CCT to enter his plea to the charge.

Defend your votes against hungry politicians-TY Danjuma, says, there are plans to rig election
Previous Post
Breaking: We will shut down Nigeria within 7 days if Pres.Buhari fails to reverse suspension of CJN Onnoghen-NIM