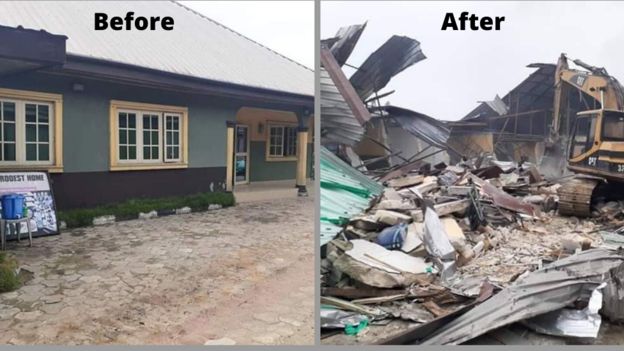 by afrikanwatchngr@gmail.com
By Gbenga Ojo and Janet Okafor, May 12, 2020 As the demolition of two hotels in Eleme by Governor Nyesom Wike of Rivers State continue to draw public criticism and attention, with some calling the Governor of being overzealous in the fight against Covid-19. The virus which began in Wuhan, China, in December 2019, known... Read More

As the demolition of two hotels in Eleme by Governor Nyesom Wike of Rivers State continue to draw public criticism and attention, with some calling the Governor of being overzealous in the fight against Covid-19. The virus which began in Wuhan, China, in December 2019, known as Covid-19 has resulted in more than 4.2 million infections and 287,000 deaths globally. This has also posed great negative economic impact globally. 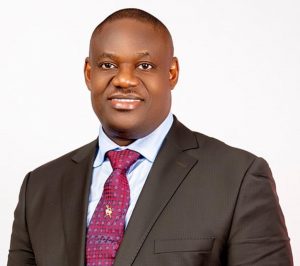 Meanwhile in a reaction to the destruction of the two hotels by Wike, is a former Deputy Governor of the state, Engr. Tele Ikuru, who said that those who referred to Governor Wike as being wasteful and overzealous against the fight on Covid-19 are doing so for cheat popularity and lack the true knowledge of situation that led to the demolition of the two hotels.  Ikuru however, sees the action of the governor as legal and commendable, stressing further that Wike has shown true leadership and commitment towards protecting lives and properties in the state. This was contain in a piece titled Governor Wike: The Ebullient Fighter, which was made available to Afrikanwatch Network via Whatsapp by the Deputy Governor. The piece reads:

“There comes a time when everyone must take responsibility and position on what happens within his or her environment. In the last several weeks, I have seen Governor Nyesom Wike throw his safety and comfort out of the window and place himself as a sacrificial lamb for the good of Rivers State and her people, thereby put himself in the war front as General against Covid-19, hence risking  his own health.  He personally took the gauntlet to curtail the spread of the dreaded virus in Rivers State despite the sabotage he encountered from other state actors. In other similar situation like cultism, kidnapping etc, the governor fought gallantly till the state became free from these men of the evil.” 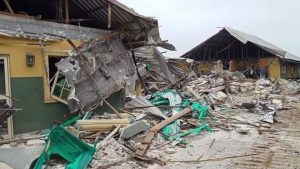 The former Deputy Governor noted that the reason while the state is witnessing low effected Coronavirus cases is due to the activeness of the governor. “That we still have a limited spread of covid’19 cases in Rivers State is directly attributable to the long-range decision and proactive actions he took. Governor Wike has shown leadership at a time when even the Federal Government has become rudderless and unable to proffer policy direction. Therefore, when I hear some ill-informed, social media slay-kings castigating the Governor over the demolition of hotels at Eleme and Onne, I knew I had to add my voice to at-least set the record straight”

“Impatience seems to be one attributes we have in short supply. Before we have the full facts of events, we have already reached a conclusion and pass judgment.

Truth be told, no elected Governor will just wake up and order the pulling down of business premises, not the least, one who is vast in law and elected under the circumstances that Governor Wike emerged. Therefore, I beg to disagree that Governor Wike will be so callous and unmindful to order the pulling down of hotels if all is well with the said hotels and the activities carried out therein. However when such occurrence ensues, we need to interrogate to get the real facts rather than fly to the social media to quickly make unsubstantiated statements. For the records, Under the anti-cultism law of Rivers State, whenever a cultist is identified, the law prescribes seizure and demolition of all proceeds of his crime. Though the owner of the hotels is a PDP youth leader, the fact that he was carrying a gun and that he shot at and injured some members of the state Covid’19 task force (some are still in the intensive care unit), require the invocation of the relevant law” 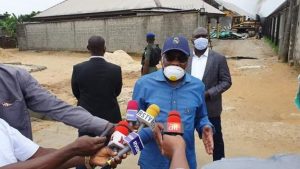 Governor Wike speaking with the press during the demolition

“Governor Wike did not hesitate to allow the hands of the law to intervene. The youth leader has since been declared wanted. The said hotels have been identified as proceed of crime. The law of the state prescribes the demolition of such property. The Governor followed the due process prescribed by the law. The demolition was the last stage. While the ill-informed are busy castigating Governor Wike, the people of Eleme are in silent jubilation over the removal of the cancerous hotels from amongst them. Thank you, Governor Wike, our ebullient fighter. Fight on. Our prayers are with you and the enemies of Rivers State will not overcome you’

Catholic Archbishop Kicks against reopening of Churches/Mosques, asks religious leaders to be cautious
Previous Post
Editorial: DSP, Omo-Agege and the bill that translated into the proposed Federal Polytechnic, Orogun