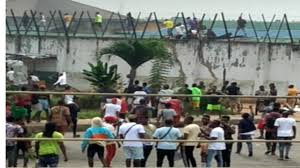 by afrikanwatchngr@gmail.com
By Daniel Njienue, News/Comment. October 19, 2020 ABUJA-A protest, also called a demonstration or remonstration is a public expression of objection, disapproval or dissent towards an idea or action, typically a political one. Protesters may organize a protest as a way of publicly making their opinions heard in an attempt to influence public opinion or... Read More

ABUJA-A protest, also called a demonstration or remonstration is a public expression of objection, disapproval or dissent towards an idea or action, typically a political one. Protesters may organize a protest as a way of publicly making their opinions heard in an attempt to influence public opinion or government’s policy, or they may undertake direct action in an attempt to enact desired changes themselves.

However, observers have noted the increased militarization of protest policing in Nigeria with Police deploying armored vehicles while using oppressive means against peaceful protesters. As this remains, protesters assume a form of open civil disobedience, and more subtle forms of resistance against the restrictions.

This menace has brought us into the current situation in Benin city, where the citizens of Edo State have decided to take laws into their hand during the END SARS protest agitation, which has led to the burning down of some police stations in the state and the breaking of Oko Correctional Service yard along Sapele road, white house in Edo State, Nigeria.

Meanwhile, speaking with Afrikanwatch Network on this sad scenario is one of the top  ranking officers of the Nigerian Correctional Service (NCS) who spoke  with our senior correspondent from  Abuja on telephone interview  (Name withheld),  saying  that the Service is yet to get report on the sad incident that took place at white-House Correctional Centre in Edo State. His words:

“Allowing the prisoners to go out of the Correctional yard will make the society more unsafe, and it is the people that will definitely suffer for it, because there’s no way such incident will happen and no one will pay for it”

Continuing, he stressed that, it is worrisome that prisoners can run away in a broad day light. “ Not even at night, day time for that matter, that they could escape,  so what will the officers on duty  say is their excuse?. I know, officers can be overpowered but at least one must make an attempt. In the case of no attempt then, you know that there is a foul play, conspiracy and indolence among the officers on duty and protesters.

afrikanwatchngr@gmail.com
View All Posts by Author
COMMENTARY: Time for referendum or create a new constitution—Nigerian-UK base- Samuel Taiwo Brown
Previous Post
Watching and waiting: It is time to adopt Mao Tse-Tung’s justification of good governance-Editorial