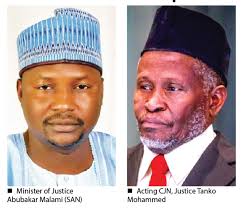 Judiciary already had their independence-Malami, CJN disagrees, says, no deity can influence our decision

by afrikanwatchngr@gmail.com
-By Mark C. Orgu, August 27, 2019,news/comments LAGOS-Mr. Abubukar Malami, the Attorney General of the Federation, has disagreed with Justice, Tanko Muhammed, the  Chief Justice of Nigeria, on the freedom of  judiciary in the country.  Malami firmly believed that it is out of place for anyone to say that the Nigerian Judiciary is not independent,... Read More

LAGOS-Mr. Abubukar Malami, the Attorney General of the Federation, has disagreed with Justice, Tanko Muhammed, the  Chief Justice of Nigeria, on the freedom of  judiciary in the country.  Malami firmly believed that it is out of place for anyone to say that the Nigerian Judiciary is not independent, hinting that they are fully independent.

Meanwhile, Justice  Tanko Muhammed, is of a contrary view, but said that there is no doubt of the future of Nigerian Judiciary been bright.   “For the judiciary under our watch, I can assure you that, by the grace of God, the future looks bright, even though as some may see it as a mere assertion or bleak”.

The CJN further stressed, “Since my appointment as Chief Justice my focus has been on reinventing our processes, providing a speedy and quality administration of justice, strengthening our structures from the Supreme Court to other courts and stamping out corruption from  the system.” The judiciary under him was embracing technology to fast-track its processes, Supreme Court and Court of Appeal Justices had forgone their annual vacation this year to clear the backlog of “time-sensitive cases”

The leader of the Nigerian legal Institution, advised Lawyers to desist from filling appeals that holds no water at the Court of Appeal and Supreme Court, noting that the Apex court would soon deal decisively with abusers of court proceeding, the judiciary would not lose its firm grip on the mantle of honesty, transparency and integrity. “Let me assure this assembly; we don’t look at anybody’s face or feelings before taking our decisions”. “If there is any deity to be feared, that deity is the Almighty God. We will never be subservient to anybody, no matter how highly placed. “If you say that I am independent, but in a way whether I like it or not, I have to go and bend down, asking (for funds) I have lost my independence”

Conclusively, the CJN  admitted that the judiciary was not truly independent,  especially  in the  states, because  the executive  was in  control of its funding

On his part, Malami who represented President Muhammadu Buhari, declared the conference open said that  Buhari’s administration had ensured the independence of the judiciary, saying that Buhari led government is  not dictating to the judiciary, because most judgments against Federal Government was accepted without any prejudice or questions.

The minister reiterated that FG is only committed to strengthening institutions in the country. “We have had to disrupt the age-long wrong assumptions and historical narratives of the presumed immunity of sacred cows in our society,  simply to demonstrate that henceforth the law will be used as a potent instrument to regulate the activities of all persons and institutions in our country in a fair and transparent manner.” However, Malami stressed that FG ‘s intention to probe the circumstances surrounding the failed power project leading to $9bn arbitration award against Nigeria in favour of a British firm, P&ID. , “It is a sad testimony to potential for national economic disaster when legal issues are handled ether in a compromised, ignorant or incompetent manner.

“Let me inform that without prejudice to our right to challenge this award,  Mr President has already directed the Office of the Attorney General of the Federation and Minister of Justice  to ensure that all issues related to the  negotiations, signing, formation and obvious frustration of the purported contract are duly investigated and all persons and institutions, whether in the private or public sector, who acted in ways that have now caused our dear nation a potential economic adversity and widespread opprobrium are made to face the law and prosecution in the law court.”

Breaking: Ikogho, suspected scammer in US, is my childhood friend-Keyamo, says, can’t deny him
Previous Post
Editorial: How the late Jawara, ruled Gambia for 24 years and toppled with military coup