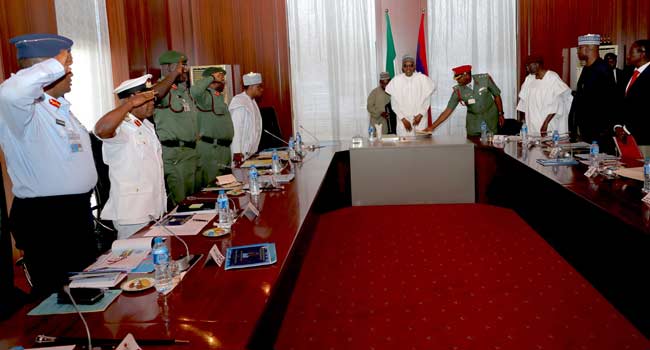 by afrikanwatchngr@gmail.com
-December 15, 2021, News/Comments As bloodbath continues in the country, punch Newspapers captured the statistics of killing majorly from the Northern parts of Nigeria: No fewer than 3,125 innocent persons were killed and 2,703  abducted by bandits in northern Nigeria in the last 11 months, a tally by The PUNCH has shown. The figures were... Read More

As bloodbath continues in the country, punch Newspapers captured the statistics of killing majorly from the Northern parts of Nigeria:

No fewer than 3,125 innocent persons were killed and 2,703  abducted by bandits in northern Nigeria in the last 11 months, a tally by The PUNCH has shown. The figures were obtained from the Nigeria Security Tracker, a project of the Council on Foreign Relations’ an American think tank as well as quarterly reports released by the Kaduna State Government from January to September.

These came to the fore on Monday as prominent Nigerians including the  National President of the Middle Belt, Dr Pogu Bitrus and the Vice President of Northern Christian Association of Nigeria, Rev. Joseph John Hayab, berated the Federal Government over the killings. The PUNCH observed that the most affected states are Kaduna, Zamfara, Sokoto, Katsina, Niger and Borno.

While a no fly zone was imposed on Zamfara State in March, the state in September shut down base stations, cutting off telecommunications across all local governments in order to curb the activities of criminals. Kaduna, Sokoto and Katsina later followed suits, shutting borders and transportation in some affected local government areas.

Of all the states affected, only Kaduna led by Governor Nasir El-Rufai, has been releasing figures of casualties every quarter while reports for other states are obtained from the media. An aggregate by the Kaduna State Government shows that no fewer than 888 people were killed and 2,553 others kidnapped in the state between January and September 2021

A monthly breakdown showed that in January, at least 256 people were killed and 309 abducted by bandits, terrorists and herdsmen in different parts of the North while in February, 338 were murdered and 489 abducted including 317 schoolchildren of Jangebe, Zamfara State.

In March, at least 308 persons were killed in northern Nigeria while 510 were kidnapped. Those abducted included 39 students in Kaduna and 100 miners in Zamfara State. In April, 371 innocent lives were lost in the North while 296 were abducted including 23 students of Greenfield University were snatched.

In May, 404 people were killed by gunmen out of whom 100 were killed in Benue State alone. The number of abductions in the same month in the North was 317 including 208 Niger State students and 40 Muslim worshippers.

The killings occur almost on a daily basis amid failure of the President, Major General Muhammadu  Buhari (retd.) to visit affected communities. But the President has visited at least 10 cities within and outside the country in the last 13 weeks. The latest of his local travels was to Ikeja, Lagos, where he inaugurated a Seaward Defence Boat III built by the Nigerian Navy and attended the book launch of former Osun State Governor, Bisi Akande, last Thursday.

Buhari’s visit to Lagos faced harsh criticisms from Nigerians because it came barely 72 hours after a spike in bandit activities that left a Katsina State Commissioner and at least 23 travellers dead in Sokoto; in separate attacks.

Before Lagos, he was in Dubai, the United Arab Emirates, on December 1, 2021, where he attended the EXPO 2020 Dubai. Dubai is one of ten cities the President visited within 13 weeks. The others are Durban, Paris, Scotland, New York, Riyadh, Mecca and Addis Ababa. A tally by Sunday PUNCH shows that since he took office on May 29, 2015, Buhari has spent approximately 500 days abroad with the UK being his most visited destination mostly for medical reasons.

However,  the Minister of Police Affairs, Maigari Dingyadi, said it was impossible for the President to pay condolence visits to victims. Dingyadi in a chat with BBC Hausa said the killings by the terrorists were too frequent to allow the President visit all the places. “These attacks are happening almost on a daily basis and it is not possible for the president to visit all the places for condolences. And if you send a delegation, it is as if you were there, is all the same,” he said. The minister also said that the security operatives in the country are working tirelessly to checkmate the activities of bandits.

But the Vice President of Northern Christian Association of Nigeria which includes 19 northern States and Abuja,  John Hayab, said it was obvious that Buhari cared more about travelling abroad than caring for his citizens.

He said, “The people and communities under siege by bandits do not have any contribution to make for and in Buhari’s government. That is why he has not deemed it fit to visit those communities.

“His many travels over the world are what his team believes has benefits to his government. This is to show the misplaced priority of this government which makes citizens’ lives worthless and they are being killed like chickens every day. “A responsible government and leader will always show empathy with her subjects and care for them in their moments of pain and sorrow.”

On its part, the Middle Belt Forum Monday lashed out at the President over what it called “ lack of sympathy for victims of attacks in the country” saying that Mr President had abdicated his responsibility to the nation.

The National President of the Middle Belt, Bitrus spoke in an interview with The PUNCH in Jos on Monday. He noted that as a country, Nigeria had continued to derail and deviate farther from the norm of governance under the watch of Buhari. Pogu who condemned the attitude of the President, said, “I think Mr President has lost touch with the people. If it were to be in other sane climes, that issue (killing of travellers in Sokoto) would have been a national issue enough to compel the leader of that country to visit the place and also take drastic action to forestall a reoccurrence. But here in Nigeria, that primary responsibility of the government which is security and welfare of the people is totally absent.”

ISPRM Award of Fellow : Yabatech Rector, Omokungbe, Ndakara, Ovba ,other, honoured
Previous Post
We should be grateful to Pres. Buhari for not allowing Boko Haram to declare Islamic State in the Country-Lai Mohammed