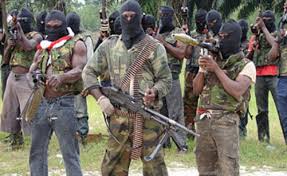 by afrikanwatchngr@gmail.com
December 31, 2019, news/comments With President Muhammadu Buhari proposing to reorganize the governing Board of the Niger Delta Development Commission, NDDC, has thrown in a new challenge as Niger Delta militants threaten that if caution is not taken, then, federal government may risk another crisis in the region. They warned last night that dangers await... Read More

With President Muhammadu Buhari proposing to reorganize the governing Board of the Niger Delta Development Commission, NDDC, has thrown in a new challenge as Niger Delta militants threaten that if caution is not taken, then, federal government may risk another crisis in the region. They warned last night that dangers await and possible way of returning to the creek is near if  Mr. Buhari fails to inaugurate the Board already screened and approved by the Senate,  since forensic audit of the Commission has been done, and wondering why the board is yet to take off, reiterating further that anything contrary to what the senate has approved will attract negative impact in the region.

In a statement by the Leader of group, General Izon Ebi under the 21st Century Youths for Niger Delta and Agitators with Conscience, said, “Anything short of the already screened and confirmed board will result in anarchy, thereby giving us no choice but to go back to the creeks and fight for our rights until justice is restored.”

The militants stated, “We want Mr President to respect the decision of the Senate and immediately inaugurate the already screened and confirmed board because the National Assembly is the true representative of all Nigerians and as such is seen as the true symbol of our democratic process since we are practicing democracy and not autocracy or a military regime.”

“We believe in fighting for our right, the truth, justice and equity than to accept peace of the grave yard. It is heart breaking and disgusting that our youths are now hoodwinked to become enemies of their people and their region, rather than agitating for the wellbeing of their and close people and the economic benefits of the Niger Delta region.

“We are not going to fold our arms our eyes to allow illegality, oppression, criminality and political buccaneers have their way in the Niger Delta anymore. Mr. President should allow peace reign “We, therefore, call on Mr. President to allow peace to reign by respecting the rule of law and separation of power and the will of the Niger Delta people and do the right thing,”

“Our wish this New Year is for a thorough audit and probe of the NDDC that will be encompassing, holistic and transparent, devoid of political affiliations and witch hunt, but to truly bring to book the thieves, selfish and wicked leaders that have no conscience but ride on the excruciating hardship, pains and the unfortunate plight of the good and patient people of the Niger Delta to justice.

“After which, government should immediately inaugurate the duly composed, screened and confirmed board to hit the ground rolling because there is too much hardship and frustration in the land.

“Our desire as the 21st Century Youths of the Niger Delta and Agitators with Conscience in this New Year, 2020 is for permanent peace, development and prosperity of the niger Delta region and its people with its God- given resources that sustain almost 200million Nigerians and the Nigerian nation”

“We, therefore, call on President Muhammadu Buhari to immediately inaugurate the already screened and confirmed board of NDDC after the conclusion of the forensic audit and probe of the Commission to hit the ground running.

“We are not going to accept peace of the graveyard, while we note Mr President’s  recent decision on the already screened and approved board that is being applauded by sycophants, we are not gullible and myopic or among the so- called lazy youths because we are educated, sincere, fearless with our conscience alive in our agitations.

“We do not want to believe that the audit and probe of the NDDC is another gimmick and political strategy to witch hunt, muzzle, indict and force our leaders into submission, if not, why will the President use the statement reconstituting of a board duly nominated, screened and confirmed by the Senate.

“And the same board will not be allowed to swing into action to supervise the audit and probe of the commission?

“The statement by Minister of Niger Delta Affairs, Senator Godswill Akpabio that the probe will take four months is not acceptable by us. Since the proclamation of this audit and probe, it has been motion without movement, everything pertaining to development is stagnant.

“Niger Deltans are in excruciating hardship and pain and are not prepared to experience such in this New Year. Our question is if Madam Joy Nunieh, a member of the same board that was forwarded by Mr. President to the Senate more competent, sincere, educated and upright than other distinguished members?

“We want to tell Senator Akpabio that we are not against his person and personality, but we are against his recent actions and utterances. If he truly means well and respects the people of Niger Delta, he should truly seek their cooperation, support and respect as a leader,” they stressed.