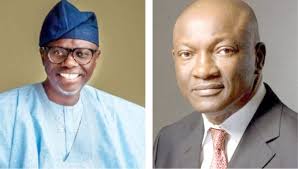 Ibos did not endorse Sanwo-Olu, it is a total scam-CCN, pushes for the suspension of Lagos Ohanaeze Ndigbo’s chairman

by afrikanwatchngr@gmail.com
By Daniel Njienue, March 6, 2019, news/comments A press statement made available to Afrikanwatch indicates that the current endorsement of the All Progressive Congress, APC, of Lagos State, Mr. Babajide Sanwo-Olu by the Lagos State chapter of Ohanaeze Ndigbo’s chairman, Chief Solomon Ogbonna, has been stripped naked, and described by a group of Concerned Citizens... Read More

A press statement made available to Afrikanwatch indicates that the current endorsement of the All Progressive Congress, APC, of Lagos State, Mr. Babajide Sanwo-Olu by the Lagos State chapter of Ohanaeze Ndigbo’s chairman, Chief Solomon Ogbonna, has been stripped naked, and described by a group of Concerned Citizens of Ndigbo (CCN), as a total scam that do not represent the conscience of Ndigbo in the state, thereby asking Ndigbo to disregard such endorsement and call for the removal of the chairman, whom they described as greedy and selfish. The press statement released by the spokesperson of the group, Ben Akah, yesterday said:

“We just want to let people know that what has happened in the past few days is what we call a scam. The President General of Ohanaeze Ndigbo, Chief Nnia Nwodo had earlier declared that the policy of the Peoples Democratic Party, PDP, that is hinged on restructuring is welcomed by the Igbo race, that power should be devolved to the various units.”

The group also said: “We also want the space to be open for people to prosper, individual businesses to rise so that poverty can be chased away, because the policies of PDP were consistent with the aspirations of Ndigbo in general. Stemming from this, the Ime-obi council under Nwodo took a decision that in this particular election, the Igbo race will support the PDP.”

“And he didn’t make any pretense about it as he announced it to the world. “But in the past few days, Chief Solomon Ogbonna, who unfortunately has been running around the APC candidate, Sanwo Olu. That informs the first outing he had with him at the National stadium where he conferred a chieftaincy title on him and also a meeting where he said that Ndigbo in Lagos had endorsed Sanwo-Olu. ‘’The said meeting was called by him for all Ohanaeze stakeholders and he never mentioned anything like inviting Sanwo-Olu. He never mentioned that it was a political meeting and Sanwo- Olu was coming to address Ndigbo. Everybody that attended the meeting was baffled to see the meeting turn out as a political gathering rather than stakeholders’ meeting”

“Therefore, Chief Solomon Ogbonna should be called to order. He should refrain from doing anything contrary to the interest of Ndigbo in Lagos.’ We are Igbo citizens, leaders of thought and people of interest in Ohaneze. We are also people who protect the Igbo interest in Lagos, who are interested in promoting harmonious living with our hosts. We are not a faction of any Igbo group or Ohaneze. We are aggrieved that Ohanaeze Lagos has misdirected the interest of Igbo people in Lagos.’’ In addition, Dr Vincent Anigor said, we are not happy and even the Ohaneze Secretary General is not happy that he used his name to hold a town hall meeting and convening a town hall meeting is not wrong but he politicized the meeting, brought a governorship candidate, and asked him to address the people. He want and hired some women and paid them to sing a praise song for him. It all happened because he set out for his personal interest.”
Leaders of the group present during the press release include Dr. Jonathan Nnaji, Dr. Vincent Anyigor, Chief Arthur Nwachukwu and others.