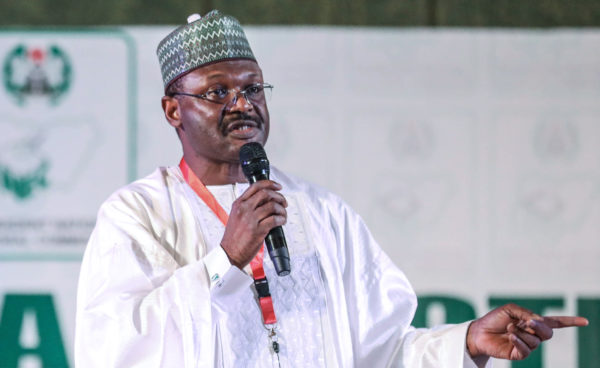 Building a Gimbal in Rust: An Introduction

ABUJA-The chairman of Independent National Electoral Commission, INEC, Prof. Mahmood Yakubu  has given a strong warming to politicians planning to force Resident Electoral Commissioner  to declare them winner  ahead of tomorrow’s governorship and state House of  Assemblies election ,noting that holding INEC staff to compromise standard is a bad omen to the commission’s relentless efforts in giving Nigerians free, fair and credible election. He made this known at the meeting of Inter-Agency Consultative Committee on Election Security (ICCES) ahead of Saturday’s elections. The briefing which was held at the commission’s headquarters on Thursday 7, in Abuja witnessed various stakeholders, while the INEC boss condemned the abduction of the commission’s staff, stressing that where such repeat itself, Certificate of Return would not be issued

Yakubu said that the commission was disturbed over the rate of attacks on its personnel and the loss of lives and election materials recorded during the Feb. 23 Presidential and National Assembly elections. His words:

“The Commission is concerned that many of our materials, including ballot boxes, voting cubicles, voters’ registers and Smart Card Readers were lost to acts of hooliganism and thuggery in the elections held two weeks ago”

“Most worrisome is the attack on electoral officials. Some of our staff were abducted and taken hostage in an attempt to disrupt elections or influence the outcome. “In fact, some of the supplementary elections I referred to earlier were caused by such acts of thuggery.”

“I am confident that working together with the security agencies, we will consolidate on the largely peaceful conduct of the Presidential and National Assembly elections while also taking decisive steps to deal with the minority of violators intent on disrupting the conduct of peaceful elections. “However, the Commission will not tolerate the act of holding our officials hostage and forcing them to declare winners under duress. “Where such occurs, the Commission will not reward bad behaviour by issuing them Certificates of Return.’’

“The Commission’s appreciation to the security agencies for securing the environment during the national elections.. “On behalf of the Commission, I extend our deepest condolence to the families of those who lost their lives, including personnel of the security agencies. We are glad that the Police has made several arrests and investigation is ongoing. “I wish to assure Nigerians that the Commission will work closely with the Police to ensure the diligent prosecution of all violators of our electoral laws.