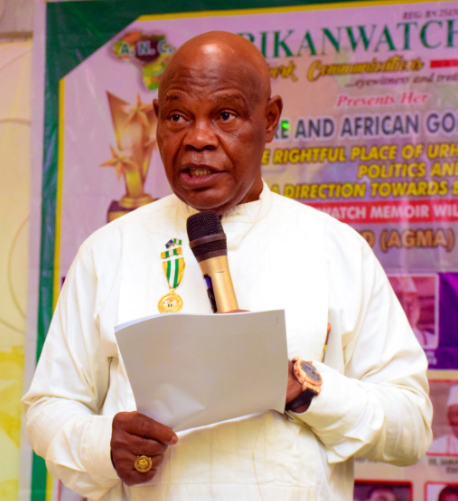 by afrikanwatchngr@gmail.com
By Chidera Eke Faith, News/Comments, October 19, 2022 WARRI-Detailed insights on how former  President Goodluck Jonathan and his ally worked against all Urhobo Governorship candidates  in Delta State in previous election and insisted on Dr. Emmanual Uduagha, former Governor of the state,  emerged through a former medical director of the Military Hospital, Ikoyi, Lagos, General... Read More

WARRI-Detailed insights on how former  President Goodluck Jonathan and his ally worked against all Urhobo Governorship candidates  in Delta State in previous election and insisted on Dr. Emmanual Uduagha, former Governor of the state,  emerged through a former medical director of the Military Hospital, Ikoyi, Lagos, General Oviemo Ovadje (rtd), who traced back how the Urhobos have suffered politically after the military coup that removed the late Olorogun Felix Ibru by the late former Head of State, Gen. Sani Abacha.

“When the country returned to a democratic rule, that an Urhobo man was elected, not by appointment. That was when Olorogun Felix Ibru became the first executive governor of Delta in 1992 and he was sacked during the military junta led by late General Sani Abacha. He removed all civilian governors in a bloodless coup on November 17 1993, until 1999.  From 1993-1999, Military administrators were installed, and Urhobos were not politically lucky” 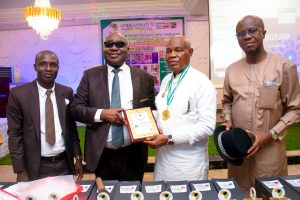 ‘Miraculously, Nigeria returned to a true democratic rule in 1999, and an Urhobo Man, Chief James Onanefe Ibori, the Odidigbodigbo was democratically elected as the Executive governor of the state, and till date, his records in terms of development and infrastructure remains the best. After him, for equity and justice, Okowa would have been the next governor but due to political manipulation, Dr. Emmanuel Uduaghan, Ibori’s cousin got it. Chief David Edevbie was thrown out; why, because of the anti Urhobo factor, and that bad symptom is still there with us. The then President Goodluck Jonathan representing the Ijaw Nation was pressured to back Uduaghan against those of us from the Urhobo land. At that time, Ovie Omo-Agege would have also had a better chance of becoming the governor. I was one of the five Urhobos mustered to fight Dr. Uduaghan. Again we lost out. We will always lose out if we give them the chance again”

Oviemo, a medical doctor and internationally acclaimed Nigeria Army inventor of  Emergency Auto Blood transfusion set, (EATSET), a system for recovering blood from internal bleeding, applicable for patients with internal haemorrhage also recalled how Abacha supported his research work with almost $100,000, through a half Urhobo and half Ijaw senior military general while noting that, he cannot but appreciate Northern leadership that promoted his career compared to his southern colleagues who were jealous, even as he revealed the support of a former head of state, Gen. Abdulsalami Abubakar.

“General Abdusalami did not only nominate me Chief of Delegates at the World Congress of Military Surgeons but supported my research with 200,000 USD. Without dabbling into the politics of Hausa Fulani and the rest of Nigeria, I want to say that Urhobos did better under their regime than with our Yoruba and Ibo leaders, Urhobos fared better under General Tafawa Balewa. For example, An Urhobo man late Chief Jabin Obahor signed the Nigerian pound which is now the prerequisite of the Governor of CBN today.

“As an officer in the army, I could not speak Urhobo with an Urhobo General who spoke Hausa with an ordinary soldier from the North. I voluntarily resigned from the army when Urhobo, Isoko, Ijaws headed the Army. One reported me to the late General Malu that I was using the army time to make money abroad. One came to my house in Ikoyi when he asked me if I was the owner of the house.  He screamed “impossible” 3times.

On the 2023, the General stressed that Nigeria needs competence not sycophants.  “The truth is that, we need a government to be headed by a man whose antecedent is well known such as Peter Obi, he was close to my house here in Southern Sun hotel, and there was no police, no soldier around the house. I hear him say that he wants to be president of Nigeria not for his own personal reason but he is in the race to save and help Nigeria. That is the kind of a man we are looking for. Not like the other people who are not willing to die for Nigeria. We need leaders that can sacrifice for Nigeria and notable Urhobo men have positioned themselves for the 2023 Governorship race, such as Sen. Omo-Agege, Chief David Edevbie, Sherriff Oborevwori, all of whom  are eminently qualified”

Ovadje spoke at the 11th Afrikanwatch Network lecture  at Meritorium Event Centre, Warri, Delta state last weekend on a theme, The Rightful place of Urhobo Nation in National Politics and Economy… a direction towards building viable bridges ,as he paid tributes to the founding fathers of Urhobo Nation. The event was chaired by Prof. Rim-Rukeh Akpofure, Vice Chancellor, Federal University of Petrolum Resources, Effurun, as Prof. Fred Opute was the father of the day, who noted that there is strength in diversity and unity of purpose. At the event,  eminent Urhobos were awarded with Gold Merit award for their contributions to the Urhobo Nation. Meanwhile, the Editor-in-Chief of news outfit, Mark Orgu said, the essence of the event is to chat a better course for the Urhobos.