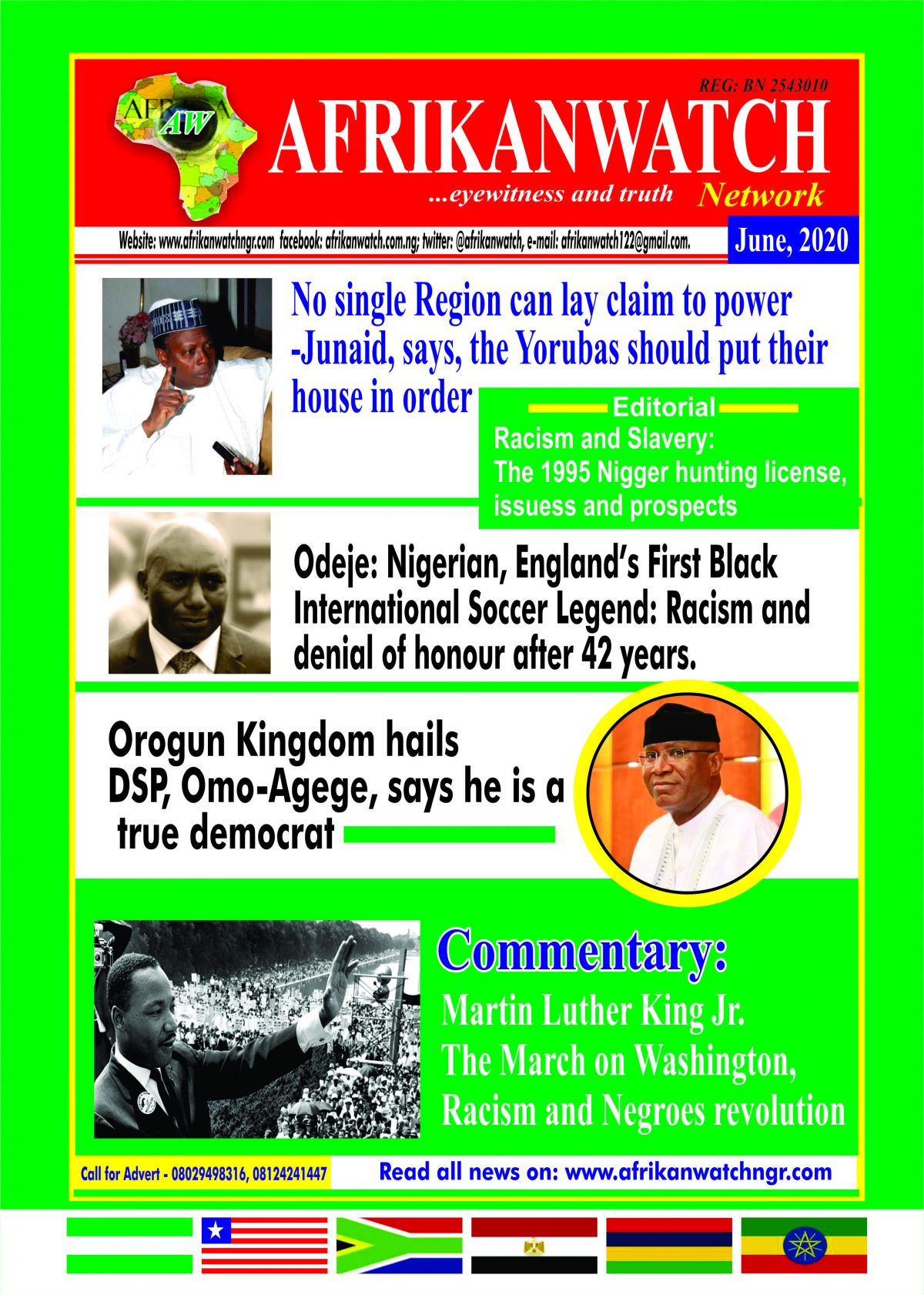 by afrikanwatchngr@gmail.com
By Daniel Njienue, News/Comments, June 16, 2020. With the current word of war between the Presidency and the Northern Elders Forum’s claim of President Muhammadu Buhari’s failure to protect lives and properties in the country, especially banditry taking another shape in the northern part, are the worries of various Northern groups, who have issued a... Read More

A US-Nigerian entrepreneur hails Omo-Agege, over court ruling on an allegation, says, light is stronger than darkness

With the current word of war between the Presidency and the Northern Elders Forum’s claim of President Muhammadu Buhari’s failure to protect lives and properties in the country, especially banditry taking another shape in the northern part, are the worries of various Northern groups, who have issued a fresh statement, accusing the Special Adviser to the President on Media and Publicity, Femi Adesina, of being reckless in his response to the claim of the Forum. Accusing Adesina of insensitivity to the plight of national issues and interest.  Reminding him that the Forum considered President Buhari’s administration as a failure. It could be recalled that the Presidency through the Special Media Adviser had described the NEF’s action in recent time as a General without troops. Meanwhile, in a press release sent to Afrikanwatch Network last night, signed by Abdul-Azeez Suleiman, who is the Spokesperson of the groups, wonder why Adesina has descended so low in defending the indefensible. The statement further read: “The Coalition of Northern Groups is shocked at the contemptuous, irresponsible and lazy response of the presidency through Femi Adesina, to the patriotic representation of the Northern Elders Forum (NEF), inviting attention to the failure of President Muhammadu Buhari to preserve the lives and properties of Northerners.

First, Adesina was so lazy in his response that he barely changed a word from his response to a statement released by the same NEF in February this year, correctly warning that President Buhari’s attitude to security and poverty in the North could get worse. On both occasions, Adesina had said the NEF was a bunch of irrelevant people led by Professor Ango Abdullahi, a general without an army”.

“This of course, to every discerning mind, only exposes Adesina’s hypocritical inconsistency by deliberately ridiculing his master, the President, in the guise of protecting his interest. The peak of betrayal is where Adesina referred to Professor Abdullahi as a “general without troops” whereas, he only meant to mock Buhari as “an ineffective general commanding large troops and a state mandate but failing to save the people he leads from what he once personally labelled,” ragtag army.” What Adesina fell short of mentioning was perhaps that his boss though actually in the army and rose to the rank of Major General, was in the real sense not in any combat unit of the military; rather he served throughout in the S and T unit involved with store keeping, and catering services which perhaps explains the apparent inability to manage even the home front”

Continuing, the statement further noted that,  Adesina did not utter one word to address the substance of the statements of NEF issued in February this year, or to prove that the NEF is not expressing the genuine grievances of Northerners. “Typical of the crowd around the old general, Adesina could not exempt the administration of the facts laid out by the Northern Elders beyond irresponsible, clumsy and indecorous gaffes devoid of the true essence of the matter. Secondly, Adesina, in a desperate haste to defend the indefensible, only succeeded in exposing himself as an ethnic bigot with an endemic hatred for other non-Yoruba ethnicities to the point of rejoicing over the killings of innocent northerners due to the incapacity of the government he serves.

Our Coalition is not surprised that Mr Adesina stopped at childish insults because he has nothing with which he can defend the Presidency against the position of the NEF, to wit, that the federal government has lost control over the security of lives and property of Northerners, and Northerners are fed up with being killed by an administration they helped elect. The nation knows the integrity and commitment of members of NEF, the group that had consistently stood for the protection of the interests of Northerners. Adesina’s ignorance in this regard may be tolerated because he works in an environment that puts little store in respecting loyalty and service to the nation.

Adesina’s response is therefore, a sad reminder of the type of people who serve President Buhari. Between their poor service to him and his seeming insistence on retaining liabilities around him, Nigerians do not need to wonder why the North in particular and the country in general are in the state they are. On the same day Mr Adesina released his laughable response, an APC Governor of Katsina, the President’s State was categoric in his admission of the administration’s failure and openly apologised to citizens of the State over their plight, something the Presidency could learn from. Our Coalition salutes members of the NEF, and commends their fearless commitment to the interests of Northerners. We urge them to continue with their plans to mobilize other groups and associations and creating a momentum that should result in relief to the on-going slaughter of our brothers and sisters in the North”.

No single Region can lay claim to power-Junaid, Says, the Yorubas should put their house in order
Previous Post
COMMUNAL CLASH: Ariam-Usaka communities cry out for Government intervention over killings of its citizens