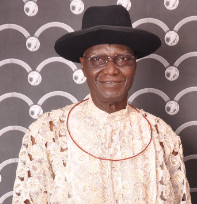 by afrikanwatchngr@gmail.com
“The young William was employed by the shell-BP in 1970 and left shell-BP in 1971 after one year, to study for his HND Electrical/Electronic Engineering at the Yaba college of Technology, Yaba, Lagos. Again, he performed excellently well .This gave him a federal Government scholarship award. Happily, the young William left the college in 1973... Read More

“The young William was employed by the shell-BP in 1970 and left shell-BP in 1971 after one year, to study for his HND Electrical/Electronic Engineering at the Yaba college of Technology, Yaba, Lagos. Again, he performed excellently well .This gave him a federal Government scholarship award. Happily, the young William left the college in 1973 with a distinction, and became the College best overall Academic price winner of the year”

I got to know Engr. William Metieh late 2020 during the compilation of the second edition of my book, Historiography of Orogun. Though, I had requested for his contact through the chairman, Orogun Council of Chiefs, Chief Johnson Akporugo, who also briefed me why I should feature Metieh’s profile and his part in Orogun Kingdom since I was writing about the history of Orogun kingdom. I joyfully accepted. While, I was in Abuja, I gave him a call and he invited me to his office in Abuja and we had discussions fruitfully. It was there, I got to know that, I was dealing with a man of providence, experience, and a technocrat to the core. While we continued as a father and son relationship, it became clear that, he is a man of simplicity, kind hearted and very easy to access. In fact, around last year’s November, he visited me at my Uncle’s residence in Gwarinpa briefly, and it was there, I offered him Afrikanwatch 2021 Memoir. We had discussions on how Nigeria has turned badly into a cemetery, including bad leadership crippling all spheres of the country’s economy and sufferings of the citizens.

Though, I have taken my time to study about Engr. Metieh’s profile and his accomplishment in last six decades as a young boy, adult and septuagenarian. He had studied in the Technical College in 1964 at Sapele where he read Telecommunications, and obtained the city and guilds of London intermediate certificate with distinctions in all six subjects. ln 1969, he proceed to study electrical engineering at the Midwestern technical College ,Auchi (then mid-west region ) where he studied with a shell -BP scholarship as a reward for his brilliant academic performance ,passing out with distinctions and was the best academic student in the electrical department.

Based on his excellent performance on completions of his ordinary National diploma, (OND), he was employed by the shell-BP in 1970 and left shell-BP in 1971 after one year, to study for the HND Electrical/Electronic Engineering at the Yaba college of Technology, Yaba, Lagos. Again, he performed academically well .This gave him a federal Government scholarship award. Happily, the young William left the college in 1973 with a distinction ,and became the College best overall Academic price winner of the year .Engr William Metieh in 1974, further his education as he was admitted into Cranfield Institute of Technology, Cranfield ,England (now Cranfield university) to study industrial control systems with the federal Government of Nigeria (petroleum trust fund) scholarship ,there he studied and researched into multivariable control system and ,in 1976,was admitted into the degree of masters of science (M.S.c) in the control engineering specializing in industrial control. His project work remained a standard laboratory and experimentation equipment at the University for three decade with only few modifications .A tireless academic but locked in the development of Nigerians industrial sector ,William  went back to the University, this time with a British council grant ,in 1986,where he attended yet another world renowned and prestigious institution , the University of Sheffield and studied Glass -to-Metal seals and finding solutions that led to the successful development of modern day energy saving electric bulbs. With this major successful engineering and technological breakthrough, he was admitted into the degree of Master of Technical science (M.S.c tech) in Glass Science and Technology. In 1987.by January, 2010, Engr. Metieh started an online research studies with Walden University, Baltimore ,USA for a doctorate program in Business Administration, specializing in social impact management.

Engr Metieh’s work experience is vast with reward and commendations. From 1970-1971, worked as a production foreman trainee with shell-BP, Ughelli while in 1972, was a pupil engineer with the state ministry of works, Warri as a vocational student. Between 1973-74, he worked as an electronic engineer with Cadbury Nigeria limited Ikeja, Lagos. Others include , field engineer trainee with schlumberger ,Port Harcourt,1977 , Abestos Cement product Nigeria Ltd (now Nigerite, Ikeja) first as production engineer 1977-1978 and later as budget/statistics manger ,after reducing the companies raw material losses, improving productivity ,profitability and quality in just 6 months of being employed .He however exposed the danger of Abestos fibers .

By 1978, he joined Ukpilla cement company, as electrical/instrumentation Engineer because of his conviction and volition to practice his chosen engineering profession to the utmost. Whilst there, he participated in the commissioning of the new cement plant ,working beside the Germans ,one of whom later invited him to Germany because of his proficiency at work .in 1979, he left ukpilla and joined Delta Glass ,Ughelli (part of the Leventis group)as the pioneer Electrical /instrumentation Engineer .In 1982 , he worked as project /Generation Engineer when he set up the first captive independent power project ,a Ruston TB5000 gas turbine of 2.7megawatt for delta glass company ltd That turbine remained functional for more then three decades .later Engr. Metieh served as the pioneer Nigerian plant maintenance manager ,then became the pioneer  Nigerian Engineering Manager, first AGM (Engineering service ) and in 1992 became the first Deputy General manager (operations ).  Between 1991 and 1998, he coordinated the rebuilding of the 140 tonner per day glass furnaces and began the development of Nigerians to take over work usually performed by expatriates.

In November 2001,Engr .Metieh was transferred to Beta Glass PLC, Agbara ,Ogun state as Operations manager ,where he helped with the furnace rebuild project and the commissioning of a four Megawatt captive independent power project (IPP),for the huge glass containers and plastic crates manufacturing complex, with an annual turnover of over N10billion at that time. After only 8 months he was made the pioneer General manager of the P.E.T Division of Frigoglass Industries Nig ltd ,still a part of the leventis group ,where he successfully established the P.E.T bottle blowing plant at NBC Ikeja Lagos state and P.E.T perform manufacturing plant at Ibadan ,Oyo state running the two facilities successfully simultaneously among others as he gloriously bow down in 2009

In 2013 Engr .Metieh was appointed as a senior technical adviser to the presidential tax force on power at the crucial time of the power sector privatization initiative, contributing immensely towards the transfer of the electricity generation and distribution companies to private investors later,in 2014 he joined the Nigerian electricity management services agency (NEMSA)as the senior technical Advisor to the managing director/CEO and chief electrical inspector of the federation till date. In 2020, he helped NEMSA to achieve its quality management system (QMS) ISO 9001:2015 certification. As you celebrate your 70th existence on earth today, may God grant you continuous good health of mind and body, as I wish you, your children, wife and your entire family a joyous celebration