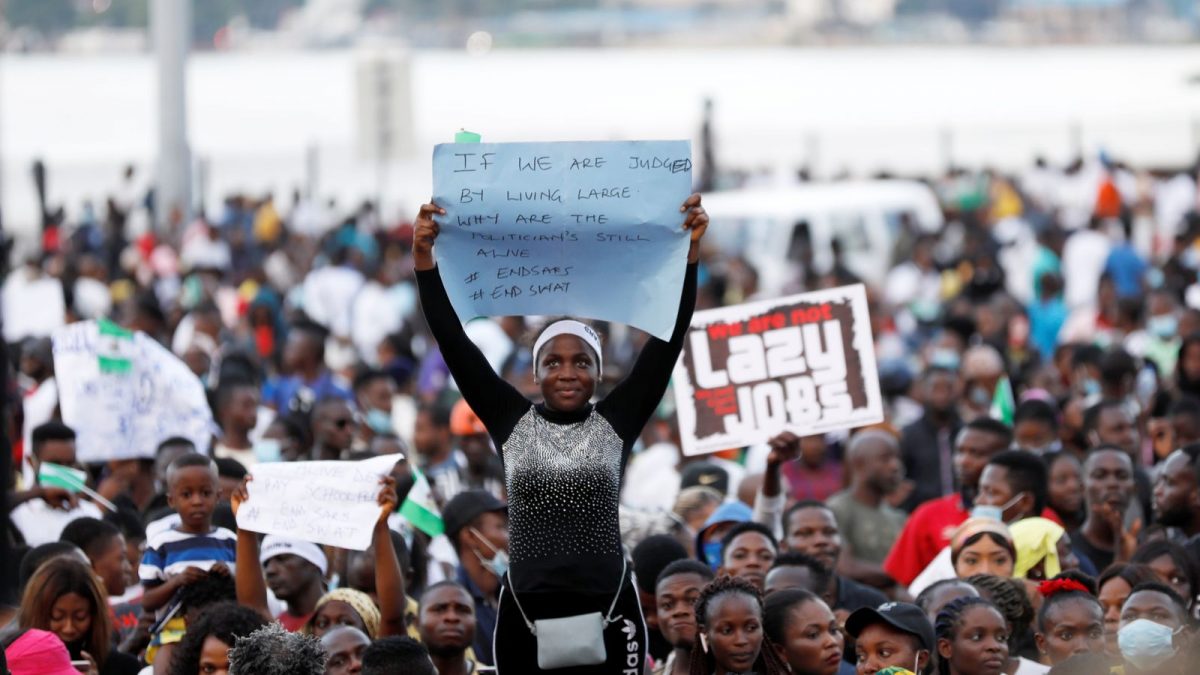 by afrikanwatchngr@gmail.com
-News/Comments, October 21, 2020 In a 3-page commentary, sent to Afrikanwatch Network via whatsapp, by a Catholic Priest, Rev. Fr. (Dr) Chukwuemekalum Nwosuh, a Dominican priest of the Order of Preacher has advised the government of President Muhammadu Buhari, to as a matter of urgency to heed to the demands of the young protesters, who... Read More

In a 3-page commentary, sent to Afrikanwatch Network via whatsapp, by a Catholic Priest, Rev. Fr. (Dr) Chukwuemekalum Nwosuh, a Dominican priest of the Order of Preacher has advised the government of President Muhammadu Buhari, to as a matter of urgency to heed to the demands of the young protesters, who have been robbed and denied of a better living due to bad leadership in the country. His piece titled: The demand for a redefined and restructured country: the ultimate goal of #endsars movement reads:

I am not an historian by training, but from my layman reading and interpretation of key world revolutions, it appears that most revolutions which often begin with simple basic demands often end up achieving far more than what they initially set out to achieve. Perhaps, it may be too early to classify the #ENDSARS movement as a revolution, but it appears to be slowly taking on the character of a revolution, and like all major revolutions, it will eventually go beyond its original demand. It is already evident, because the protests have continued despite the so-called abolition of SARS, which actually turned out to be a naming ceremony by the police. Yes, what IG Abubakar did was a naming ceremony in which SARS was renamed SWAT. Of course, Nigerians were not fooled”

But the IGP’s action and Buhari’s response so far is typical of how rulers respond to revolutions at its onset. They dismiss it with levity and disdain. But it really does not matter because the revolution train continues to gather steam and speed and will not hesitate to crush whatever stands on its tracks. When the French revolution began in 1789 with street protests, King Louis XVI and his wife Antionette, never imagined that they will lose not only their thrones but their heads to the infamous French guillotine. Similarly, the Russian Czar, Nicholas, never imagined that he would lose his imperial authority to a provisional government when the Bolshevik revolution broke out in 1917. Mohammed Reza Shah Pahlavi, the autocratic monarch of Iran was lucky to escape with his life when the Iranian revolution broke out in 1979, but that of course marked, not only the end of his rule, but the end of monarchy in Iran.

He died in exile in France. We can count so many other significant revolutions. What is common to them all, is that they all began as street protests against maybe, the absence of bread, low wages, or one discontent or the other. But eventually, they ended up upturning the entire political system inside out, upside down. The point here is that whatever may be the initial impetus for the protest is only emblematic of years, decades, or even centuries of bottled-up sufferings, pains, anguish, frustrations, despair, etc. That the people have continued to endure blind narcissistic greediness of Nigerian leaders is not an excuse for bad governance.

Although the present street protests began as a protest against SARS, the #ENDSARS protest actually encapsulates the decades of humiliations, frustrations, exploitations, deprivations, brutalities, and destructions the Nigerian State has unleashed on its citizens. The #ENDSARS protest is, therefore, more than just a protest against an internal police unit which harasses, oppresses, tortures, secretly murders and buries many young Nigerians in unmarked shallow graves. It is ultimately a protest against a State which not only oppresses and tortures the citizens of this country with untold hardship, but also buries their hopes and dreams in the shallow graves of the voracious greed of the political class. SARS officers, or rather thugs, who rape and kill with reckless arrogance and impunity are reflective of the Nigerian State and its rulers who for decades have brutalized and rapaciously raped the youths and entire citizens of Nigeria with unbridled arrogance and impunity.

Therefore, the #ENDSARS protest is far more than just a protest against a pernicious and vile police outfit. It is ultimately a protest against the Nigerian State and its arrogant, reckless, soulless, and vicious rulers or rather misleaders. The #ENDSARS protest is ultimately a protest against a State that destroys and consumes its own youths. Just like SARS do.  The Nigerian State and its political class are only capable of one thing: cutting short the lives and dreams of young people. This is why we all must understand that the #ENDSARS movement is far more than just scrapping SARS. It is ultimately a quest to scrap Nigeria as presently constituted. By doing so, we also will be scrapping out the political class that has always acted no differently than the SARS hoodlums.

Understood, therefore, as a protest against a fatally structured State that cannot permit Nigerians to live in peace, dignity and freedom; and to thrive and realize their hopes and aspirations, it means that the demands of the #ENDSARS movement cannot be met even by restructuring the entire police force. The only action that can meet the goals of the #ENDSARS movement is to completely overhaul the Nigeria State. Overhauling the entire Nigerian structure will inexorably require the overhauling of all its organs and agencies, such as the police force. And so, the #ENDSARS protest movement is nothing other than a demand for a New Nigeria.

Now for this to happen, the present government of General Mohammadu Buhari must give way to a Government of National Unity (GNU) which shall within, six months of its inauguration, convene a National Sovereign Conference (NSC) that will redefine and restructure Nigeria under a new constitution that will be ratified by the people through a national referendum. Yes, Buhari and his government should resign. All the governors should also resign and give way to civilian administrators. All the legislative houses both at the Federal and State levels should be scrapped until a new constitution is put in place. Our legislative assemblies are nothing but covens of wastepipes that continually drain away the resources of the country while further impoverishing the already impoverished youths and citizens of Nigerians.

Does this sound unrealistic or utopian? Not if we all stand together and resolve to end this structure that only enslaves and destroys. Time has come for the rest of us to leave our comfort zone and join the youths in ensuring that we bring down this structure that has held us in slavery for decades. We must understand that this protest is not for the youths alone. This protest is for every Nigerian that has ever lived, living, and will ever live. This protest is for those numerous young Nigerians who died in the hot and arid desert of the Sahara while fleeing the hell that ought to be a home in search of greener pastures.

The protest is also in honor of the unknown number of young men and women who drowned in the Mediterranean Sea in pursuit of a better future abroad. This protest is about the numerous young Nigerians who are forced to live like outlaws in foreign countries because they have no valid papers despite having succeeded in surviving the horrors involved in crossing the desert and deep sea. This protest is equally about so many of our young men and women who have been forced into a life of crime, both violent and non-violent because that appeared to be the only possible means of survival. The #ENDSARS protest is about many of our young girls who, in their bid to escape poverty and to contribute to the upkeep of their impoverished families, have lost their freedom, dignity, humanity, and the possibility of ever having a home and a family of their own because they have been sold off as sex slaves by sons of Lucifer who deceived them with false hopes of better jobs in Europe and Arab countries.

This protest is also, indeed, about the countless young men and women, including underage children, who toil daily under the intense heat of the African sun, hawking on the dusty streets and highways of our beleaguered country. #ENDSARS protest is also about the unborn generations whose lives and dreams risk also being crushed like that of today’s protesting youths just like the dreams and hopes of their own parents had also been crushed and flushed down the political sewage dug and managed by our insatiable greedy politicians. The protest is about so many retired workers who live in penury even after years of dedicated hard work to a country which has been structured to feed the ever protruding and flatulent bellies of our politicians whose only credentials are their ability to grab power either through the barrel of a gun or political thuggery and violent manipulation of votes. Many of these pensioners died in complete penury even without getting the benefits of their years of hard work.

The protest is about a callous system that heavily penalizes integrity, excellence, and hard work, while institutionalizing corruption, laziness, and mediocrity. This protest is also about all mothers and women who daily undertake back-breaking works in order to feed their hungry family, while our militicians and politicians who sit in the State houses, and in the red and green chambers ferry away billions of naira as salaries and allowances only because they have mastered the art of sophistry and political manipulation. The #ENDSARS protest also includes millions of Nigerians who have been driven away from their ancestral homes and abandoned by a government who has continuously failed to offer them any protection from the fangs of invading terrorists. The protest is against a State which has on all accounts failed the youths and specializes in constantly humiliating and impoverishing its citizens. Indeed, the list is endless.

And so, this protest is not just about ending the cycle of gruesome violence against the youths by members of SARS, but it is about the countless cycle of violence, injustice, and dehumanization of the ordinary citizens of this country oftentimes perpetrated by the political ruling class and their cronies. These countless issues cannot be resolved by some cosmetic reforms here and there. The underlying issues require a radical approach, which this government completely lacks the character, capacity, and competence to handle. It is, therefore, imperative that it steps aside and allow for a Government of National Unity, which will convoke a National Sovereign Conference that will radically address the underlying issues that are threating to consume this country in a conflagration that will leave everyone badly bruised and traumatized. It would have been to the eternal credit of this government if it recognizes that the tide is changing and hence, cannot continue to carry on as usual. But judging from the poor character and low intellectual acuity of constituents of this government, they are incapable of any critical perception. In their arrogance, they will only resort to the logic of violence which appears to be the only thing they are capable of. But calling out soldiers to take the protesters off the streets will further add more pressure into an already pressurized situation. What will that result into? May God save us all”

Watching and waiting: It is time to adopt Mao Tse-Tung’s justification of good governance-Editorial
Previous Post
President Buhari’s address: It Was A Military Riot Act-Ozekhome, SAN, says, he spoke like an Emperor