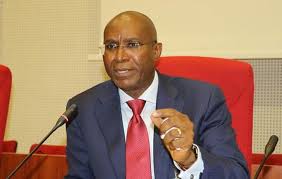 DSP, Omo-Agege And The Grace Beyond Measure: What Posterity Holds-COMMENTARY

by afrikanwatchngr@gmail.com
“Going forward, the political permutations in Delta State should, and ought to be about, who has a better record and outstanding delivery of public service to run on to bail Delta State from its economic woes, underdevelopment, and failed policies. If that is the question, Omo-Agege is befitting and graced beyond measure”  By Felix O.... Read More

“Going forward, the political permutations in Delta State should, and ought to be about, who has a better record and outstanding delivery of public service to run on to bail Delta State from its economic woes, underdevelopment, and failed policies. If that is the question, Omo-Agege is befitting and graced beyond measure”

In my opinion, the state of development in Delta State is begging for better ideas. Delta State should be comparable to the most developed amongst States in Nigeria. In terms of comparative development, Delta State has little or nothing to show for its enormous fiscal allocations from the federation account and natural resources. Beyond the misplaced twaddle amongst the Peoples Democratic Party on who should be the political crown prince of the current Governor and with little or no record to run on, it is indubitable that there is a clamor for change built on a powerful yearning for a productive, practical, and strategic political direction.

The economic development of Delta State has been limited in the most important indexes of development and good governance. For example, compared to States like Lagos, Rivers, and Akwa Ibom, road projects have been largely cosmetic and poorly executed, there is abysmal and poor waste management system in major cities, limited policy on agricultural development, the Asaba airport was built with public funds and mortgaged to cheat Deltans in the most bizarre circumstances and the Warri airport left to die in economic coma. In addition, there is absence of any substantial policy on rural electrification, limited access to primary healthcare in remote cities and communities, inactive local government system, absence of public accountability by all levels of the state government, appalling failure to partner with the Federal Government to reinvigorate seaports located in Delta State. Instead, the State government has promoted nepotistic politics focused on entitlement and vindictive demagoguery with reckless abandon for many years.

It is against this background that Senator Ovie Omo-Agege, the Deputy President of the Senate (DSP), Senator representing Delta State Central senatorial district, is a public servant that is graced beyond measure on matters of public policy, effective representation, and good governance. Omo-Agege, has a track record and incredible achievements in just two years as DSP and the Senator representing Delta Central senatorial district. On assumption of office, Omo-Agege, made a commitment to give a periodic public account of his stewardship at the Senate to his constituents. Premised on the notion that, there can be no accountability without access to elected representatives and the opportunity to speak truth to power, the DSP directed that an objective yearly account of his public service and leadership at the Senate be made available to the people of Delta Central and the public.

Based on anecdotal evidence gleaned from National Assembly records, Omo-Agege holds the record as the most productive Senator elected by Delta Central on core legislative duties, constituency projects, and strategic political engagements. During the second year of his tenure as DSP and Senator representing Delta Central, Omo-Agege secured, facilitated, influenced, and executed more than 75 electrification projects and successfully pursued the Federal Government approval for the establishment of 1.3 megawatts solar hybrid power plant at the Federal University of Petroleum Resources, Ugbomro, Delta State. This was in addition to facilitating the laying of the foundation for the construction of NDPHC/NIPPS injection substation to improve power supply to Orogun town and environs.

These verifiable projects were cited and spread across every local government area of Delta Central benefitting other senatorial district because of its multiplier effects and economies of scale. Rural electrification as a process of connecting electricity to rural and remote communities, is a major development issue in Delta State. In many instances, the national grid fell short of electricity demands. With the policy and economic understanding that improved electricity supply will enrich agriculture, enhance communication, and create employment for farmers, women, and youth, Omo-Agege addressed the issue substantially to the advantage of Delta State.

As a matter of policy and economic development in Delta Central and Delta State, Omo-Agege believes that an improved access to clean, safe, and reliable water system in Delta Central will make Delta State an attractive destination for critical public and private infrastructure and investments. It will also improve agriculture, healthcare, and sanitary solutions. There are many communities that have been neglected by the State government on this problem to the detriment of economic growth and progress. One can imagine the effect of the dire need in communities that rely on unsafe sources of water. The DSP took up this issue as a matter of urgency for Delta Central. Consequently, on his second year alone, Omo-Agege through the performance his core legislative duties, executed more than 18 safe water projects to expand access to clean water in Delta Central.

In just his second year in office, the DSP’s legislative agenda dug deeper into educational development in Delta State that focused on the extension and expansion of technical education in Delta State. The overall idea is to pursue policies and design academic programs that will equip Deltans and other Nigerians with the best tools that will spur innovations in science, business, and technology that can help meet the challenges of economic development primarily in Delta State. To bring this goal into fruition, one of the most significant record of the DSP in his second year in office is successfully pursuing the approval of the Presidency for the take off and commencement of studies at the Federal Polytechnic, Orogun in October 2022. The citing of a Federal Polytechnic in Delta Central is a major development milestone, for which the social and economic advantages for Delta State cannot be overemphasized. Recall that during the DSP’s first year in office, he initiated and sponsored the Bill for the establishment of the Federal Polytechnic at Orogun, Delta State.

In addition to the incredible record of assisting to cite a Federal Polytechnic in Delta Central, the DSP also influenced and executed over 18 remarkable educational and ICT infrastructure in schools across Delta State. These projects include construction of blocks of new and renovated classrooms, ultra-modern ICT infrastructure, provision of desks, computers, and sports equipment to facilitate learning in schools. To enlarge access to primary healthcare, the DSP facilitated the provision and installation of Dental and Opthalmological equipment to Mariere Memorial Central Hospital in Ughelli and the construction of a primary healthcare center at Omavovwe-Agbaraha, both in Delta Central. On human capital development and economic empowerment, the DSP successfully recommended the employment of Deltans from all senatorial districts as political aides, into boards of federal parastatals, governing councils of tertiary institutions, ambassadorial, and key political positions. Focusing on women and youths on his economic empowerment initiative, the DSP facilitated the provision of hundreds of motorbikes, tricycles, sewing, and grinding machines. This was in addition to sponsoring Deltans for federal intervention programs including loans, grants, establishment of SMEs and skills acquisition training.

The most visible legislative activity of the DSP yet, is the DSP’s appointment by his peers as the Chairman of the Senate Committee for the Review of the 1999 Constitution(“CRC”). Coordinating the submission of over 250 memoranda on the thematic areas of the exercise, the determination of the DSP is to give all Nigerians a fair shot to participate in the process to produce a constitution that will work and be satisfactory to all Nigerians. The DSP’s approach to this assignment, lies in his belief that constitutional amendment is a fundamental principle of constitutionalism in the context of a participatory democracy. While assuring Nigerians that the Senate will not use the exercise and the process to kill any of the pending Constitution alteration Bills at the National Assembly, the DSP reports that under his leadership, the CRC will critically review the memoranda that were submitted to the CRC. The CRC on schedule to have a vote on each of the proposed Bills for the amendment of the Constitution before the Senate proceeds on its long recess in July 2021.

With a track record of extraordinary legislative achievements and rising political torrent in just two years as DSP and the Senator representing Delta Central, Omo-Agege has demonstrated what is possible through effective and accountable public service. Going forward, the political permutations in Delta State should, and ought to be about, who has a better record and outstanding delivery of public service to run on to bail Delta State from its economic woes, underdevelopment, and failed policies. If that is the question, Omo-Agege is befitting and graced beyond measure.

Dr. Okpe is a lawyer and Senior Special Assistant to the Deputy President of the Senate, wrote from Abuja.