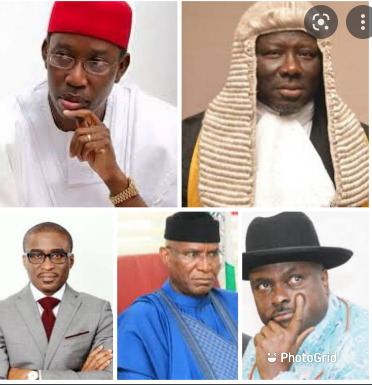 by afrikanwatchngr@gmail.com
“How can UPU become so indiscretive not to trade with caution that, their roles should be that of  elder statesman and father to all Urhobos. Now, shame and fear has caught up with them. I dey laugh. But in all, Edevbie should be grateful to Okowa and the PDP, having served the state for eight... Read More

“How can UPU become so indiscretive not to trade with caution that, their roles should be that of  elder statesman and father to all Urhobos. Now, shame and fear has caught up with them. I dey laugh. But in all, Edevbie should be grateful to Okowa and the PDP, having served the state for eight years, as a commissioner and  chief of Staff and, also as a renowned administrator and proficient manager”

COMMENTARY-I left Delta state 18 years ago, and since then, I have not participated in any serious political activity but strongly believes in political emancipation and sanctity and equity. This can be seen in almost all my commentaries in the National dailies and TV appearances, kicking against bad leadership and lost of foresight.

Meanwhile, the last time I voted in general elections was in 2011. I didn’t vote in 2015/2019 elections because the Independent National Electoral Commission ,INEC failed in their responsibility to issue me my voter’s card, which they transferred from Yaba to Amuwo-Odofin Local Government Area of Lagos State, where I was living then. Now,  I have done same by transferring my voter’s card from Amuwo to my LGA, Ughelli North,  Delta State; to enable me to exercise my civic responsibility while hoping  that they will not deny me the right to vote in the 2023 in Delta state as they did to me in Lagos State. This narrative became necessary as I ponder in the 2023 governorship election in our dear state.

Before going further, I would like to give my little experience  with Olorogun David Edevbie and his political wrong diagnosis and thunder that has turned his political ambition into friction based on wrong ideological calculations by his  sponsors who should  know better that Governor Okowa has long chosen his predecessor before ganging up against the impeached former Speaker, Rt. Hon. Monday Igbuya, who was reckless and could not read political dynamites before him.  He was venomously removed while Okowa and his legislative loyalists installed the current Speaker, Sheriff Oborevwori, whom Okowa anointed as the PDP governorship aspirant come 2023.

The duo has been romancing power while turning  the state treasury into undefined and unreasonable tendencies. Well, only God knows what is behind, as we watch the political scene like the Roman arena where gladiators wrestle for freedom.

Let me trace back my step a bit. I had the opportunity to interact briefly with Chief Edevbie through the telephone in 2019 when I was about to present my book,  ‘Historiography of Orogun, history of the Orogun people in Ughelli North LGA. Also, I had forwarded an invitation to His Excellency, Governor. Ifeanyi Okowa through his office. Thus, when I  spoke with Olorogun Edevbie, who was the then Chief of Staff, he assured me that, in his office, there is nothing like tribalism or favouritism, that since I have forwarded my Invitation, the Governor will honour it. To my surprise, a day to the launching of the book/lecture, which was delivered by Dr. Otive Igbuzor, Chief of Staff to the Deputy Senate President, Sen. Ovie Omo-agege, whom, he also represented titled ‘The Future of the Orogun people’,  Edevbie called me, that the Governor will be represented by the Honourable Commissioner of Urban Renewal, Chief (Barr) Arthur Akpowowo and indeed, the governor launched the book. On his part, the President-General of Orogun Kingdom, Olorogun Barr. Benson Ndakara, who was the chairman of the occasion, applauded the governor and thanked him for bringing some empowerment and development to Orogun and also for honouring the book launch.

That was my experience with Edevbie; a visionary, self-devoted gentleman, scrupulous and accommodating, who believes in strength in diversity but failed to realise that he was working with salient political strategist, Governor Okowa. He forgot that, Okowa has not forgiven him for coming out in 2015 to contest the governorship seat even when he, (Edevbie) knew that, it was the turn of Delta north to produce the next governor. He forgot that former Governor James Ibori, who left power in 2004 with damaged image as an ex-convict , and also looted treasury of our state does not have the PDP structure again in his hands. He forgot that Okowa was ready to prove a point that, he is in charge, of which indeed, he is.

To worse matter, Urhobo Progress Union, (UPU) under the leadership of Olorogun (Dr) Moses Taiga, which ordinary have no business in pressuring who should become governor in 2023 but ensure that candidates are all given a level-playing ground, went ahead on April 17,2022 and did a publication, endorsing the candidature of  Edevbie. Part of it read bluntly, “That after thoroughly examining and analyzing all aspirants, we have, however, reached a consensus that Olorogun David Edevbie, is the best person  for the job at this time”. It went further to beg Governor Okowa on behalf of Urhbos to forgive Edevbie of any wrongdoing, because they knew what happened in 2015. “ We  want to appeal to our Governor, His Excellency, Sen. Dr. Ifeanyi Okowa to forgive Olorogun David Edevbie for any perceived transgression. To forgive is divine. No individual is perfect”

At this point, I knew that the great iroko tree in politics has fallen before dew, I mean,  Edevbie will never get the ticket, which was clear to most political commentators. How can UPU become so indiscretive not to trade with caution that, their roles should be that of  elder statesman and father to all Urhbobos. Now, shame and fear has caught up with them. I dey laugh. But in all, Edevbie should be grateful to Okowa and the PDP having served the state for eight years, as a commissioner and  chief of Staff and also as a renowed administrator and proficient manager.

I will advise him to relax and be bold enough to either decide to quit politics and leave a private life for now while remembering that a rolling stone gathers no moss. He should be courageous to tell his supporters not to loose hope but support a greater Delta that looks like kitchen and ghetto state without meaningful development , even with the huge monthly allocation coming from the Federal government to the state.

On the other part, Sen. Ovie-Omo-Agege has a very bright opportunity, not just as a proven political technocrat  but as a man who has prepared himself for leadership. He has the statesmanship and courage, that, Delta deserves better, to be industrialised, and can be great again.

Deltans must take this opportunity before them or our State will remain in the hands of failed leaders, who are greedy and selfish to the latter. This time, Deltans must not allow opportunistic persons who believe in political luck without strong preparedness for leadership to takeover the state in 2023. We must all educate our people and ensure that destinies of our young progressive Deltans like me return home to invest and teach our people wealth creation. We must defend our conscience and seek the face of God sincerely in our approach. Delta deserves good leadership. We shall triumph and the change we need is within your doorstep.