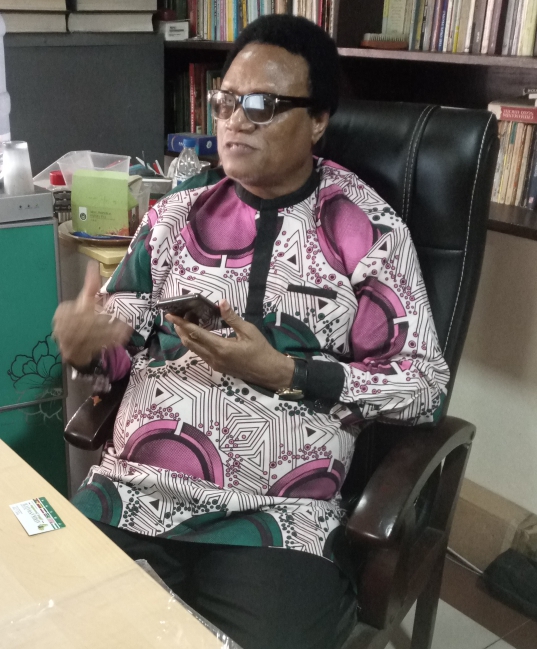 DELTA 2023: I’ll support whoever emerges as governor whether PDP or APC-Prof. Eghagha, says, Urhobos are not betrayers

by afrikanwatchngr@gmail.com
In this exclusive interview with our President/Editor-in-Chief, Mark C. Orgu, during the week is Prof. Hope Eghagha, a professor of English Studies, University of Lagos  at his office, Faculty of Art. Also  a  former Commissioner of Higher Education in Delta State shares his views about the kind of leaders Delta State should produce in 2023... Read More

We need radical restructuring and overhauling of security agencies in Nigeria- Dr. Anyasi

In this exclusive interview with our President/Editor-in-Chief, Mark C. Orgu, during the week is Prof. Hope Eghagha, a professor of English Studies, University of Lagos  at his office, Faculty of Art. Also  a  former Commissioner of Higher Education in Delta State shares his views about the kind of leaders Delta State should produce in 2023 especially the governor. The professor, a coordinator of Urhobo Renaissance Movement (URM) also warned political parties against not fielding Urhobo candidate for the governorship race, noting however the consequence and danger it may portend .  “What I know is that, if PDP or APC fails to produce an Urhobo candidate in 2023, most Urhobo votes will go to other parties and it has happened before. That was how Chief Ogboru got massive votes against Okowa as at the time PDP didn’t produce Urhobo candidate, and it was a narrow escape for Okowa, I think it was a different of 10,000 votes. So, we know.  I am in touch with politicians in the state, I know that if both parties failed to produce Urhobo candidate, forget it” he reiterated.

They say during elections, Urhobos betray themselves for personal gain

Thank you for giving me the opportunity to share my view on the notion of the exceptional rate of betrayer among the Urhobos. First, this view is not correct at all and it is not based on any fact. The first thing is this. Politics is about, ‘who gets what, and about what you get’. It starts from the personal level. When you get into politics, you aim at a position. I want to be a legislator, I want to be a political appointee and others. The second thing is- the people I represent, and the idea that I stand for. Unfortunately, in our society, ideas no longer hold water. 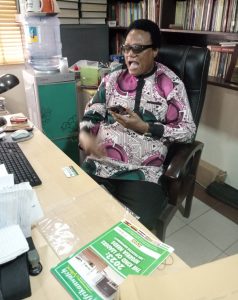 Ordinarily, people’s interest ought to be primary in politics. That is, what am I bringing to the table for my people?  When you want to go into politics, you present yourself. Can Mr. A go into politics, yes, because, he has an ambition. When I realize that ambition, I want to transform the lives of our people. I want to go into politics because I want to address the issue of resources coming from my place and how it has not being used to develop the potentials in my region or area. In doing that, you negotiate through your ward, and through the state, follow by party primary and all of that.

When you are longing for any political position, indirectly, you are projecting yourself. So, it is not true that, Urhobos have the habit of betraying themselves or one another. When it comes to betrayer, let me quote the late,  Dr. Chuba Okadigbo, who said “in politics, when they stab you at the back, don’t stop to ask who stabbed you, just start running because if they stab you and if you stop, they will remove you and stab you again’. That is instructive about politics in Nigeria. There is always a betrayer and there can be last minute betrayer, including last minute change of mind. In fact, delegates can change their mind in the process of negotiation.  In our own clan, it is not directed towards money, ‘what do I intend to gain if I support you, look, I need to get something for myself’’. That is what is debatable   here. When it comes to changing your mind, or any reason of betraying people, or about being treachery, it is not just in one ethic group, it is universal in politics. Yes, we know that the Urhobo people in Delta Central, the majority produced the governor in 1999, that was Chief James Ibori, and he was there for eight years. After that, he handled over to someone else from Delta South. Currently, the North is holding on to power

Now, we are working towards 2023 and naturally, there are many Urhobos who wants to be governor. Within PDP, we have, in APC, we have and what the Urhobos should do is to trim down because if you have 15 candidates going to the primary and all are Urhobos, you diffused the votes, which within the PDP, there is an arrangement to screen down to three. They are trying to do that. We are not going to say because, Mr. Lagbaja is going, Mr. Benson is going, Mr. Owhovogho is going, I would not go, no.  let all contestants come to the field. Then, it is left for the party mercenaries which is what the DC 2023 is doing, inviting all the candidates for screening. They have already agreed to screen the candidates to three, from there, they will get one and as far as I know, all the candidates have agreed to that.

Among the intending Urhobo hopeful in 2023, who is more qualified

I am not going to say that, no, it is personal.

Many believed that in the previous administrations nationally, Urhobos were not recognized in the national politics except now that the Deputy Senate President is bringing back the glory, what is your view.

This is not the first time Urhobo Nation will be recognized in national politics. Don’t forget, that when you have a point man at the centre, that is when you will have appointment. For example, in the second republic we had a very strong Senator, Fred Brume and he influenced quite a number of Urhobo indigenes into national positions. When Prof. Sam Oyovbaire, was a minister of information, he did same but when you are not represented at that level, you don’t get that kind of elevation. We know that the Deputy Senate President’s position is stronger than those positions earlier mentioned and he is using it very effectively to help Urhobo people. And that should be commended.

What do you think should be the criteria for the governorship race?

Anybody that wants to be governor of Delta State should have the experience, competent, popularity, and resources. There are people who have been made governors in the past without any known antecedent and they did well. So, it is a broad field for all of them. My position remains that, let the best candidate win.

So, once a winner emerges, whether PDP or APC, you will support

Yes, of course. If he is the best, I will support him or her. The first step is the primary, and once the candidate wins, he gets into the bigger picture and whoever wins get my support.

Are you saying that anybody whether PDP or APC wins the governorship, you will support such candidate

Now, we are talking generally, whoever emerges in APC, let the person contest election, same with PDP. Whoever wins, I will support.  Meanwhile, who I am going to vote for is a personal thing, is not what I will disclose in the media. Also, whoever wins the governorship seat should remember that Delta State is multi-ethnic, and should be able to galvanize all the groups and represent Delta state at the national level. He should also remember that he is not going to be the governor of just one national ethnic group but Governor of Delta State.

What should the Urhobos do to form alliance with other ethnic groups?

I know there is synergy of persons of interest to ensure that the best person emerges and I also believe that, the Urhobo people are united in the cause of producing Urhobo candidate because the principle of rotation, even if not written, is conventional and it simply follows logic that, from 1999 we had a governor from the central, 2007, we had from the south, 2015, Delta north, which is governor Ifeanyi Okowa. Simple logic is that, power should come back to the central.

What I know is that, if PDP or APC fails to produce an Urhobo candidate in 2023, most Urhobo votes will go to other parties and it has happened before.  That was how Chief Ogboru got massive votes against Okowa as at the time PDP didn’t produce Urhobo candidate, and it was a narrow escape for Okowa, I think it was a different of 10,000 votes. So, we know.  I am in touch with politicians in the state, and I know that if both parties failed to produce Urhobo candidate, forget it. In all of this, the overall interest of the state is more important. There is the notion of power rotation in the country and that is the reason we are saying at the national level that power should come back to the south. And once there is power shift, where you come from shouldn’t matter but Nigeria is a different place. You can see the kind of presidency the incumbent president run now, where it is clear that even a blind man sees the lopsided appointments at the federal level and the suffering of the masses. Is it the insecurity and killings? Somebody appears to be indifferent. The narrative is that, there is a government that is more interested in the survival of his ethic group than the whole nation, and that is dangerous. So for that reason, the people in the south are insisting that power must come back to the south.

If you know that when you get into office and you put things in a mess to favour your own people, another person would come for another 8 years from the other side of the country , and he will correct those mess and if he decides to be small minded, he would undo or put your people at the disadvantage. That is the unhealthy politics we are playing in Nigeria.

90 years of UPU is worth celebrating. The Union is the second oldest in Africa apart from the South Africa popular party, ANC, African National Congress. UPU has gone through its own storm but we have come together and celebrated 90, it is a sign that there is really no faction. We just have one UPU and that is the one headed by Olorogun Moses Taiga. I repeat, there is no other faction, take it or leave it. If you are able to man that kind of celebration with massive support from all the kings, business sector, media, the 23 President-Generals, he is the de facto president of UPU. I congratulate UPU once again and the general Urhobos. Next time, the youth should be highly involved in such celebration and should be integrated better.

For breaking News: Call +2348028592006, 08148704264. Email us @: afrikanwatch122@gmail.com for your interview on national issues, or article, commentary or event coverage. View our services and profile by clicking about Afrikanwatch Network and Service