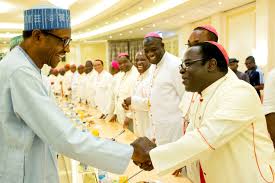 by afrikanwatchngr@gmail.com
-August 7, 2019, news/comments “We frowned on the failure of the Federal Government to deal with herdsmen killings, banditry and kidnapping, which have resulted in the death of many Nigerians and foreigners residing in the country, FG must therefore stop treating the issue of herdsmen killings and other crimes with levity, because such disposition was... Read More

Nzeribe Okegbue to chair IMI annual lecture and award on October 12
52 senators want electronic transmission of election results, as 28 against while 28 absent

“We frowned on the failure of the Federal Government to deal with herdsmen killings, banditry and kidnapping, which have resulted in the death of many Nigerians and foreigners residing in the country, FG must therefore stop treating the issue of herdsmen killings and other crimes with levity, because such disposition was creating panic and fear among Nigerians”

This was the outburst of the Catholic Bishops Conference of Nigeria, (CBCN), who met at the Pope John Paul 11 Pastoral Centre, Ado Ekiti, State Capital of Ekiti State, yesterday. The Bishops also described the situation in the country, as worrisome, especially the unresolved insecurity and incessant killings of innocent Nigerians by herdsmen.

They however expressed serious concern over an alleged attempt by the government to also license and tax places of worship in the country, noting that, it would be unacceptable, because government has hidden agenda to such proposal, that rather than focus on solving prevailing issues like mindless brigandage, banditry, kidnapping and other criminalities currently confronting the nation to erosion of core family values, they intend to focus on fruitless exercise. The statement reads:

: “When this insecurity started, it was in one corner of the country, but now it has gone round the geopolitical zones. What is government doing? If there is no security, there is no reason for government to exist.

“It is unfortunate that Nigerians wake up each day to lament woeful news of killings, lynching, kidnappings and brigandage in the country. Many people, including priests, have fallen victims to this tragically insecure environment”

“The lack of clear pattern of punishing crimes and the lip service to the protection of lives and property on the part of the federal government and security agencies has made many Nigerians to live in fear from day to day.

“There seems to be no end in sight, especially with allegations of killings by Fulani herdsmen being left unattended to. Time is running out for Nigeria if security is not improved. We call on governments, traditional and other civil authorities to please save our country.”

License of, marriage and places worship/freedom of press

“Contemporary circumstances in Nigeria demand that government must approach religious matters with utmost caution as not to be considered partisan and partial on national issues,” They warned the federal government against taking steps that could erode freedom of the press, saying the media should not be gagged under any guise.”

Meanwhile, responding to the situation is the Special Adviser to the President on Media and Publicity, Chief Femi Adesina, who  said that blame game is not an option or self-help on such matter. His words “Every rational voice is welcome in finding lasting solutions to challenges confronting the country, particularly killings by herdsmen, whether alleged or real.

“But in arriving at solutions, blame game is not the way to go. Accusing government of levity, when in fact all hands are on deck, worsens the situation, as it creates panic and fear among Nigerians, which is what the bishops incidentally also decried in their communiqué.“Nigeria has faced many challenges, and surmounted them all, by the grace of God, this too shall pass.”

El-Zakzaky: Let Iran go to hell, Buhari’s govt. is weak-Junaid, says, Buratai and others must go
Previous Post
It is time for Nigerian youth to stand and join politics-Hon. Abadaba