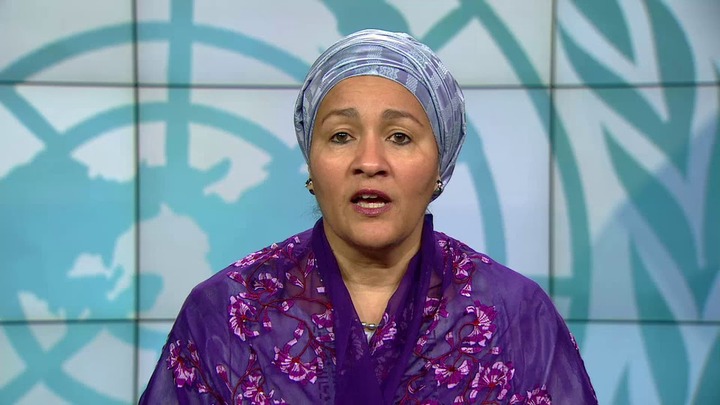 by afrikanwatchngr@gmail.com
“When an activist joins government, government does not necessarily become revolutionary. Things you criticised before joining are likely still there. But one learns to contribute to change in constructive ways” June 28, 2021, News/Comments Nigeria is often in the news for the wrong reasons – insecurity, insurgency, banditry, or even kidnapping of school children.  But... Read More

“When an activist joins government, government does not necessarily become revolutionary. Things you criticised before joining are likely still there. But one learns to contribute to change in constructive ways”

Nigeria is often in the news for the wrong reasons – insecurity, insurgency, banditry, or even kidnapping of school children.  But for the past decade, Amina J. Mohammed, Deputy Secretary General to the United Nations, has been a consistent good news story from Nigeria on a global scale.

Ms. Mohammed was born on 27th June 1961. She was educated in Nigeria and the United Kingdom. She is the mother of 6 and grandmother of 2.

Amina is an accomplished education and development advocate with experience in civil society, the private sector, national government, academia, and the United Nations. She was the founder of Civil Society Action Coalition on Education for All (CSACEFA), an organization committed to universal access to education.

In the private sector, she founded Afri-Projects Consortium (APC) and served as its Executive Director from 1991 to 2001. In Government, she served as the National Coordinator of Education for All in the Ministry of Education, Senior Special Assistant to the President on Millennium Development Goals during the administrations of Presidents Olusegun Obasanjo, Umaru Yar’Adua and Goodluck Jonathan.

In the academic world, she was an Adjunct Professor for the Masters in Development Practice programme at Columbia University. Also, she was the Global Development Advisor the Bill and Melinda Gates Foundation. From 2012 to 2015, she served as Special Adviser to the UN Secretary General Ban Ki-Moon on Post 2015 Development Planning. From 2015 -2017, she served as Minister of Environment in the cabinet of President Muhammadu Buhari from where she was appointed in 2017 as Deputy Secretary General of the United Nations and reappointed for another term in June 2021.

I have known Amina for almost 20 years. We served together in the board of the Commonwealth Education Fund (CEF) in the early 2000s and subsequently worked together on numerous platforms. She established the Centre for Policy Research and Development Solutions as a think tank where I served as a board member.  We also worked together to implement MDGs in Nigeria as well as the Ogoni clean up exercise while she was Minister of Environment.

Amina Mohammed is an extraordinary woman. First and foremost, she is a completely detribalised Nigerian. I take her as my sister, and she takes me as her brother. She has even visited my village in Emonu-Orogun in Ughelli North LGA of Delta State. Secondly, she is a very objective and practical person. She is one of the few people who while in government did not attempt to defend the indefensible. When an activist joins government, government does not necessarily become revolutionary. Things you criticised before joining are likely still there. But one learns to contribute to change in constructive ways. Thirdly, she is passionate about women empowerment and poverty eradication. Fourthly, she is modest and one of the least materialistic people I know. Among the many challenges facing political leaders and bureaucrats in Africa is that greed has become a major determinant in their decision making. This leads to corrupt transactions and under development of the continent. Another key attribute of Amina is that she loves Nigeria. I know that when she was to leave the country for the UN job in 2017, she struggled. Finally, she is a fantastic networker. Despite her busy schedule as DSG, each time she visits Nigeria, she makes time to touch base with her friends, colleagues and the youth.

There is no doubt that Amina Mohammed is good news from Nigeria. And while Nigeria has produced important global leaders, including World Trade Organisation Director General, Ngozi Okonjo Iweala, Alhaji Aliko Dangote, Mike Adenuga and Comrade Ayuba Wabba, President of the International Trade Union Confederation (ITUC), we continue to struggle with political leadership.  Unfortunately, Nigerian professionals and the elite too often avoid politics. As Plato counselled us, if you refuse to participate in politics, you will be ruled by your inferiors. The case in Nigeria was complicated when many politicians, especially activists, refused to participate in the Abdulsalami Abubakar transition in 1999.

In her second term, we challenge Ms. Mohammed to utilise her position, influence, knowledge, and networks to impact the development trajectory of Nigeria. We hope she will bring to bear her expertise and experience in service to the country by mobilising people and resources to help build the next generation of leaders. Indeed, the pervasive poverty, insecurity, underdevelopment, and poor development indices has been blamed squarely on leadership. The next generation of leaders can change that narrative. Nigeria is blessed to have Amina J. Mohammed. We wish her a most happy 60th birthday celebration.

Dr. Igbuzor is the Founding Executive Director, African Centre for Leadership, Strategy & Development (Centre LSD) and Chief of Staff to the Deputy President of the Senate, wrote from Abuja.

16 Plus School Holds Valedictory Ceremony For Graduating Students: Be Optimistic Of The Future-Babalola
Previous Post
MCIP To Train Teachers In Orogun Public Secondary Schools on Technical Education, holds in Aragba on July15-16