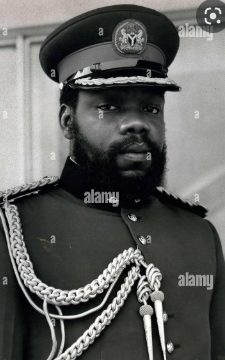 COMMENTARY: Col. Ojukwu’s Memoir On Biafra Should Be Somewhere, By Mark C. Orgu

by afrikanwatchngr@gmail.com
“They also developed their weapon of mass destruction, like the ‘Ogbunigwe’ and other weapons like that to fight the war. The mistake we made as a country then was not harnessing these developments in science and technology and improve on whatever that has been invented and developed. The inventions out of necessity of the war... Read More

“They also developed their weapon of mass destruction, like the ‘Ogbunigwe’ and other weapons like that to fight the war. The mistake we made as a country then was not harnessing these developments in science and technology and improve on whatever that has been invented and developed. The inventions out of necessity of the war were all discarded because of where it was coming from”.

Sadly, the political, economic and social crises that has grieved our country for the past 62 years can be traced from the British Colony to self-created problems. So, one begin to ask why the country has not totally overcome those challenges. How did we get here is what no one can answer.

Why is Nigeria against itself, why are tribes intensifying efforts in killing, maiming, kidnapping, including political recklessness and atmosphere of uncertainties, mostly created by desperate politicians.

Was this not part of what the Late Major Isaac Adaka Boro, Niger Delta freedom fighter, told us in his book, The Twelve Day Revolution, that signs were there after independence that the so called three major tribes in Nigeria were not made to be together, in fact, a total scam of the British arrangement. He went further to say, “Nigeria gained independence on October 1, 1960, and the British Colonialists left bequeathing their administrative mess to an ethnically-based polity, presided over by three  major tribes, the Hausa-Fulani, the Yorubas, and the Ibos, but tribalism is like sand; you hardly build a house on it that endures the test of nature’s element. Nigeria’s foundation was rocked when the big three major tribes at one another’s throat, while the minorities groaned over their deprivation of national cake”.

Many of us saw how  Dr. Onu Ogbonnaya, the former Minister of Science and technology shouted like a wounded dog at the APC Presidential primary; justice, justice, justice, where is equity, where is equity. Indeed, I felt the outburst and the injustice done to the Ibos since inception, that have productively contributed economically more than any region in this country, yet, they are denied the right to govern Nigeria. I agree that, the East  have a general sick of disunity among themselves which is also a factor against their lack of progressives fight like their northern counterpart who always unify against other region to achieve common goals.

Now, some of the issues that led the late Col.Odumegwu Ojukwu, the Biafra leader to fight the 1967-1970 civil war is still very much with us and we can’t deny that fact. A lot about national healing and rebirth is still very far because of the political unwillingness from other zones to allow the East produce the number one citizen of Nigeria. Yes, the East need liberation from marginalization.  Now, they have Peter Obi, former Governor of Anambra state, contesting for the 2023 Presidency. We are watching to see how Ibos will first support their own, who is very much qualify.

In 2019, I had an exclusive interview with an Assistant-Comptroller-General of Immigration, Sir William Igoni Park JP, rtd, published in Afrikanwatch Memoir, where my focus was on the injustice done to the Ibos and the Civil War fought by Ojukwu. Park had told me that, the war was not about liberation but to protect the entire Ibo race.

“The East had to declare to secede and protect themselves from aggression from one part of the country. It was more of self-survival to save a particular race from being wiped out. People were been slaughtered during the pogrom, killed and properties destroyed, because the army felt that those who led the coup that killed some of their prominent sons were from a particular region, the South, so every southerner in the north became an enemy. Since the secession failed, Easterners thought that the federal government of Nigeria would have followed what Gen. Yakubu Gowon said, No victor no vanquished.’

“In the Eastern clave of the secession of Biafra, they developed a lot of technologies, like engine oil, and other technological advancement. They also developed their weapon of mass destruction, like the ‘Ogbunigwe’ and other weapons like that to fight the war. The mistake we made as a country then was not harnessing these developments in science and technology and improve on whatever that has been invented and developed. The inventions out of necessity of the war were all discarded because of where it was coming from. Sadly, in the process, we lost valuable and experienced human capital development that the war brought despite the causalities on human beings. The scientists from the war enclave should have been rehabilitated and invited to improve on their knowledge for the good of the country”

He reiterated that he was trained as a physiotherapist, Plaster technician, and a Medical corp. According to him, the Biafra Engineering Research and Production outfit did improvised a lot of things during the war, and if Nigeria had appropriated them, the country would have become great producer of armament and other technologies but those opportunities were lost because of hate and jealousy. But in all these, one thing that caught my ultimate attention was when the former Immigration boss said: “I think, we missed one thing. Sadly, Col. Ojukwu died without writing his memoir. I think, the Memoir should be somewhere”

This is food for thought for any well-meaning Ibo sons and daughters, and also a great responsibility and burden for the Ojukwu’s family to help go back to their father’s archive and see how they can help Nigerians, especially as we prepare towards the 2023 general election, what he must have told his closest allies, his blue print plan of Biafra’s state, his final words in unifying Nigeria through equity and justice. It must be somewhere or someone should be responsible in holding the memoir, and this is the time to make it available.

South-Eastern states must begin to create internal national rebirth of the region, and harmoniously come out with solid proposal on how to kill the ideas and agitation of Biafra through well negotiated polished plans before the 2023 election while embarking on progressive alliance with the Federal government of Nigeria, and insist on equity and justice. Finally, Gen. Yakubu Gowon should write comprehensively a Memoir on the war, and make recommendations for better national rebirth and total healing for posterity’s sake since he is still alive and the memory and agitation for Biafra has not died naturally like other countries such as Rwanda, Liberia, etc.