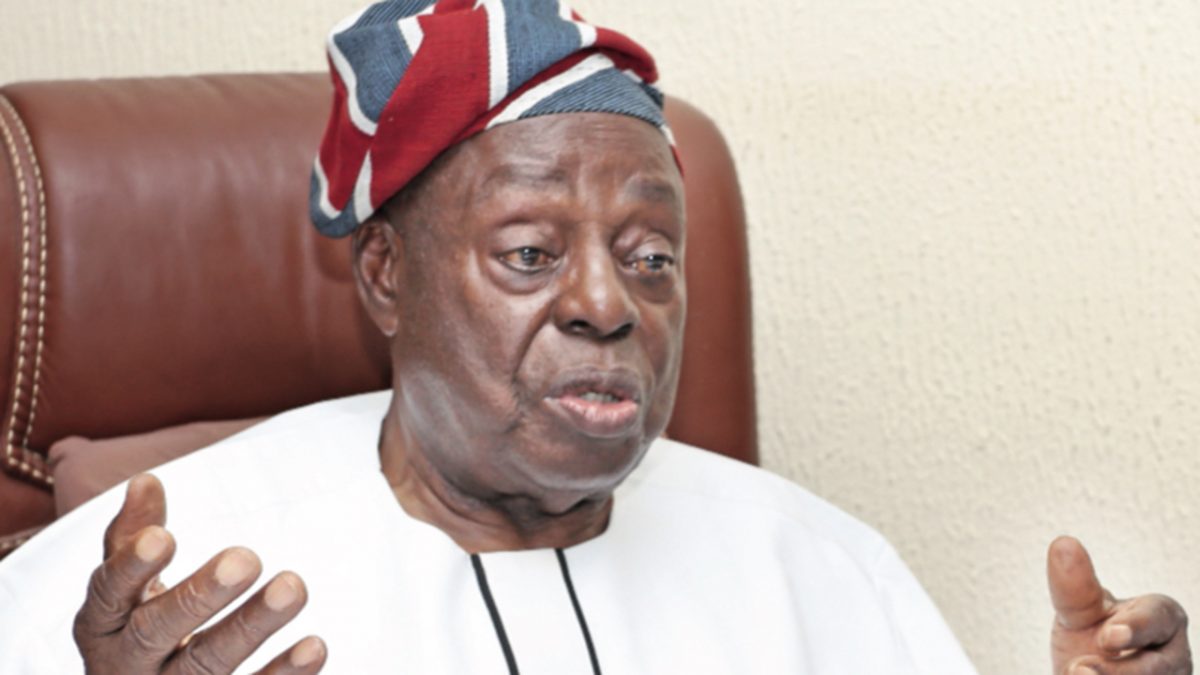 by afrikanwatchngr@gmail.com
“To fully achieve democracy where the will of the people is duly represented in electoral offices, much good will be achieved by making godfatherism and moneybag politics a thing of the past. One way to achieve this is to completely overhaul the system of political funding in Nigeria and to effect strict punitive measures for... Read More

“To fully achieve democracy where the will of the people is duly represented in electoral offices, much good will be achieved by making godfatherism and moneybag politics a thing of the past. One way to achieve this is to completely overhaul the system of political funding in Nigeria and to effect strict punitive measures for any such influence which may undermine the nation’s democracy”

In this commentary, courtesy of Vanguard Newspaper’s Viewpoint authored by a Nigerian foremost Jurist, Pa. Aare Afe Babalola, SAN,  the founder, Afe Babalola University, Ado Ekiti, Ekiti State delved into the failure of Nigerian democracy, championed by godfatherism- a nonsensical approach that has crippled the growth of the country’s nascent democratic process for years.

FOLLOWING decades of military rule in Nigeria together with its attendant socio-political consequences, Nigeria reverted to constitutional democracy in 1999 which saw the advent of politically elected democratic regime. However, democracy in Nigeria has not always been a true reflection of the words of Abraham Lincoln during his popular Gettysburg Address of 1863 as being a “government of the people, by the people, for the people”. Therefore, in this three-part edition, I will identify some of the challenges facing the development of true democracy in Nigeria. This first edition focuses on the interplay between poverty, godfatherism and the influence of money bags on the nation’s electioneering process.

In the Nigerian context, a godfather is one who, either through immense wealth or political goodwill, is able to determine not only the persons that are nominated by their parties to contest election but who in most cases are able to guarantee the victory of such candidates. In ensuring such victory, they may utilise every means within their disposal to purchase votes, cart away ballot boxes, or outrightly pay or intimidate voters to vote for the candidate of their choice. A political godfather in the Nigerian context may even be able to form and finance a political party. Therefore, most politicians will do anything to gain the favour of political godfathers. The origin of godfatherism in Nigeria has been traced to the First Republic to the trio of Dr. Nnamdi Azikwe, Chief Obafemi Awolowo and Alhaji Tafawa Balewa who wielded enormous influence across Nigeria. Through their political parties, they were able to influence the political careers and fortunes of many politicians of the period.

It may even be said that their influence persists till the present day as can be seen particularly in the case of Chief Obafemi Awolowo, by the competition among some political groups in the South-West for recognition as being the most faithful to his ideologies. The handover of power by the military and the commencement of democratic governance saw an overwhelming rise in the incidence of political godfathers, most of whom, prior to democracy, had garnered so much wealth or influence among the elite. Therefore, the Nigerian political landscape had become saturated with the overbearing presence of these demi-gods who do not fail to wield their influence at every opportunity to satisfy their person gains.

Most politicians see political godfathers as the most convenient means of winning elections. However, experience has shown that the patronage of political godfathers carries with it grave consequences, not only for the politician, but also for the public and the political stability of the country itself. Years ago, the Supreme Court intervened to restore the mandate of a governor in the South-west who was impeached by some members of the State House of Assembly, allegedly on the instructions of the godfather who had facilitated the election of the governor in question.

In the South-East, another governor was alleged to have signed documents indicating that he would serve a single term only if supported by a prominent politician in the state. Numerous other examples abound of politicians who have essentially handed-over the functions of their offices to their political benefactors with the effect that most political office holders are hamstringed in the performance of their duties. They must defer to their political godfathers for matters such as appointment of commissioners, appointment into the board of statutory corporations, etc. The influence of moneybags in Nigerian politics continues to hold sway in dampening the hopes of the nation in achieving true democracy. Afterall, the whole idea of democracy is the free will of the people in electing their political leaders, and where such “free will” is manipulated through the influence of political juggernauts, the country is further pulled away from the attainment of the best democratic policies.

Firstly, it accounts for the corruption and violence which have characterised many elections in Nigeria. On the day of the election, the politician who owes his candidacy to such a godfather can count on his ability to deploy enormous wealth in a bid to corrupt electoral officials and the electorate and where these fail, violence will be deployed to bring about the desired result.

Secondly, this invariably leads to loss by the electorate in the electoral process. Many voters before the recent efforts of the Independent National Electoral Commission, INEC, to bring about true reform in the electoral process, had developed strong apathy towards the system. Most voters will, therefore, leave their homes only with the intention of collecting whatever largesse was available at the polling booths and with absolutely no interest in the capacity or ability of whoever is declared the winner of the election.

Thirdly, the politician who eventually wins the election based only upon the backing of his political godfather will feel no obligation to the electorate who in any event might have been disenfranchised in the whole scheme of events. He will, therefore, devote the entirety of his tenure of office to the promotion and satisfaction of himself, his cronies and his godfather. Fourthly, the citizenry will end up being impoverished due to the fact that a leadership that is totally disconnected from the aspirations of the people has been produced by a flawed system. There is, therefore, a synergy between godfatherism, money-bag politics, and poverty.

It is the entire citizenry who suffers the effect of political office holder’s obligation to satisfy the whims of his godfather who, more often than not, are the actual persons in power.  Conversely, poverty does not always stand as a byproduct of godfatherism but is sometimes the enabling factor which paves the pathway for its political acceptance. Since democracy in Nigeria is manifested through party politics, a party which is otherwise unable to fund its own operations, or a politician who lacks the funds necessary to even purchase nomination forms or embark on a meaningful campaign will readily give in to the demands and machinations of a wealthy godfather. It will, however, be noted that the Section 90 Electoral Act 2010 had sought to restrict the influence of moneybags by empowering the Commission to limit the contributions which may be made to a political party by an individual or a group of persons.

Section 91 further stipulates the maximum election expenses to be incurred by candidates who participate at all levels of the electioneering process, i.e., from the presidential to the local government elections. These limits are N1billion, N200million, N40million, N20million and N10million for the Presidential, Governorship, Senatorial, House of Representatives and State House of Assembly respectively. By virtue of Section 91(9), the maximum which an individual or entity can donate to any candidate is N1million. To provide the Independent National Electoral Commission with the parameter to enforce compliance with these provisions, Sections 89 and 92 require political parties to submit detailed Annual Statement of Assets and Liabilities and Election Expenses to INEC.

While it is indeed remarkable that the foregoing statutory provisions exist to curb the influence of godfatherism and moneybag politics, much yet remains to be seen about compliance with these provisions. There is hardly lack of statutory or regulatory framework in Nigeria, but there is a dearth of the enforcement of these statutory provisions by the relevant stakeholders.

Political parties form the very core of the existence of the nation’s nascent democracy and, therefore, any undue influence on political parties from the presentation of candidates to general influence on the electorates will certainly have a ripple effect, not only in the political landscape, but in other related spheres such as social justice, economic growth, among others. While political parties may encourage and accept donations from its members and other supporters in diaspora, it will be necessary for such donations to be scrutinised by the regulatory authorities to avoid the kind of abuse to which such a practice was subjected in the United Kingdom when it was discovered that peerages were awarded to contributors to party funds thereby enabling the benefactors to become members of the House of Lords. To prevent such corruption, the English parliament had to pass the Honours (Prevention of Abuses) Act 1925 into law.

Furthermore, just like other countries like Germany, Sweden, Israel, Canada, Australia, Austria and Spain, activities of political parties may be financed in varying degrees from public funds in order to provide a level playing field for all political parties. Public funding of political parties need not be by direct injection of cash alone. There is what is known as indirect funding by which political parties are allowed the use of public owned utilities for their everyday and campaign activities at little or no cost to them. To fully achieve democracy where the will of the people is duly represented in electoral offices, much good will be achieved by making godfatherism and moneybag politics a thing of the past. One way to achieve this is to completely overhaul the system of political funding in Nigeria and to effect strict punitive measures for any such influence which may undermine the nation’s democracy.