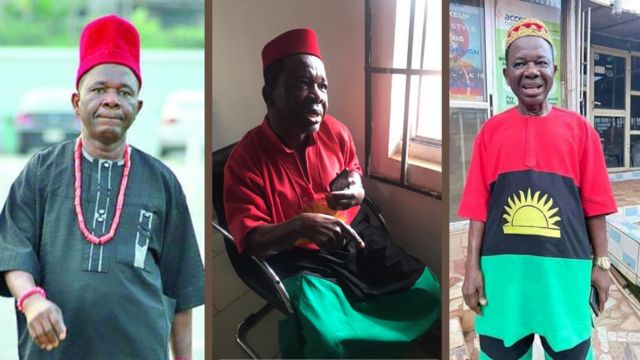 by afrikanwatchngr@gmail.com
-October 16, 2021, News/Interviews/Comments A Nigerian Veteran Actor, Chiwetalu Agu, 65, who was arrested by the Nigerian Army on October 7, at Upper Iweka road, Onitcha, Anambra State, and later transferred to the State Security Service, (SSS) the following day has narrated his ordeal while feeding questions from Punch Newspapers in an exclusive interview.  It... Read More

A Nigerian Veteran Actor, Chiwetalu Agu, 65, who was arrested by the Nigerian Army on October 7, at Upper Iweka road, Onitcha, Anambra State, and later transferred to the State Security Service, (SSS) the following day has narrated his ordeal while feeding questions from Punch Newspapers in an exclusive interview.  It could be recalled that the actor was picked up by the Soldiers, who spotted the actor putting on an outfit with the logo and design of Biafra. In the video circulated, Agu was dragged and manhandled by the Soldiers, who later defended their action, saying that the actor was constituting public disturbance and promoting a separatist’s group. Agu on his part defended himself:

“What I’m wearing is a civil dress. This is not Biafran wear it is a rising sun and not an Eastern Security Outfit, ESN. I know where to go with this outfit. This sun on the dress I’m wearing is just a rising sun because I believe I must rise. I was sharing bread when they came to arrest me, I was not organising any demonstration. Is it wrong to feed the hungry Nigerians?” Agu defended himself.

When asked by Punch Correspondent, to narrate what really happened, Agu, said: I finished a movie shoot in Asaba and I decided to go back to my base in Enugu. As I was driving through the most popular junction in Onitsha, Upper Iweka, I decided to stop for somebody to alight and at the same time share loaves of bread to some people. So, I bought loaves of bread and was sharing to passers-by – four persons to a medium-sized loaf and one big loaf for eight persons. At a point, I bought up to over N10,000 worth of bread. I heard gunshots from soldiers from Onitsha barracks. When I turned, I saw people running away and the soldiers coming closer. They said, “Enter the bus.”  I asked, “What did I do?’’ I discovered that the soldier (talking to me) was the type that does not understand or speak English, so, I said, “I have to be told what I did.’’ And I refused to follow them (soldiers). I sat on the road and then lay down.  (I said,) “If you are here to kill me, go ahead.” They were five soldiers and I’m not a sports person. Eventually, they overpowered me, and took me to Onitsha barracks. One senior officer was looking at me with disdain.  I was in a tight corner in their office, being an entertainer, an actor; so, I was at their mercy. It didn’t take time before they brought an SUV and drove me to Enugu, 82 Division of the Nigerian Army; you can imagine the distance. It didn’t take them time before they organised a panel and started asking me questions. The costume I wore was designed red, black and yellow with a rising sun. My belief is that having come to this world, whatever level you are, you struggle to climb the ladder, you rise and rise like the sun. I was an ordinary actor in 1981 in NTA (Nigerian Television Authority); I made reference to the fact that I have risen. Did you see me in Biafra, in IPOB costume, in military fatigue or whatever? They asked me questions for between nine and 10 hours.

Where the Army kept me and my ordeal in DSS

There was a man, Yahaya, in the place where I was detained. We were in a dirty room, no bed sheet, only torn mattresses. I don’t know the crime Yahaya committed but he was chained. It was a standard room; I decided to manage it because I didn’t go there to fight. I went there to be listened to, not to heighten the crisis. This government acts too much like a combatant; why should you be a combatant when the person you are dealing with is a civilian and is not armed? The President should jettison his combatant approach and handle issues like a father because if the situation is allowed to linger, the agitation for secession would continue to grow stronger. The Igbo have so much to gift Africa; we don’t have to go abroad to bring many things. We have Dr Innoson (Innocent Chukwuma) making vehicles and many other Igbo inventing great things.  Cow business is good but it is not a thing you can use to boast to the international community.

At the 82 Division in Enugu, the interview held in a big office but at the Department of State Services in Abuja, they were taking me from office to office to answer questions. Despite complaining that I suffered from ulcer and can’t eat any kind of food, the things they were bringing for me (to eat) didn’t help my situation. I was released on Tuesday evening when international voices intervened. People like Chief Mike Ozhekome (SAN), who I respect so much; the executives of the Actors Guild of Nigeria intervened – Steven Egbo and Monalisa Chinda came and the DSS handed me over to them and here we are. The DSS seized my phone; there was no communication with my family. It was the most painful experience I’ve had in running my family. As a child of God, I was believing that they would do certain things I used to do: Go to spiritual fathers and once they give them (family members) verses from the Bible,that would be enough. There was nothing like fear. God created this world and nothing would happen to His children who follow his word.

Some of the excerpts are originally from punch and our previous publication.