by afrikanwatchngr@gmail.com
-News/Comments, January 2, 2022. CNN — Ukrainian forces struck the Russian-occupied city of Melitopol over the weekend, opening a new front in Kyiv’s fight to reclaim land in the south of the country and underlining the importance of longer-range weaponry. The attacks struck a number of different locations, including a church being used as a base by Russian forces,... Read More

Xenophobic attacks: Most Nigerians are at the helm of crime syndicates in South Africa-A Nigerian speaks

CNN — Ukrainian forces struck the Russian-occupied city of Melitopol over the weekend, opening a new front in Kyiv’s fight to reclaim land in the south of the country and underlining the importance of longer-range weaponry. The attacks struck a number of different locations, including a church being used as a base by Russian forces, according to the city’s exiled mayor, Ivan Fedorov, who shared a video filmed at night of a fire burning in the distance.“Fireworks in the east of Melitopol,” he said in a post on social messaging app Telegram on Saturday, claiming that 200 people were killed and 300 injured in heavy shelling on the city. 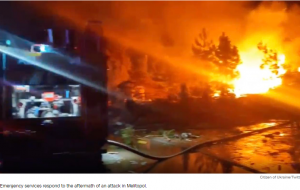 In an interview with Ukrainian television a day later, Federov rowed back on that number, saying that “dozens” were dead. He added that three sites had been hit, including a restaurant-hotel complex on the outskirts of Melitopol, known as “Prival Okhotnika,” or Hunter’s Rest, a checkpoint 20 kilometers (12 miles) from the city in Novobohdanivka, and a military unit that was “completely destroyed” near the village of Semenivka.

Fedorov claimed in an interview on Monday that Russian troops in the city were “panicking” and “redeploying,” given Ukrainian strikes on the city. Without providing any evidence, he said “they are busy moving their military groups to other places to try to hide them.”

Melitopol, a southeastern city on the banks of the Molochna River, fell to Moscow in March soon after the invasion. The city’s mayor was abducted by Russian forces and later released, while a pro-Kremlin administration was installed.

Melitopol lies south of the city of Zaporizhzhia and to the east of Kherson city, which was recently recaptured by Ukrainian troops. It is a major Russian logistics hub and has been in Russian hands for several months, but has come under fire from Ukrainian counter-strikes in recent weeks.

Oleksiy Arestovych, an adviser to Ukrainian President Volodymyr Zelensky, underlined the importance of the city in comments made to local media outlet Feigin Live on Saturday.

“If Melitopol falls, the entire defense (of the occupiers) to Kherson collapses, the Ukrainian armed forces jump right to the border with Crimea on the isthmus,” said Arestovych.

The attacks on Melitopol came as the Ukrainians also struck a hotel, which allegedly housed the Wagner mercenary unit in Luhansk.

Kyiv’s attacks come as Russian strikes ramp up on Ukraine’s power grid, and growing warnings of the energy crisis gripping the country.

Across Ukraine, crews are scrambling to restore energy capabilities faster than Moscow’s troops can knock them out. It’s a difficult, and increasingly dire fight as a long winter sets in.

“All thermal and hydroelectric power stations were damaged, and 40% of the high-voltage network facilities were damaged to varying degrees,” said Shmyhal. “Each of us must realize that this winter we will have to live through with significant restrictions on electricity consumption.”

Russian drone strikes on Odesa, a key port city in southern Ukraine, plunged more than 1.5 million people into darkness over the weekend. Power and water supplies were gradually being restored to the city, but 300,000 still remained without power on Sunday, Odesa Mayor Hennadii Trukhanov said in a statement on Telegram.

“The situation is quite controlled, although not easy,” he said, adding that his administration was re-launching pumping stations and delivering water by truck to zones where shortages continue.

President Zelensky said Sunday in his nightly address that the country’s forces had shot down 10 of 15 drones that Russia deployed over Odesa – a number that could not be independently verified. He called the strikes by Russian drones “critical” and suggested it would take a few days to restore the electricity supply in the region.

“The power system is now, to put it mildly, very far from a normal state,” he said.

The port of Odesa is Ukraine’s key to exporting vital food products, including through its “Grain from Ukraine” initiative, which is aimed at addressing the global hunger crisis.

Ukrenergo, the Ukrainian state run energy provider, reported that there was still a “significant power deficit” in the grid.

“The situation in Odesa region is still difficult, the restoration of power supply to consumers continues,” it said in a post on Facebook, adding that the destruction caused by Russian attacks “does not allow to fully use the capacities of thermal power plants, additional time is needed to restore their work.”