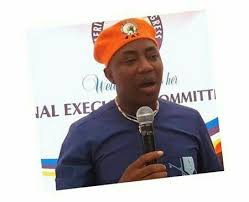 Breaking :Sowore’s lawyer on his usual tactics, can’t dictate to SSS-Retired DSS boss, as Ndakara says, it is contemptuous to disobey court orders

by afrikanwatchngr@gmail.com
By Daniel Njienue, September 25, 2019, news/comments LAGOS-Reacting to the continuous detention of the Publisher of Sahara reporters, Mr.  Omoleye Sowore, whom court has granted bail under certain conditions fulfilled, is a legal practitioner, Barrister  Benson, Ndakara,  and a retired Assistant Director of State Security Service, Mr. Dennis Amachree, MON, who, in their separate reactions... Read More

Let’s Build a Traditional City and Make a Profit

LAGOS-Reacting to the continuous detention of the Publisher of Sahara reporters, Mr.  Omoleye Sowore, whom court has granted bail under certain conditions fulfilled, is a legal practitioner, Barrister  Benson, Ndakara,  and a retired Assistant Director of State Security Service, Mr. Dennis Amachree, MON, who, in their separate reactions via whatsapp when our Editor, Mark Orgu, sent them  messages on the issue,

Ndakara, on his own noted that, DSS has claimed that they have not been served the court order, which he thinks, could be possible. He also reacted to the consequences of flouting various court orders, his words:

“Generally speaking, it is contemptuous to disobey court orders. But the said order must be properly served because the party to be affected by the order will not rely on the Newspaper publications, irrespective of the fact that the party was represented in court by a lawyer or lawyers”

Ndakara, however, stressed that the affected party also has the right to appeal the court order if truly DSS has been served, but disobeyed. In that case, it could file for stay of execution of the court order and Notice of Appeal.  “In the instant case there has not been any report of Appeal.

Making references to several cases that have been flouted by DSS, Ndakara agreed that not obeying court orders is a bad precedent and it amount to a case of human rights abuse. “But I still have confident that the journalist would be released, he concluded”

On his part, Amachree, who has been out of the country for now, said “On the case or issue, the lawyer of Sowore, as his usual tactics, is playing to the gallery. He is the insincere one, but the process is clear. The DSS is not even on litigation. The Ministry of Justice is the arm of government that the court will formally address to either detain or release  Sowore. The DSS is just a keeper of the suspect. Can the Prison Service, or Correctional Service as they are now called, release any prisoner on its own? So the DSS cannot too. Besides, Sowore is due to be arraigned next week, and we tend to forget that the case in point is Treason and no country releases a suspect accused of treasonable felony on bail. Besides the court is aware and cannot commit the DG DSS to prison for contempt because I am aware that no order has been served on the Director-General”.

It could be recalled that Sowore’s lawyer, Mr.  Femi Falana, (SAN), had said earlier that one Ayuba Adam of the agency’s Legal Service Department received the said court order on September 25, 2019 at exactly 10:08am.  Sowore was arrested on August 3, 2019 over his attempt to organize a nationwide protest, which he labelled #revolutionnow. This prompted his arrest.