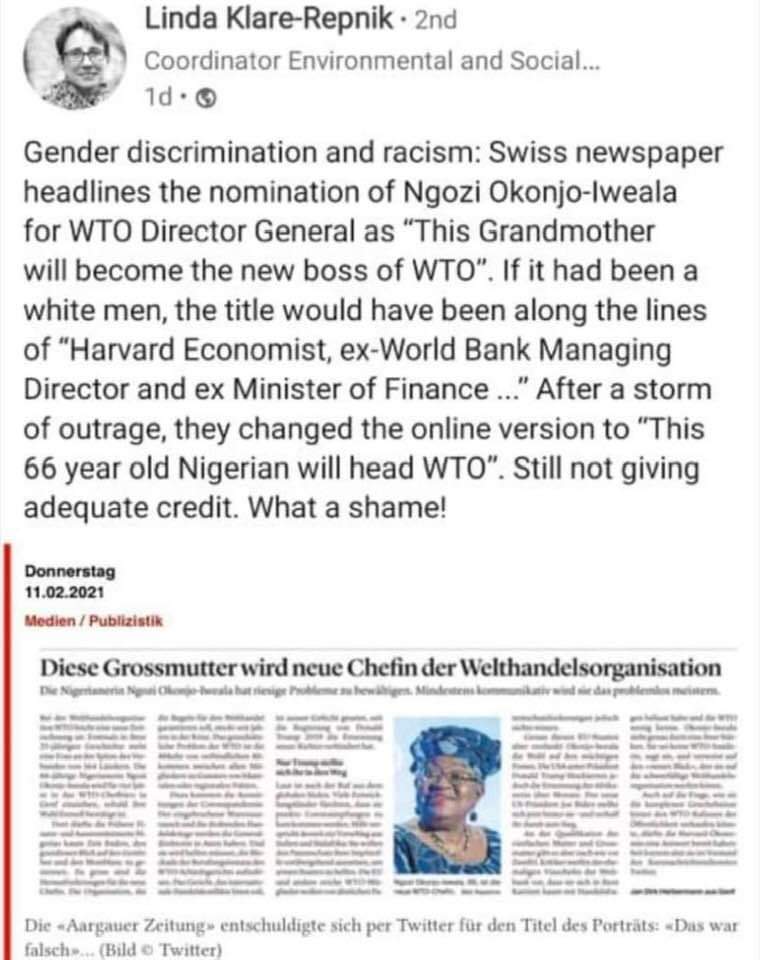 Breaking: Referring to Ngozi Okonjo-Iweala as “this grandmother” is racism-124 International Ambassadors insist

by afrikanwatchngr@gmail.com
-March 1, 2021, News/Comments The first woman and first African to lead the World Trade Organization on Monday has accepted an apology from a Swiss newspapers that had dismissed the seasoned international professional as a grandmother. “It is important & timely that they’ve apologised,” Ngozi Okonjo-Iweala said in a tweet.   New Director-General of the... Read More

The first woman and first African to lead the World Trade Organization on Monday has accepted an apology from a Swiss newspapers that had dismissed the seasoned international professional as a grandmother. “It is important & timely that they’ve apologised,” Ngozi Okonjo-Iweala said in a tweet. 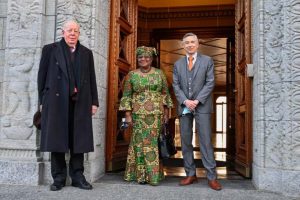 New Director-General of the World Trade Organisation Ngozi Okonjo-Iweala (C) speaks flanked by WTO Deputy Directors-General Alan Wolff (L) and Karl Brauner upon her arrival at the WTO headquarters to take office on March 1, 2021 in Geneva. – Nigeria’s Ngozi Okonjo-Iweala takes the reins of the WTO amid hope she will infuse the beleaguered body with fresh momentum to address towering challenges and a pandemic-fuelled global economic crisis. (Photo by Fabrice COFFRINI

Punch Newspaper had quoted AFP as saying: “Development economist took over as the new WTO chief on Monday after a long, high-powered career serving as minister of finance and foreign affairs in her native Nigeria and 25 years at the World Bank” However, when several Swiss newspapers heralds her appointment last month, they decided the most noteworthy thing to mention about the new WTO chief was as a matriarch” “This grandmother will become the boss of the WTO,”

The headline of the published work by three Swiss Newspapers, authored by Luzerner Zeitung, Aargauer Zeitung, and St. Galler Tagblatt  which described Dr. Ngozi Okonjo-Iweala as “ 66-year-old Nigerian grandmother”  has been tagged by international leaders as  hate speech and racism. The story was published on February 9.

Punch  had also reported that a number of women heads of UN agencies and more than 120 ambassadors in Geneva last week signed a petition calling out the headline as racist and sexist, the paper apologised.

“This headline was inappropriate and unsuitable… We apologise for this editorial mistake,” the paper’s foreign editor-in-chief Samuel Schumacher said in a statement on Friday. Meanwhile, Ngozi in her twitter accepted the apology from the international press that did the editorial.  “thankful to all my sisters, UN Women Leaders and the 124 Ambassadors in Geneva who signed the petition on calling out the racist & sexist remarks in this newspaper “We need to call out this behaviour when it happens,” she insisted, decrying “the stereotypes women face when they take on leadership positions. She said the headline debacle reflected the problems raised in a book she co-authored with former Australian prime minister Julie Gillard called “Women and Leadership.” 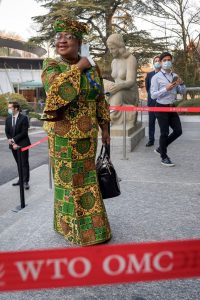 Ngozi Okonjo-Iweala on her resumption