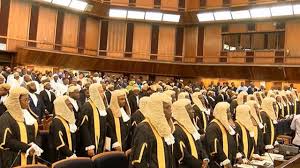 Breaking: Onnoghen : CUPP alleges plan by FG, to use Security to seal-off venue of NJC meeting tomorrow, and intimidate judges

by afrikanwatchngr@gmail.com
February 10, 2019, news/comments As the National Judicial Council (NJC) sets to sit tomorrow to consider whether the suspension of the Chief Justice of Nigeria, Justice Walter Onnoghen by the Federal Government and the acceptance of Justice Tanko Mohammed to take over as Ag CJN without following due process, and to also look at their... Read More

As the National Judicial Council (NJC) sets to sit tomorrow to consider whether the suspension of the Chief Justice of Nigeria, Justice Walter Onnoghen by the Federal Government and the acceptance of Justice Tanko Mohammed to take over as Ag CJN without following due process, and to also look at their responses against allegations leveled against the two justices. It could be recalled that senior lawyers have alleged the two incidences as a “coordinated coup and conspiracy against the judiciary” especially Justice Tanko who many lawyers have accused as part of the coup against the judiciary.

It is of this that  the opposition political parties under the aegis of the Coalition of United Political Parties (CUPP) on Sunday (today) alert Nigerians of the plan of the Federal government to use security agents with a cooked plan to disorganize the sitting, with an excuse of what they call : “acting on security intelligence”  CUPP also noted that the plan is ongoing to seal-off the venue for the meeting tomorrow, using an Assistant Inspector-General of Police and another senior officer from the department of state security service, ( DSS). This was made known by spokesman of the CUPP Imo Ugochinyere. The state reads:

“The security agents are to claim that there is intelligence of a possible breach of security which would warrant the increased security. “They are to coax, coerce and show some members their unfavourable security reports to get them to do the bidding of the government.

“This latest decision was informed by the fact that the Federal Government is aware that the Nigerian opposition has obtained further evidence to prove that the removal of Justice Walter Onnoghen from office by President Buhari is merely for political purpose having failed in a bid to recruit the CJN to support the APC and use the exalted office of the Chief Justice to unduly favour the Party and the President in the post 2019 Supreme Court election petition appeals. Knowing that they do not have anything on the CJN, they have resorted to strong-arm tactics, intimidation and harassment.

“It has come to light that the Interim Investigation Report which was intercepted by the opposition was actually a report of a former investigation by the EFCC which was found to have no merit and which was discarded but was now doctored by the EFCC Chairman and submitted to the President as a purported indictment of the CJN.

“A copy of the statement issued by the former spokesperson of the Commission on September 6, 2017 clearly showed that the EFCC had investigated the CJN following his appointment as Acting CJN and had discarded the petitions after full investigations.

“The Chairman of EFCC is simply framing the CJN in a bid to help shield the Presidency from the obvious unconstitutional act of the removal of the CJN.”

“The report also shows that President Muhammadu Buhari was aware of the investigation both at the EFCC and the Code of Conduct Bureau and exposed the fact that the Vice-President Pastor Yemi Osinbajo was not telling the truth to the entire nation and the world when he publicly claimed that the President was not aware of the activities of the investigating agencies concerning the CJN. Both the Vice President and the EFCC Chairman ought to tender their resignations having been exposed indubitably to have lied to the nation so as to save the government some shame and reference as a lying government. It is now categorical that the government manipulated institutions of state to frame up, blackmail and tarnish the image of persons who refuse to be recruited into their unpatriotic plot.

“Now that the truth has been laid bare, the Nigerian opposition declares that the unlawful and unconstitutional removal of Justice Walter Onnoghen from office by President Muhammadu Buhari was merely a political move and was completely unconnected to any fight against corruption. It is clear that the travails of the CJN is politically motivated, an afterthought, a witch-hunt and a calculated attempt to continue the unwarranted attacks and harassment of the head of the judiciary and third arm of government because he refused to yield his office for trading of judgments and judicial reprieve.

“The factional CJN Tanko Mohammed is now yielding the office of the CJN to the Executive to manipulate the NJC meeting for his own personal gain and to reap the fruit of the illegal forced suspension of Justice Onnoghen. Nigerians are reminded to keep vigil over the venue so that the last hope of the common man is not conquered. Also the members of the NJC are the last line of defence for the judiciary and they bear the burden of standing firm to resist this invasion by these political barbarians by sacking Justice Tanko Mohammed from the bench for conniving to breach the NJC guidelines and the 1999 Constitution. The plot to use security agents to attempt to intimidate members of the NJC is reprehensible, condemnable and repugnant and must be dismantled immediately as continuing with it will be one abuse too many in a constitutional democracy,”

Just-in:US issues a warning to INEC, says, the will of Nigerian people must prevail
Previous Post
Northern Stakeholders Forum’s endorsement of Atiku is never a mistake –Aminu