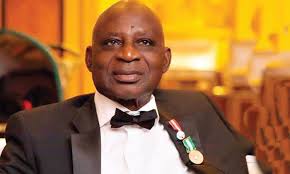 by afrikanwatchngr@gmail.com
-May 12, 2019, Interviews/news/comments, Speaking with our editor-in-chief, Mark C. Orgu, on a telephone conversation during the weekend is, Femi Okurounmu, who was elected Senator for Ogun Central constituency , Nigeria, at the start of the Nigerian Fourth Republic, under the party,   Alliance for Democracy (AD),  between 1999 to 2003. The unrepented critic of bad... Read More

Speaking with our editor-in-chief, Mark C. Orgu, on a telephone conversation during the weekend is, Femi Okurounmu, who was elected Senator for Ogun Central constituency , Nigeria, at the start of the Nigerian Fourth Republic, under the party,   Alliance for Democracy (AD),  between 1999 to 2003. The unrepented critic of bad government, who, over time has criticized President Muhammadu Buhari for his leadership style, that seems to would have put many Nigerians in pain, agony and sufferings. In this interview, Sen. Okurounmu wondered why we keep talking and talking without action; hear him “We just have to change from just talking and talking. These people in power have their ill agenda and they will continue to do what is in their mind”

“I am tired of talking year in year out, we know them already, including pattern of behavior, we know they have already stared the judiciary to deliver whatever judgment in their favour in various election tribunals across the country, Osun state is an example to this evil agenda. Thus, what they are doing is not a surprise to many of us who are not comfortable in this visionless government, and it looks like nothing can be done. Some of us have become impotent, and cannot do anything, rather than just talk, and when you talk, it seems you have done something. However, talking is not an action. If only talking is what we can do, then, we are helpless”

Asked if all hope is lost, the senator noted that if all hands are on desk, then, the situation can be saved. The senator who accused the media of not doing enough said “ The media men just want to get news and sell their newspapers, but will not join in taking action as well” There is nothing happening now that we didn’t envisaged, but people didn’t listen to us because of their selfish interest”

He also berated young Nigerians who have decided to compromise their destiny:” where are the young men of today, what are they doing, or as the saying goes, if you can’t beat them, join them, so they have joined in keeping silent while they are dying inside.

Juicy position to the Yorubas

What do you mean by juicy position, if you have a juicy position under a slave master, then, congratulation.  The way it is now, clearly shows that Nigerians are slave to the Fulanis. I know very well, that those benefactors of Buhari’s administration would not agree because they are short sighted. Don’t forget that slave master will continue to feed his slaves, so that, they can continue to work for them. In fact, many people in Yorubaland today have become a leading apologists in Buhari’s administration. Those who are supposed to lead us in fairness are the leading apologists from Yoruba elites in this government.

Speaking on presidential election tribunal, sen. Okurounmu said, that nothing good will come of the tribunal, “ it is common sense to know that; because the president of court of appeal who is going to give judgment will compromise, because his husband is a friend to the complainant and a senator under the ruling APC. We cannot continue like this unless we want to keep suffering and smiling. Therefore, it is my advice that if Nigerians feel well comfortable in this APC led government,  they will know what to do.
For breaking news, call 08028592006, email us: afrikanwatch@gmail.com and afrikanwatch122@gmail.com. Follow us on twitter : @afrikanwatchm, facebook: afrikanwatch Media, afrikanwatch, www.afrikanwatch.com, instagram, @afrikanwatchm