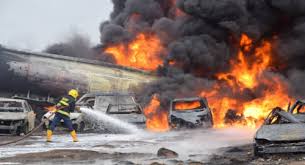 by afrikanwatchngr@gmail.com
By Angel James, March 16, 2020,news/comments. LAGOS-It was a black Sunday for Lagos residents as 15 persons have been reported dead, including a family of four reported to have been recovered from the scene of the yesterday’s pipeline explosion in Abule Ado area, under Amuwo-Odofin Local government Area of Lagos State. Moreover, our correspondent who... Read More

COVID-19: Western interventions may not be ideal for Africans-Nigerian-USA Nurse, Oservwe, says, Africa lacks data base of her citizens

LAGOS-It was a black Sunday for Lagos residents as 15 persons have been reported dead, including a family of four reported to have been recovered from the scene of the yesterday’s pipeline explosion in Abule Ado area, under Amuwo-Odofin Local government Area of Lagos State.

Moreover, our correspondent who spoke to some of the residents in the area said that, they suspected foul play on the explosion, stressing that how can explosion vibrate and tremble all the way to Satellite closes, and down to its environs, ‘’it is nothing but a suspected bomb’’ they said.

However, Afrikanwatch reliably confirmed the partly pulling down of roofs ( altar and where congregation were sitting during the 8am mass)  at  Saints Micheal, Rapheal and Gabriel  Catholic church, Satellite town; a ten or fifteen  minutes’ walk from the scene of the blast.

On its part, the National Emergency Management Agency (NEMA), reportedly said that, at least 60 students of Bethlehem Girls College sustained various degree of injuries and had been taken to the Nigerian Navy Reference Hospital at Ojo Cantonment for treatment.

Disclosing this yesterday to newsmen is the Acting Coordinator of NEMA in Lagos, Ibrahim Farinloye, who stressed that the victims, which include a couple and their two sons, were caught by the explosion on their way to church at about 9:00 a.m. on Sunday.

He stated further that, more than 50 buildings, including Bethlehem Girls College and a famous hotel, were mutilated in the explosion. His words:

“The resulting fire later spread to the Nigerian National Petroleum Corporation (NNPC) oil pipeline passing through the area even though the pipeline has been shut down as a precautionary measure. “The fire was eventually extinguished at 3:30 p.m. through the combined efforts of officials of the Lagos State Fire Service, Federal Fire Service, and Nigerian Navy Fire Tender.”

In same vein, Vanguard newspaper had reported that a Staff Officer of the Western Naval Command, Rear Admiral Oladele Daji, had told journalists that,   students brought-in on an emergency ground were already stabilizing at the Navy Hospital. “Those who have fully recovered would be discharged soon”. He added. But what is yet to be cleared is whether it is only explosion or a pipeline vandalisation or a bomb blast.

Breaking: ASUU and FG on a closed-door meeting to end strike
Previous Post
Institute of Transport & Magt. tech. to inaugurate its alumni association in March 21