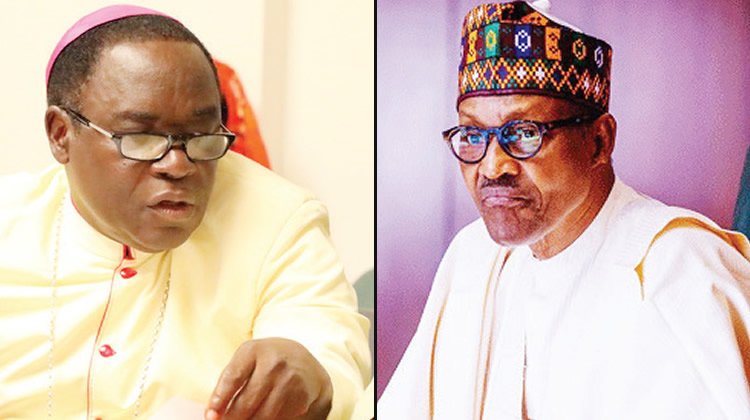 Bishop Kukah’s Invitation by DSS over Christmas Sermon is fake-Cath. Diocese of Sokoto,

by afrikanwatchngr@gmail.com
By Mark C. Orgu, News/Comments, January 11, 2022 The Director of Social Communications in the Catholic Archdiocese of Sokoto, Rev Fr Christopher Omotosho, has  advised members of the general public to ignore the rumour paddling around about the Invitation of the Department of State Services, DSS, to the Bishop of the Catholic Diocese of Sokoto,... Read More

The Director of Social Communications in the Catholic Archdiocese of Sokoto, Rev Fr Christopher Omotosho, has  advised members of the general public to ignore the rumour paddling around about the Invitation of the Department of State Services, DSS, to the Bishop of the Catholic Diocese of Sokoto, Most Rev (Dr) Mathew Hassan-Kukah, describing it as fake news. In a statement released to newsmen recently, Omotosho asked the public to  blatantly disregard such news, that Kukah has not received any invitation from the service in any format.

“The news that the bishop was summoned for questioning by the DSS regarding his Christmas message cannot be true, because the bishop is yet to receive either a call or mail from the DSS,” he stated. It could be recalled that the social media was agog with the news of the invitation during the weekend, even as threats come from the youth wing of the Christian Association of Nigeria (YOWICAN), reiterating that, they will mobilise their members across the country to accompany the fiery Bishop to DSS office if the said invitation were true.

He Department Of State Services And The Continued Clampdown On Dissenting Voices: A call for total overhauling.

The Youth Wing of the Southern Kaduna People’s Union (SOKAPU) has continue to observed with dismay the operations of the Nigerian Department of State Services (DSS) in recent times and the mysterious deaths of persons whom had at one time or the other accepted it’s invitations particularly persons considered to be critical of the nepotistic and clandestine leadership style of the Buhari administration.

Lately we mourned the sudden demise of Dr. Obadiah Mailafia of blessed memory who until his death was a dogged critic of this administration and a regular visitor at one of  the  DSS facilities. Without rulling out any possibility  of harm, we consider the invitation of Bishop Kukah by the DSS as one of such ploy designed to silence him at all cost.

While we urge the Bishop to ignore such invitation by the DSS for the obvious reasons of threat to life and personal safety, we are urging the DSS to focus on the ravaging impact of insecurity, kidnapping and banditry across the country rather than distracting the Bishop who is only pointing the obvious about the decaying state of the country’s security architecture. It is rather unfortunate to note that with the recent declaration of bandits as terrorists by President Buhari, we had anticipated an invitation from the DSS to the likes of Sheikh Gumi who has always fronted and still fronts for terrorist bandit groups but reverse is however the case.

In light of the above, it suffice to state boldly that the DSS has unarguably deviated from it’s core mandate of protecting national security and has become a willing tool for the suppression of free speech. We therefore call  for an independent investigation into the activities of the Nigerian Department of State Services with a view to restructuring the Institution and it’s mode of operations in line with global best practices.

In the same vein, Afrikanwatch Network in a text message to one of the top DSS retired officer, doubted the invitation, and tagged it fake

Crime: An Alleged YahooBoy killed and  plucked out girlfriend’s eye and others for ritual
Previous Post
No sit-at-home on January 19 and 20-IPOB