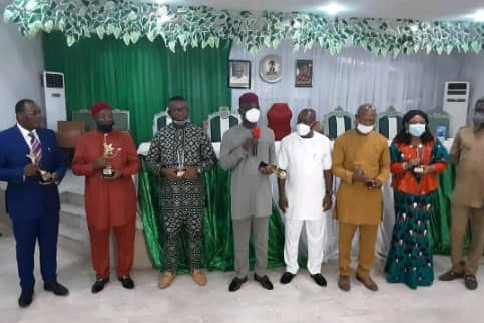 Award: You have proven your worth in Abia State-Deputy gov. Oko Chukwu tells Amb. Okegbue JP

by afrikanwatchngr@gmail.com
By Daniel Njienue, News/Comments, January 22, 2021 Umuahia- A Lagos based Security expert and United Nations-POLACE Peace Ambassador, Chief (Dr) Nzeribe Okegbue JP has been honoured by the government of Abia state for human capacity building and wealth creation in the state especially on real estate and security. The event which was put together by... Read More

Umuahia- A Lagos based Security expert and United Nations-POLACE Peace Ambassador, Chief (Dr) Nzeribe Okegbue JP has been honoured by the government of Abia state for human capacity building and wealth creation in the state especially on real estate and security. The event which was put together by Governor Okezie Victor Ikpeazu Body of Advisers, an Umbrella Body of Special Advisers in the State is aimed towards recognizing Sons and daughters of Abians, who are bringing honour and pride to the State. 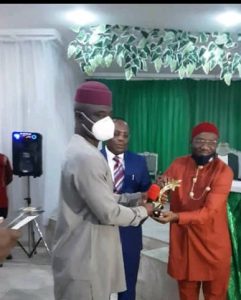 Meanwhile, the Chairman of the body, Mr. Collins Nwakanma has admonished Abians to always think about coming home to invest and create opportunities for youths, stating that, one of the reasons for recognizing Abians who have distinguished themselves in their areas of calling became a major criteria for the award selection and honour, which he described as patriotism and sacrifice to fatherland.

Dr. Okegbue who received his award from the Deputy Governor of the state. Sir. Ude Oko Chukwu applauded his humanitarian gesture and patriotism towards joining hands with the government and stakeholders to creating wealth and youth employment in the state, stressing however, that he ( Okegbue) is a blessing to Abians, as he encouraged him never to relent on his good and kind hearted deeds.  In his remark, the Ambassador expressed warm appreciation to the government of Abia state, reiterating that any well-meaning Abian, would see the need to invest in the State and create employment. He stressed that he will continue to do the needful and support the government in his developmental strides. 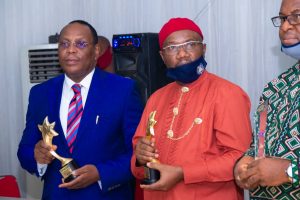 Speaking with Afrikanwatch Network after the award ceremony in Banquet Hall, government House, Umuahia on a telephone conversation, Dr. Okegbue said, that the award is a sign that his efforts in building most of his investments in the state is being recognized” It is good that this award is coming this time, and truly, I thank God for it, and believe that when we join hands in supporting government, especially on youth employment and wealth creation, it reduces the burden on government. I encourage my Abia brothers and Sisters to come back home and invest. This award will encourage me to do more”, he concluded. The Ambassador who is the MD/CEO of Combatant Guards Limited has empowered Nigerian youths in the last five to ten years, mentoring and encouraging self-development, wealth creation and employment, including sponsorship to organisations.