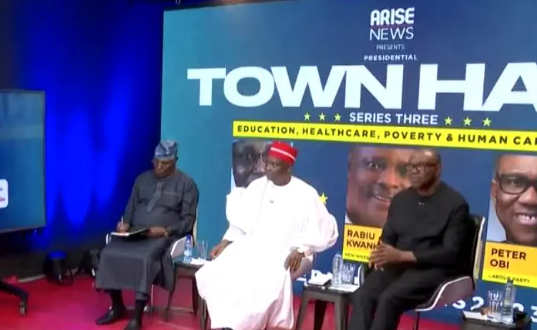 by afrikanwatchngr@gmail.com
December 5, 2022, News/Comments ABUJA-The presidential candidates of the Peoples Democratic Party, PDP, Atiku Abubakar; Labour Party, Peter Obi, and New Nigeria Peoples Party, NNPP, Rabiu Kwankwaso, have all agreed that security and proper education are required to pull Nigerians out of poverty. They said this while responding to questions on the Arise TV Presidential... Read More

They said this while responding to questions on the Arise TV Presidential Town Hall Series, on Sunday. In his submission, Kwankwaso said for the NNPP, education has always been key in the party’s plan to pull people out of poverty.

He said, “Education has always been key for us in pulling people out of poverty. I’m not surprised that we have 133 million poor people (out of a population of 200)” :If you talk to road side economists they will tell you the figure is much higher.”

This, he said, would be reversed when he gets the chance to become president, noting that he did this successfully during his time as two-term governor of Kano State.

In the area of security, he said if given the chance he would increase the number of security personnel across board and properly equip them to perform their duties

Speaking on the same subject, the candidate of the Labour Party, Mr. Peter Obi, said the Federal Government should take the lions share of the blame for the growing poverty in Nigeria.

This, he said, is because it controls the issue of fiscal policy as well as the issue of security which has degenerated to a point where farmers can no longer go to the farms.

He also lamented that investment in education has remained poor over the years. This, he said was largely responsible for falling standards and growing poverty.

The LP candidate said when compared to South Africa, Nigeria’s investment in education is abysmal.

He said, “Our investment in education is low, its about N3.6 trillion in the last six years, which is less than 10 percent.

“In South Africa, they invested about 380 trillion rands, which is about 14 to 16 percent of their budget.”

Speaking about his plans to deal with the challenge of the scary rate of out of school children, especially in the north, Obi said, “Most of these children studied Quran.

“And if they studied the Quran, it means they are intelligent. I will meet them at this point and give them skills.”

He also expressed the view that increasing the number of security personnel will go a long way in dealing with our security challenges.

In response to the same issues, the PDP candidate, Atiku Abubakar, said he would use available statistics to deal with the issues.

According to him, investments in education and security would go a long way in addressing the poverty challenge.

He said, “We have all the statistics. We have to get our children educated by the time you educate them they become readily available for the private sector to recruit them.

“Here again you have to give incentives to the private sector.”

Atiku maintained that under his administration, he would provide incentives to the private sector most of which would go to the Small and Medium Scale Enterprises to encourage young people to set up businesses and grow them to create employment.

He recalled that during his time as Vice President, he commissioned a study which proffered solutions to the high number of out-of-school children, especially in Northern Nigeria.

Atiku, however, expressed sadness that none of the northern governors took steps to implement the report which would have gone a long way in substantially reducing the number.

However, the presidential candidate of the All Progressives Congress, Asiwaju Ahmed Tinubu has once again shunned the event.

The APC candidate left Nigeria on the eve of the event just as his media team explained that he was going for an event at Chatham House, in London.